Miltary police have arrested five new SAT union members in Andalusia, at the call of far-right politicians, for their participation in the actions of supermarkets
Sánchez Gordillo has told Canal Sur Radio they give an “ultimatum” to the central government, so that warns, “or the government takes out a decree in the coming days or from the next week to allow all foods, five days before they expire, are delivered to Caritas or Red Cross or other NGOs, or the union will continue to occupy farms, banks and supermarkets. ”
In the actions of the supermarkets  Marinaleda Mayor (Seville) also took part, and member of IU  (United Lefty Party) in the Andalusian Parliament, Juan Manuel Sánchez Gordillo, who is 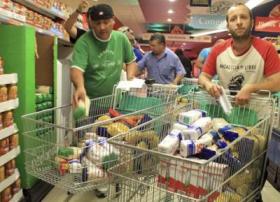 due to receive a subpoena.

The SAT (Independent Agricultural Workers Union) also demanded  “the creation of a basic income for families who do not have a minimum income for all its members are unemployed.”