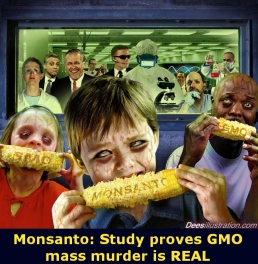 In a stunning development farmers in Kurukshetra, India, where field trials of Monsanto’s GM corn forced the Haryana Agriculture University authorities to fulfill their promise on completely destroying the field trial today.

This happened after a day long drama where Monsanto’s officials with the support of University staff tried to sneak out the GMcorn from the field trial this morning. Alert villages stopped them. Hundreds of farmers under the leadership of Gurnam Singh, state president of BKU, surrounded the research station when the news spread that Monsanto is stealthily removing its GM corn from the trial site inside the research station.

They forced the University authorities to comply with the promise given to the agitating farmers yesterday that the field trial will be completely destroyed without even a single cob of corn being taken out. The original data sheet has also been destroyed. This finally happened at 4.30 pm in the presence of the Deputy Director Agriculture, Shahbad, Kurukshetra.Yesterday hundreds of farmers from Bharat Kisan Union carrying banners and monster corn placards reading “Monsanto GM corn Quit India” gathered together in a peaceful protest outside the Regional Research station of Choudhary Charan Singh Haryana Agricultural University (CCHAU) at Kurukshetra, to show their resentment towards open air field trials of genetically modified (GM) corn in the state.

American multinational seed giant, Monsanto, was conducting the open field trials of its herbicide  tolerant GM corn variety in the research station here. The farmer’s protest comes close to the heels of the recommendation of the Supreme Court Technical Expert Committee (TEC) to put a 10 year moratorium on all field trials of GM crops in India owing to the potential risks involved.

Using its colossal market power, Monsanto craftily penetrated into the Indian markets. Monsanto convinced the Indian government that its GM seeds would produce better crops. According to a report by Farm Wars, one former Managing Director of Monsanto claimed that Monsanto manipulated research data “to get commercial approvals for its products in India.” Indian regulatory […]  READ MORE CLICK HEREMonsanto swindle