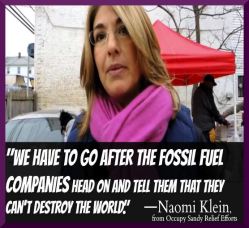 (extract from George Monbiot’s article with References and Comments)

”Preventing climate breakdown – the four, five or six degrees of warming now predicted for this century by green extremists like, er, the World Bank, the International Energy Agency and PriceWaterhouseCoopers (1 , 2 , 3 ,  ) – means confronting the oil, gas and coal industry.”

The only realistic way to do this is by making further development unprofitable.

This seems impossible, even if extraction were to be limited by a world agreement, scarcity would drive prices up and make evasion eminently profitable, to companies who are anyway more powerful than many nation states.

One step forward is the movement in the US for Disvestment by Companies, Universities and Local Administrations, as it becomes ever clearer that the future of the planet really is being destroyed. (See article HERE Campaign to de-Invest from Fossil Fuel Climate Criminals )

”It means forcing that industry to abandon the four-fifths or more of fossil fuel reserves that we cannot afford to burn ( 4 ). It means

cancelling the prospecting and development of new reserves – what’s the point if we can’t use current stocks? – and reversing the expansion of any infrastructure (such as airports) that cannot be run without them.”

Disvestment is not enough. If public opposition is indeed the only ‘wild factor’ that could stop climate suicide, (see Divestment article) then the opposition needs to grow many times over and employ all tactics possible, legal campaigns where possible, and where not, all kinds of anonymous, subversive and even guerrilla tactics need to be used.

The ”1%” behind fossil fools are as tough as they come and practically control the US government. Witness the now accepted fact that the Iraq war was fomented by the Big Oil lobby, the deaths of hundreds of thousands of innocent people was not

considered an impediment if control of Iraqi Oil were the prize.

The eco-resistance movement in the US is practically non existant , however these corporations do have real people in charge, who often consider themselves”good” people and are vulnerable to community pressure

New oil and gas fields and fracking need to be stopped in their tracks, by all means possible, the future of all species including humans is at stake. Evey attempt even at new exploration or pipelines needs be massively resisted.

In Europe right now there is potential for broad resistance to the disgraceful fracking offensive now planned by the greedy moneymen and governments, which could unite and self train an autonomous opposition and be a good example.

”The 1000-year legacy of current carbon emissions is long enough to smash anything resembling human civilization into splinters( 5 ). Complex societies have sometimes

survived the rise and fall of empires, plagues, wars and famines. They won’t survive six degrees of climate change, sustained for a millennium ( 6. see below).

In return for 150 years of explosive consumption, much of which does nothing to advance human welfare, we are atomizing the natural world and the human systems that depend on it.”

In these lines George Monbiot, the eternal optimist and activist, becomes a Prophet of Doom. And he has the right to that, having written books and countless articles promoting public awareness and resistance to climate chaos, only to see things get rapidly worse every year. Plus of course Climate Change is only a part of a host of environmental catastrophes and mass extinction already under way.

In this article he does not go into the alternatives.

The hope is that by making Fossil Fuels much more expensive, physically, morally and politically, we can force these bastards

to abandon their money spinner in favour of renewables, a reformist solution, but one which could in theory at least buy time.

Wind, sun and geothermal energy could easily replace oil, coal and gas for making electricity. Energy for transport could be obtained from proven cheap and pollution free technologies, electric from renewable charged batteries, or the long suppressed NH3 fuel, which has always existed as a CO2-free and clean air alternative see blog http://co2freefuelexistsnow.wordpress.com/

REFERENCES FOR ‘Leave It in The Ground’ section 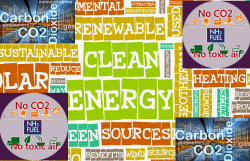 1. Potsdam Institute for Climate Impact Research and Climate Analytics, November 2012. Turn Down the Heat: why a 4C warmer World Must be Avoided. Report for the World Bank. http://climatechange.worldbank.org/sites/default/files/Turn_Down_the_heat_Why_a_4_degree_centrigrade_warmer_world_must_be_avoided.pdf

6. I’m speaking loosely here, as Solomon et al propose that not 100% but around 40% of the CO2 produced this century will remain in the atmosphere until at least the year 3000. On the other hand,

unrestrained emissions and global warming will not stop of their own accord in 2100: temperatures could rise well beyond 6C in the following century: without sharp mitigation now, we’re setting up 1,000 years of utter chaos.

7 thoughts on “Make them Leave it in The Ground: How We can Resist Climate Suicide”