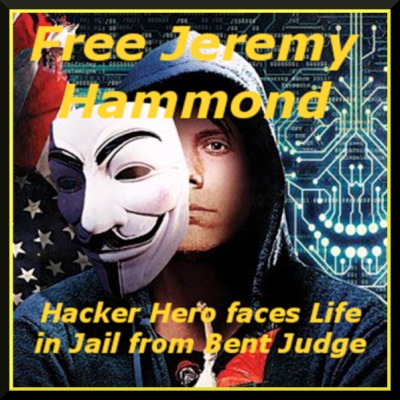 On the evening of March 5th, 2012, more than a dozen federal law-enforcement officers broke down the door of a small brick house on the southwest side of Chicago and arrested Jeremy Hammond, a 27-year-old anarchist and computer hacker. Six feet tall and lanky, dressed in a purple T-shirt and cool trousers – a signature style one of his female friends.

He’s now facing life imprisonment, under a biased Judge whose husband was one of his victims.

Even before the arrest broadcast his name worldwide, Jeremy Hammond was well-known in enlightened circles. An early champion of “cyber-liberation,” he had been described by Chicago magazine at the age of 22 as an “electronic Robin Hood” after he was sentenced to two years in federal prison for hacking a conservative website and making off with 5,000 credit-card numbers, intending to charge donations to progressive causes. 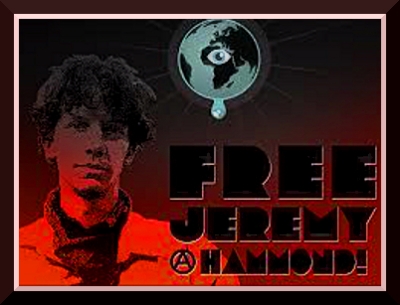 But unique within the hacking fraternity, Hammond is also a real-life revolutionary: a “modern-day Abbie Hoffman,” in the words of his friend Matt Muchowski. He possessed a shrewd intelligence as well as a certain impulsivity – a fellow hacker referred to it as “urgency” – that had led to a long string of civil-disobedience arrests dating back 10 years, for offenses ranging from defacing a wall with anti-war slogans to banging a drum during a “noise demo” at the 2004 Republican National Convention in New York. (He later called his brief stint in the Tombs his “best prison experience.”)

Jeremy was even busted once, in 2005, for trying to join a protest, against a group of white supremacists in Toledo, Ohio. “They hadn’t even gotten out of the car when they were arrested,” says Muchowski, a Chicago union organizer who bailed Hammond out.

His arrest, the most prominent bust to date of a U.S. hacktivist, was also a coup for the FBI (who were as ‘guilty’ as Jeremy!). Before he was locked up, Anonymous had engaged in a year-and-a-half-long hacking spree, waging a full-scale war against the “rich and powerful oppressors.” The group shut down the websites of the CIA, major banks and credit-card companies.

They took up the cause of the Arab Spring by attacking the government websites of Libya, Tunisia and Egypt; they broke into computers belonging to NATO and the GEO Group, one of the world’s largest private prison corporations. They hacked defense contractor Booz Allen Hamilton – an attack, dubbed “Military Meltdown Monday,” that yielded 90,000 military and civilian e-mail accounts and passwords. They even attacked the FBI itself.

But none of these attacks had the political resonance of Stratfor. The computer breach not only cost the company millions, but focused worldwide attention on the murky world of private intelligence after Anonymous provided the firm’s e-mails to WikiLeaks, which has been posting them ever since. It was, by any estimate, an audacious hack – and one for which Hammond may face decades in prison.

A federal judge has refused to recuse herself from the closely watched trial of jailed computer hacker Jeremy Hammond, an alleged member of the group “Anonymous” charged with hacking into the computers of the private intelligence firm Stratfor and turning over some five million emails to the whistleblowing website WikiLeaks. Hammond’s lawyers had asked Federal Judge Loretta Preska to recuse herself because her husband worked for a client of Stratfor, and himself had his email hacked.

Jeremy Hammond’s supporters say the Stratfor documents shed light on how the private intelligence firm monitors activists and spies for corporate clients. He has been held without bail or trial for more than nine months. We speak with Michael Ratner, president emeritus of the Center for Constitutional Rights, about Jeremy’s case.

Jeremy Hammond is facing charges relating to the hacking of Stratfor, the private intelligence-gathering company whose files were published by Wikileaks. The above video is a Democracy Now interview with Michael Ratner, the US lawyer representing Julian Assange, the editor-in-chief of Wikileaks. Ratner discusses Hammond’s case, including the shocking news that Hammond’s trial judge, Loretta Preska, has refused to recuse herself given that she is clearly biased.

you can support Jeremy Hammond and other incarcerated Anons by:

17 thoughts on “Save Jeremy #Hammond the Hacktivist Hero: faces life from Bent Judge”