2nd day Barcelona riots for eviction/demolition of Can Vies

For the 4th straight day Barcelona’s Sants barrio was the scene of burning barricades and police charges. The evening demo  and pot banging was entirely peaceful but later on main streets were closed as incidents multiplied.

The police were in foul mood, despite having reinforcements from Spain, extremely violent and vicious, arresting at least 21 and injuring many with their stiucks and bullets.

The local and city Councils are feeling the pressure, with accusations from all sides and growing support for the Can Vies Occupiers. Support demos continued around Catalonia and beyond. Negotiations have been proposed through intermediaries.

All eyes are focusing already on Saturday’s Day of Action when the protestors plan to ‘REBUILD CAN VIES’ or at least make a start. Many alternatiuve typoe events, iuncluding bthe Anarchist Cinema Festival have been postponed so as nbot to pull away support from the struggle. 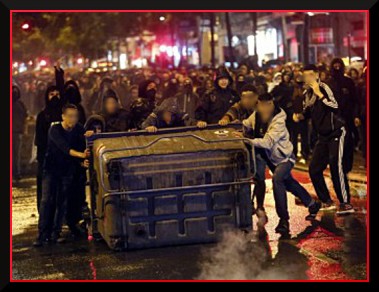 (WHAT IS CAN VIES”  Can Vies was a local self-run Occupied Social Center, going for 17 yrs in an ex union building, with wide neighbourhood support. The Coumcil  ordered an eviction for a ‘green space’ to crush an organisation outside its idea of a sanitised, top down, rich only, capitalist paradise. They were warned many times that evicting Can Vies would be the start of urbaan warfare, with 70% youth unemployment. Yet the arrogant idiots went ahead and lit that fuse…..)

MAYBE THE BEST EVER VIDEO FROM CAN VIES…the ‘lip dub’ of summer last year, gives an idea of great community revolutionary spirit they have created over 17 yearsRelated articles