In the near future you may be chosen or refused for a job without an interview, test or formal qualifications, chosen by an algorithm robot after instant analysis of your ‘digital footprint’, everything you’ve ever done that leaves a trace. Equally you could get fired because the BOT dislikes your footprint.

Asking such programs to exclude anyone who has been in a union, or ever protested about anything, or ever pressed ‘LIKE’ on anything anti the 1% or whoever holds power, will be as easy as pressing a few keys

”Some algorithms have even begun cracking the whip as people go about their work, much like the Taylorism stopwatch-holders in 20th Century factories.

The writer Mac McClelland, for example, recently described her time spent working in an online retailer’s warehouse for the magazine Mother Jones.

Each worker was given a handset that told them where to go in the warehouse to pick up an item to prepare it for delivery. McClelland told how the handset would count down how many seconds she had to reach her destination, as well as tracking her underperformance if she overran its timing. While a human boss was ultimately responsible for her line management, for most of the day, it was the machine that was in charge.”

Algorithmic bosses are also making their way into the office, at least in terms of the outsourcing of many management decisions. Many companies are beginning to use “people analytics” – historic information on an individual’s online behaviour – to analyse prospective job candidates. 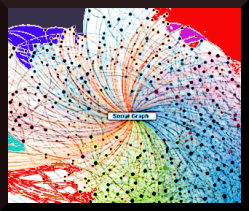 Analytics teams in human-resources departments of large corporations such as Google and General Motors, for example, use algorithms to instantly comb through the vast amounts of data collected on online interactions.

…Apart altogether from  total surveillance efforts of the ‘big brother’ US National Intelligence Agency (NSA),torrents of data are routinely collected by American companies and now sit on corporate servers, or in the cloud, awaiting analysis. The NSA accesses banking, phone and video cam data as well, but even without that most people leave behind a detailed digital report of their lives.

Bloomberg reportedly logs every keystroke of every employee, along with their comings and goings in the office. The Las Vegas casino Harrah’s tracks the smiles of the card dealers and waitstaff on the floor (its analytics team has quantified the impact of smiling on customer satisfaction).”……

”E‑mail, of course, presents an especially rich vein to be mined for insights about our productivity, our treatment of co-workers, our willingness to collaborate or lend a hand, our patterns of written language, and what those patterns reveal about our intelligence, social skills, and behavior.

As technologies that analyze language become better and cheaper, services are becoming available to run programs that automatically trawl through the e-mail traffic of their workforce, looking for phrases or communication patterns that can be statistically associated with various measures of success or failure in particular roles.”

It’s hard for us to appreciate that anyone could be bothered to track every word and detail of our emails and photos we ‘liked’  and refuse us work maybe a decade later on the basis of it, but of course for the algorithm robot it’s no bother at all.

….. Regardless of their occupation, most people leave “data exhaust” in their wake, a kind of digital aura that can reveal a lot about a potential hire. Donald Kluemper, a professor of management at the University of Illinois at Chicago, has found that professionally relevant personality traits can be judged effectively merely by scanning Facebook feeds and photos. LinkedIn, of course, captures an enormous amount of professional data and network information, across just about every profession.

A controversial start-up called Klout has made its mission the measurement and public scoring of people’s online social influence….

Google’s understanding of the promise of analytics is probably better than anybody else’s, and the company has been changing its hiring and management practices as a result of its ongoing analyses. (Brainteasers are no longer used in interviews, because they do not correlate with job success; GPA is not considered for anyone more than two years out of school, for the same reason—the list goes on.)”

Thanks to new technologies and methods of analysis that are cheaper, faster, and much-wider-ranging than what we had before, using ´science’ to  pick and control  the productivity of workers is back in favor- . A new era of technocratic control has begun.

”Consider Knack, a start-up based in Silicon Valley. Knack makes app-based video games, among them Dungeon Scrawl, a quest game requiring the player to navigate a maze and solve puzzles, and Wasabi Waiter, which involves delivering the right sushi to the right customer at an increasingly crowded happy hour. These games aren’t just for play: they’ve been designed by a team of neuroscientists, psychologists, and data scientists to suss out human potential. Play one of them for just 20 minutes, says Guy Halfteck, Knack’s founder, and you’ll generate several megabytes of data, exponentially more than what’s collected by the SAT or a personality test.

How long you hesitate before taking every action, the sequence of actions you take, how you solve problems—all of these factors and many more are logged as you play, and then are used to analyze your creativity, your persistence, your capacity to learn quickly from mistakes, your ability to prioritize, and even your social intelligence and personality. The end result, Halfteck says, is a high-resolution portrait of your psyche and intellect, and an assessment of your potential as a leader or an innovator.”

So will worried parents soon be FORCING their kids to play video games to up their ‘Knack Grades’ and taking extra classes to up their Klout!? ..ha ha ha

After the latest revelations of government and corporate mafia hacking and looting on the grand scale many people are changing their passwords and user names, or even rerouting through TOR. More and more  are adopting various popular proxy methods to become INVISIBLE on line. However for most people, me included, this is still too much work, just to use the computer occasionally.

A good idea for the future is to create a SANITIZED DIGITAL YOU, in your exact real name, with Google, Farcebook and Linked-In accounts, and continue your normal life with a strictly separate identity, if this is possible to achieve with your available time and energy. With a few friends doing the same thing you could gradually build up a Digital Footprint sure to be chosen by their stupid Bots!

partly copied from http://www.theatlantic.com/magazine/  with many thanks