All that media bullshit about US fracking boom was just hype to finance rip-off scams, soon leaving dead bankrupt wells, poisoned land and water and less and less loot for the scammers. 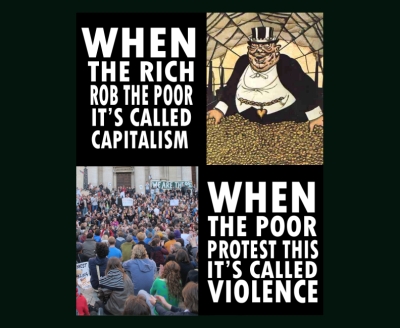 The US’s drive to become a top global oil and gas exporter by fracking has been blown wide open by a 96% write-down of California’s Monterey Shale – meant to hold two thirds of the US’s shale oil. How long before the whole enterprise is exposed as another monstrous Ponzi scheme?

The US oil industry is also due to spend $2.8 trillion by 2035 just to stay even whereas the Middle East will spend a third less, produce three times more in the same time.

“After years of talking about it, we are finally poised to control our own energy future.” 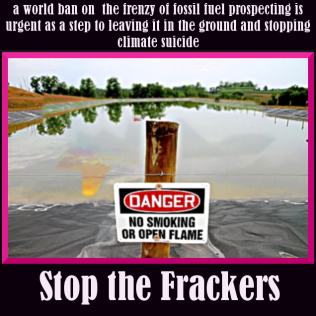 So spoke Barack Obama in his 2013 State of The Union address.

But the myth of American energy independence from fracking has been dealt a huge blow by the downgrade of recoverable oil from the Monterey Shale formation.

The US Energy Information Administration (EIA) has slashed its estimate of oil reserves from the Monterey shale formation by a massive 96%.

……..If we put industry propaganda to one side, the reality is that this downgrade represents a huge blow to the fracking industry. Not only them, but also to the capitalist politicians in Congress, who put such great hopes on oil and gas from fracking……..

Tom Whipple, a highly respected peak oil analyst, has cast doubt on the new revised figure of 600 million barrels,“which in itself may be high.”

J. David Hughes, geologist, has extensively studied the Monterey shale formation. He produced a study in 2013 which showed the EIA’s 2011 forecast was vastly overstated.

“The oil had always been a statistical fantasy. Left out of all the hoopla was the fact that the EIA’s estimate was little more than a back-of-the-envelope calculation.’ 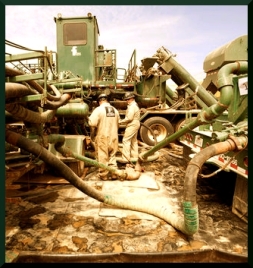 Hughes has noted the significance of the massive downgrade in recoverable oil reserves in California: “Monterey was a huge field wiped out with a stroke of a pen: That’s like two Bakkens off the table in one fell swoop.”

“You’re going to have a whole slew of poorly producing wells in a decade or so. The good news is that supply grows short term, but the bad news is that we may have a very serious supply issue 10-15 years out.”

The economics of fracking just do not add up

According to the International Energy Agency it will take 2,500 new wells a year just to sustain the Bakken shale plays output of 1 million barrels per day.

To break even US shale oil needs oil priced at $80 barrel. Meanwhile, Iraq can produce the same amount of oil from just 60 conventional oil wells at a cost of $20 per barrel.

“The US oil industry is also due to spend $2.8 trillion by 2035 just to stay even whereas the Middle East, for example, will spend a third less, produce three times more in the same time. So it can only be done with zero percent interest rates and free money.”…..

Ashley Miller, Executive Director of the Post Carbon Institute, has noted that the Monterey Shale downgrade should make

“investors more circumspect. The shale revolution is in many ways a story of cheap credit fuelling uneconomic drilling. Industry has hyped claims and relentlessly drilled (even when they were losing money) in order to keep low-interest loans and investments coming.

“If investors become more circumspect, it could put a dent in drilling rates which would put an end to the ‘shale revolution’ in short order.”

Oil and gas drilling resembles a Ponzi scheme of vast proportions. The shale drillers have to keep up the frantic pace of drilling due to the 2-3 year life span of most wells.

This massive drilling programme is based upon huge amounts of cheap debt thanks to the Fed’s policy of zero percent interest rates. This borrow drill repeat strategy is thus living on borrowed time. Any increase in interest rates would blow this Ponzi scheme industry apart.

“It’s a perfect set-up for investors to lose a lot of money … The model is unsustainable.”

Pressure to support a moratorium

This has led to growing public opposition from residents suffering a growing list of health problems, climate scientists and farmers. Californian farmers are concerned that fracking will consume a lot of water in a state plagued by the worst drought.

A recent poll commissioned by the Sierra Club and the Natural Resources Defence Council, found that 68% of Californians support a moratorium on fracking in their state.

The massive downgrade in the Monterey shale formation may well lend momentum to this opposition from ordinary people.

Across the United States there is a growing movement of opposition to fracking which makes it harder and more expensive for the oil and gas companies to continue extracting oil and gas.

Take for example the recent vote by the city of Canandaigua, New York which has voted to ban the exploration, storage and treatment of waste water within city limits. Canandaigua joins a growing list of cities, towns and villages across New York that have adopted bans and moratoriums upon fracking.

According to the latest summary by John Hoff, who has tracked fracking votes for several years, 213 New York state communities have voted for bans or moratorium upon fracking operations. Meanwhile, another 90 are considering action against fracking operations in their areas.

The massive downgrade of the Monterey shale formation confirms the analysis of geologist David Hughes that oil and gas fracking in America will not provide for the American people’s long term energy needs.

It deals a huge blow to the geopolitical ambitions of American imperialism. Most EU countries realise they are dependent on Russian gas over the longer term.

The American ruling class is addicted to short termist solutions to its energy needs. Left in the hands of corrupted politicians the American people face a nightmare future of massive pollution from oil and gas fracking.

The American people must take their destiny into their own hands and overthrow a profit-seeking, parasitic economic system that will destroy the planet if left in place.

Dylan Murphy and Jo Murphy are trade union activists involved in the struggle against fracking.

This article was originally published on CounterPunch. 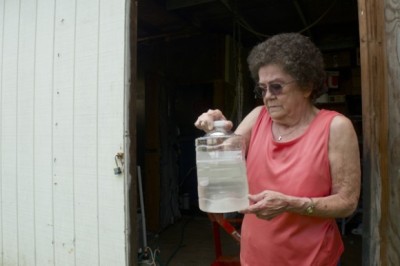 ‘’Europe faces higher economic hurdles to exploiting shale gas because geological structures are deeper and more complex, environmental legislation is stricter than in the United States, grants, subsidies, and tax breaks are not available, and the population in relevant areas is denser. Also there is no oil lobby controlling politicians and funding false reports and obtaining exemption from environmental controls.

Together, these issues mean significantly higher production costs—€25 per megawatt hour (MWh) or higher—which cannot be covered when gas prices are €20 per MWh or lower, which is the average in Spain, calculated on surveys of prices at port entry as there are no official figures.. Based on current and expected gas prices, we do not anticipate an unconventional gas revolution in Europe in the near future.’’

If this statement is true, and  more reports suggest that it is, then we would have a good chance, with a strong non-party campaign of stopping fracking in Spain, of saving the groundwater from extreme poisoning, and of sending a strong signal that, here at least, we are getting serious about saving the biosphere and averting catastrophic climate change.

Frack Gas to cost 25% more than present inflated prices. The numbers don’t add up. Despite all the hype and outright lies the fracking industry has no immediate financial future. This is why the US frackers won’t invest in LNG facilities, unless the government pays. This is why Craig Steinke was keen to pass on his fracking licenses in Realm Energy to San  Leon/Frontera and stash the $25 million cash, instead of developing them himself. Let’s see if he sells off his new licenses with R2/Montero, once he has hyped up the share prices to a ridiculous

In Spain there is still no open market for gas, prices are secret which is ideal as it makes lots of opportunity for shady dealings and corrupt practices. In the rest of Europe the `hub’ gas markets are taking over, which can be just half the price, but are much more variable. Here in Spain we are stuck with contracts linked to oil prices. Most of these Supply Contracts run until at least 2020, which is a disaster for Spain… why?….

Gas consumption collapsing. Of course, with the permanent ‘’crisis’’ gas consumption has fallen more than 10% instead of increasing as predicted. So Spain not only receives LNG cargos at a high oil-related price but gets far too much and has to resell to Europe at a big loss. Absurdly they like to lay the blame for this bad planning on ‘too many wind generators’ and have now crashed the solar market by withdrawing promised wind and solar subsidies retroactively and starting a new ‘tax on sunshine’ (2014).

World Gas prices are likely to crash in 2015, making Fracking a total  ‘no no’. So we have an artificially high price, averaging about 20 euros per MWh, and fracking gas will cost about 25 euros to produce. This begins to sound good, but there’s more. Most commenters agree that a collapse in gas prices will arrive by 2015, and this in spite of the extra imports due to decommissioning Nuclear Plants.

This predicted price fall is due to the new hub markets, as well as the huge fracking

industry taking off in China and India (unfortunately for the planet), and most importantly due to a lot of new LNG shipping facilities coming on line, especially in Australia and Quatar. Estimates of 50% overcapacity and a price crash are common.

99% of scientists agree, to avoid Climate Catastrophe two thirds of known coal/oil/gas will have to STAY IN THE GROUND. Yet there is a mad worldwide rush to find and exploit new resources We are forced to accept fracking, not to mention more and more cars, new coal mines, power stations and oil fields coming […]