I would like to begin this article by warning that it features no links to any other website, for the simple reason that the Spanish government is in the process of passing a new law that would make linking to other Spanish websites “taxable.” The law, commonly and rather misleadingly referred to as the “Google Tax,” forms part of a draft reform of Spain’s Intellectual Property Law that was hastily approved by the Spanish cabinet last Friday.

According to Spain’s Minister of Education, Culture and Sport, José Ignacio Wert, the reform will permit the reproduction of “non-significant fragments” (i.e. quoted and hyper-linked texts from other websites) without prior authorization, but it will also require the payment of “equitable compensation” for doing so. In other words, whenever a website aimed at “informing,” “educating,” or “entertaining” users links to another website, it will have to pay a fee to do so.

According to advocates of the law, its main targets are news aggregators, such as Google News (hence the law’s nickname) and the purely user-driven Meneame, which provide brief introductions and links to the latest news from across the Internet. However, due to the highly ambiguous wording of the law, there are fears that just about every kind of news-sharing website, including blogs and even social media such as Facebook and Twitter, could end up getting caught in the law’s trawl net.

To understand the main purpose of the law, one need only read what AED Chairman Luis Enrique had to say after its passage:

This is the most important step taken by the Spanish government for the protection of the press.

And there you have it, the perfect summation: “Protection of the Press.”

What the new legislation effectively seeks to achieve is enshrine into law a dual government shakedown and protection racket. If passed (and it almost certainly will), the government will have new powers to shakedown just about everybody in Spain who links to a news or entertainment-focused website, while at the same time protecting the traditional (and extremely loyal) gate-keepers of public information, the mainstream press, from the consequences of declining sales and shrinking relevance.

The “Google Law” is expected to raise roughly €80 million, all of which will go into the coffers of AEDE members. And boy, do they need the money! Unidad Editorial, the publisher of El Mundo, doubled its losses to €20.6 million in the first quarter of this year. As for Prisa, the owner of Spain’s biggest-selling newspaper El País, it lost €47.5 million in the first quarter – almost four times what it lost during the same period last year. In the last 10 years, Prisa has somehow managed to rack up total debts of over €3.2 billion.

As I reported here (oops, no link: in theory, if the law is passed, I would still have to pay the shakedown tax even for linking to an article on my own site):

The end result is that the majority of PRISA’s shares no longer belong to the founding Polanco family, but instead to banking institutions such as Santander, Caixabank and HSBC, not to mention the Spanish telecommunications behemoth Telefoníca and multibillionaire hedge fund owners such as Nicholas Berggruen.

Having sold out to the financial sector, one can’t help but wonder just how effectively El País will be able to discharge its reporting duties now that it is owned virtually lock, stock and barrel by the same banks and financiers on which it is supposed to report.

There are four main reasons why Spain’s daily newspapers – just like many newspapers around the globe – are on the verge of insolvency.

First, fewer and fewer people are buying their print editions. For example, Unidad Editorial’s total circulation is down 18% just in the last year.

Third, competition is on the rise as enterprising journalists take advantage of dramatically reduced cost barriers to launch their own Internet news sites. El Diario, Publico, infoLibre, El Confidencial, Diagonal Periodico, Voz Populí are just some examples. All of them (none of whom are members of AEDE) are chipping away at the readership of Spain’s traditional newspapers.

Fourth and perhaps most importantly, the behavior of news consumers (I know, horrible term) is radically changing. Put simply, the demographic trend is no longer the newspaper’s friend. Unlike their parents or their grandparents, the digitally-native generation feels no allegiance whatsoever to any one newspaper publication. They search out the news that most interests them, by clicking on links on news aggregators, social media, blogs, and alternative media.

It’s for that reason that the new law is so pernicious. Not only does it seek to transfer funds from the pockets of just about every information-sharing Internet user to the empty pockets of semi-solvent newspapers, it also seeks to destroy competition. As Guru Huky writes on his blog (if you’re a Spanish speaker, search for it on Google; it’s well worth a read), killing the link is equivalent to raising an enormous entrance barrier.

The link is what allows you to discover new things, new pages, new media. By silencing the Internet, some people think that they can kill the competitive threat posed by new media.

At the turn of this fledgling century, the list of countries using repressive measures to restrict Internet freedom read like a who’s who of unsavory regimes: China, Bahrain, Saudi Arabia, Bahrain, Cuba… you get the gist!

Now everybody’s at it, including a growing number of ostensibly democratic nations. Through measures such as the U.S.’s recent attack on Net Neutrality, the UK’s sweeping Internet surveillance laws, and now Spain’s “Google Tax” (with similar legislation being introduced in Germany and France), the establishment seeks to radically reconfigure the very essence of the Internet, by slowing users down, erecting barriers, and monitoring our every movement.

It is – as it always was – about three main things: money, power, and control. Warts and all, the Internet is a very powerful public utility. It has offered individuals and groups the ability for their voices to be heard and for dangerous ideas to be shared – just as the printing press did in its day. As documentary film maker and economics blogger David Malone said in an interview with Renegade Economist (Google it), bloggers and alternative news sites are the pamphleteers of this new age. And just as the Church did during the Reformation, our governments seek to shut them up.

Here in Spain, the Internet community is already fighting back. The news aggregator Meneame has announced its intention to relocate far beyond Spanish borders, as well as its decision to no longer host any links to AEDE member sites – no idle threat, considering the site provides roughly 2,000,000 clicks a month to AEDE members. 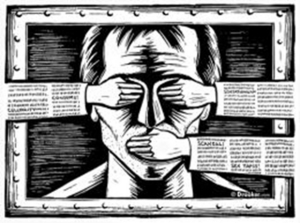 As for Google, it has threatened to close down its news service in Spain and now offers an extension on Chrome called AEDE Blocker that users can use to stop themselves from being able to access any news sites affiliated to AEDE. Bloggers are also publishing the links of unaffiliated news. If the movement continues to snowball, the Google Tax may actually achieve the exact opposite of its stated goal. Rather than protecting the mainstream press from the threat of competition, it may end up accelerating its decline. By Don Quijones. An exclusive for Wolf Street.

On an international basis, here are the secretive powers behind the trade negotiations that attempt to rewrite US and EU laws and regulations to their liking and beyond democratic controls. Near…..  Behind the Curtains: How The Corporatocracy Is Driving the US-EU Trade Agenda

By Don Quijones, freelance writer, translator in Barcelona, Spain. Raging Bull-Shit is his modest attempt to challenge the wishful thinking and scrub away the lathers of soft soap peddled by political and business leaders and their loyal mainstream media. This article is a Wolf Street exclusive.

Robots to hire, fire and boss us by our Digital Footprints

Banks sell your info to Police.. Smash a Cam kids

I AM BRADLEY MANNING video
Aaron Swartz Laid to Rest with an Action Plan For Us
In Praise of Pirates. Hurrah for Ned Snowden

One thought on “Spain takes hatchet to Internet Freedom”