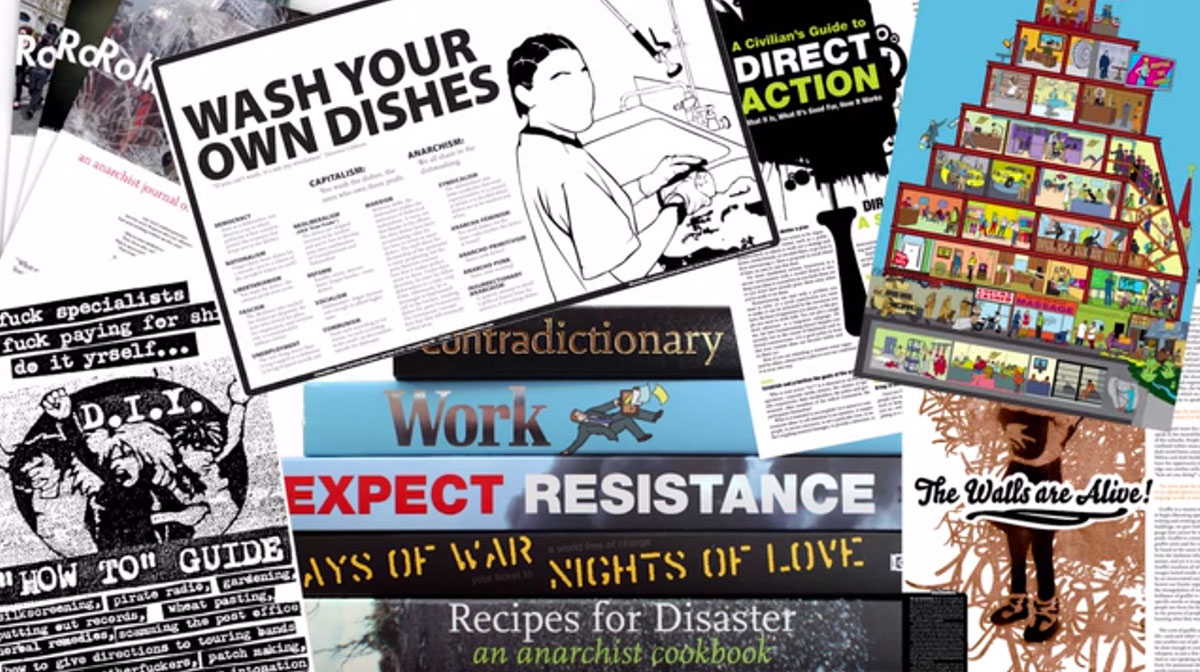 The Crimethinc collective have raised more than enough to launch ‘TO CHANGE EVERYTHING’.

without bosses, oppression, and poverty.

It’s being produced in 14 languages at the same time.

It’s a series of interactive websites being set to start on the same day.

Crimethinc are a worldwide association of anarchist activists with plenty of experience, their first handbook for revolution, Days of War,Nights of Love, came out in 2001, with millions of copies bought or free downloaded,          ( read it here  )

”Since that appeal began we’ve confirmed translations in several more languages and arranged a separate printing of the English version for the UK and Europe. Programmers from Oregon to São Paulo are coding the websites; collectives from Russia to Maharlika (the so-called Philippines) are finalizing their renderings of the video and text. Altogether, the network producing different versions of To Change Everything spans twenty groups in as many countries.

Thanks to the generous support of hundreds of donors, we will be able to:

We are still hoping to raise enough money to produce 10,000 copies of a full-color Spanish version for North America. We hope that in the remaining hours, enough last-minute donations will come in to cover this. If you’ve already donated, or you can’t afford to, please just do your part to bring this project to others’ attention. The limited edition shirts, stickers, and posters we’ve made for the fundraiser will not be available after Thursday evening.

We will be excited to put To Change Everything at your disposal, in its print, video, and web incarnations, about a month from now. Thanks to comrades like @thetinyraccoon and Mask Magazine for doing their part to support this project—and thank you.

Do You Hear the People Sing?

Released in 2000, as one of Crimethinc.’s first published books Days of War Nights of Love began Crimethinc.’s polished slick design, delivering its messages with a high contrast, organic, cut and paste style.

The chapters are organized in a fashion that don’t have to be read in sequential order to make sense, making it an attractive book to the non-reader. Topics are arranged alphabetically which places contrasting themes in the same chapter.

Days of War Nights of Love was a book that I found on a merch table at a hardcore show. I don’t remember how much I paid for it or what convinced me that I should buy it. After the last band had played as I left the hall, even before the sweat on my skin had dried I knew I had a treasure.

Flipping through the pages of my new book I found the validation and expansion of the ideas that were already bubbling in my mind. From shoplifting to dumpster diving, Crimethinc. explained anarchist perspectives on work, gender, and domestication (and so much more). Telling us that our uncompromising and unquenchable desire for freedom is the fuel for the revolution. And I ate that shit up; driving me from the comfort of aloof nihilism to an outspoken advocate for social criticism.

Days of War Nights of Love does have its problems and shouldn’t be read as the gospel. Although the book presents some radical ideas and critiques of todays mass culture it can quickly become a dangerous self affirming lifestyle package for the disenfranchised. Crimethinc.’s writings have been critiqued for being written for the ignorant middle class, but there’s more to these pages then just a manifesto for the bored suburban hooligan.

In the interest of accessibility Crimethinc has keep all of the chapters of this book available online as a PDF form free of charge. Also an anarchist collective, audio anarchy, has recorded an audio version, found with other interesting anarchist audio texts for free download on their website. ∆

One thought on “-To Change Everything- world campaign kickstarts”