The Kurdish people are a nation without a State, living in Iraq, Syria, Iran and Turkey. Resisting heavy repression in Turkey they formed the PKK, which was a strict top-down  Stalinist type guerilla movement for many years.

THEN THEIR IMPRISONED LEADER, ABDULLAH ÖCALAN, READ BOOKS BY THE US ANARCHIST MURRAY BOOKCHIN AND CHANGED HIS VIEWS, AND THE PKK EAGERLY ADAPTED THEMSELVES.

Bookchin’s ecological anarchist vision is a practical one of organizing municipal life without bosses, masters or Capitalists. Traditional anarchists mocked him for being ‘pacifist’ and not emphasizing class struggle (free download his book Society and Ecology  here  https://archive.org/details/SocietyAndEcology)

Suddenly a guerilla movement was beginning to organize in an anarchist way. As an anarchist Bookchin advocates the feminist anti-patriarchy fight which was then proposed and accepted in a nationalist, muslim movement!

When Syria collapsed into civil war the northern Kurdish area of Rojava began putting anarchism into practise in their towns and villages. They began abolishing patriarchy and private exploitation and collectivizing industry and services, for the first time since the successful short-lived Spanish Revolution in 1936.

Then the Daesh (ISIS) attacked with all their new found strength, their ideology being exactly the opposite, and almost exterminated the revolution. Anarchists and radicals from Turkey came to help but the huge ISIS army looked unstoppable. 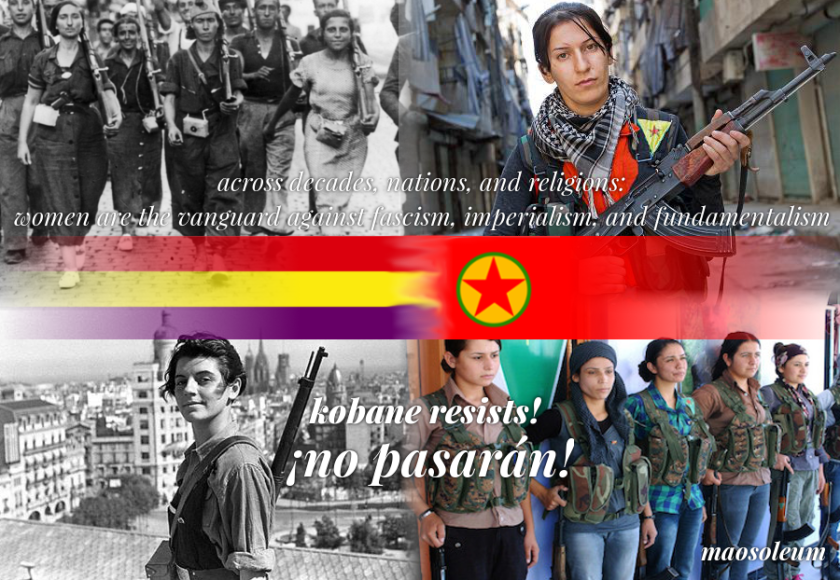 As we know ISIS was finally beaten after an epic  4 month battle in Kobani, destroying the town. Ironically US air strikes played a part in the victory. Here ISIS was more out in the open and vulnerable from the air, plus the US media had published photos of the heroic womens’ brigades of the YPG, ..Muslim women lead the fight against ISIS medieval  slavery and oppression..,

Now the hundreds of villages around Kobane are being re-occupied in a revolutionary anti-capitalist wave.

” An anarchist group active in Istanbul called Social Rebellion gave their statement of solidarity with the Rojava revolution, and they went to the region to support Kobani in the reconstruction stage acting with the United Liberation Forces “Birleşik Özgürlük Güçleri” (BOG), and with green anarchists, ecologists and communists from various countries who have declared that they act as one front.

In short interviews the comrades called for the support of anarchist revolutionaries and their contributions to be included, to the extent that they came from the hand of all the different colours of anarchist activists themselves. In addition, Social Rebellion in Kobani and Rojava announced that they will continue hereafter in the ecological guerrilla struggle.

Spanish warrior Şerwani reads a collective statement about the internationalist struggle and solidarity as an expression of the revolution:

We have established ties in the Kobani resistance, to gain victory and then continue to pursue our activities in enlarging Kobani. The United Liberation Forces have began working for the construction of communal life in Kobani, as well as defending the revolution. … Libertarian, ecologist, anti-capitalist, all the forces of their colors, bringing us together while preserving each their own self-organization in their own language, and fight against the capitalist system that is hostile to nature. Solidarity is essential and decisive in Kobani, to this end and to be in a persistent struggle to take part in the rebellion, we mobilize all our strength, we decided to go forward.

All contents of this site may be freely distributed.

PDF]Murray Bookchin: The Ecology of Freedom –