The bell tolls for Turkey and the PKK

But two deadly attacks by the PKK have recently seen the government pledge to escalate the conflict further, raising alarm before scheduled national elections on November 1.

On Sunday, 16 Turkish soldiers were killed in a roadside bomb attack – the deadliest strike yet in tit-for-tat violence that has killed 113 security officers and scores of civilians since July. That attack was followed by the death  of at least 10 police officers in an improvised explosive device attack near the small town of Igdir on Tuesday.

Riding a wave of national anger that saw attacks on Kurdish businesses and political parties this week, Turkish Prime Minister Ahmet Davutoglu announced the government’s intent to ” wipe out ” the PKK fighters.

Already, there is fighting inside many Kurdish-majority cities in Turkey’s southeast. On Sunday, Turkey’s pro-government media reported that Turkey’s military would respond to the attacks by deploying 5,000 police and military personnel to each of Turkey’s 20 most restive, pro-PKK towns and cities.

dSuch action would mean a huge escalation and could result in more violence inside urban centres. Since the advent of hostilities in June, armed members of the YDG-H, a pro-PKK youth group, have sought to control city centres, setting up armed checkpoints and digging trenches to combat police.

Turkish police forces have sought to regain control by pushing into these blockaded areas in armoured convoys, a tactic which has seen intense clashes with well-armed, pro-PKK youth fighters. 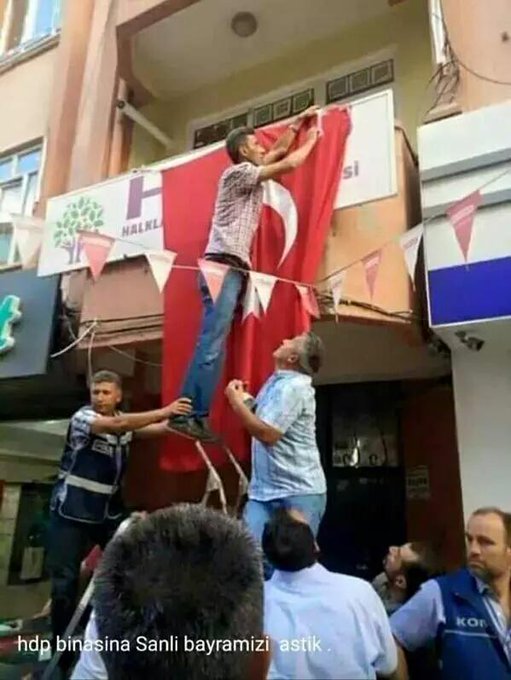 The military is fighting on a different front, pounding PKK hideouts from the air using drones to help spot targets for aerial and artillery bombardment in the Kurdish region of northern Iraq and southeast Turkey.

The introduction of military forces into urban centres would bring these two different fronts together, resulting in an escalation of violence inside Kurdish-majority cities.

Possibly foreshadowing that escalation, upwards of 5,000 security officers havedescended on the remote, embattled town of Cizre in recent days, cutting off roads and announcing a door-to-door operation against the community’s defiant street youth.

Ankara has billed the operation an effort to restore order after local politicians’ declaration of autonomy one month ago. But town residents equate the operation with a siege , pointing to the six civilian deaths reported since Saturday, including a one-month-old baby.

Violence in Cizre recalls crackdowns in the southeastern towns ofSilopi and Silvan in August. Those towns have seen renewed violence in the aftermath of police operations, with youth fighters returning to the streets, and at least three civilians and one police officer killed in attacks in both cities.

The sustained presence of security forces in Cizre might eventually stamp out violence in the town, but it could also prove a catalyst for a bloody urban insurgency that could extend to cities where a similar crackdown now looms. The step risks a widening security crisis, underscoring the needs to restore peace talks to help defuse the crisis.

In the past, the Turkish government relied heavily on the imprisoned leader of the PKK, Abdullah Ocalan, to call for calm during times of crises. But after President Recep Tayyip Erdogan announced that talks with the leader had been “frozen” in August, Ocalan has proven unwilling to make similar calls.

In the final days of August, Ankara suggested that Ocalan would makea personal appeal to Turkey’s 15 million Kurds, but later refused to release his announcement. Deputy Prime Minister Yalcin Akdogan told the Turkish press that Ocalan’s written appearance would not be proper in a time of conflict.

While the PKK’s jailed leader has not issued a call for a ceasefire, pro-Kurdish Peoples’ Democratic Party (HDP) co-chair, Selahattin Demirtas,  has sought to navigate a way out of this crisis, calling for the PKK to immediately end its hostilities.

But his call has been brushed aside  by the PKK leadership in the Kurdish region of northern Iraq, while Turkey’s pro-government press has depicted the leader as responsible for PKK aggression.

In a headline reminiscent of a wanted poster, the pro-government daily, Yeni Safak,  ran a photo of Demirtas on Tuesday, accompanied by the word “killer” in capital letters. Earlier this summer, President Erdogan called on parliament to strip select HDP members of their parliamentary immunity and try them on terrorism charges.

The Kurdish political movement has also lashed out at the government, accusing the state of ” political genocide operations ” to destroy the HDP. These tactics may help to rally votes before the election, but they may also come at an immense cost.

Just as Turkey enters a new phase of deepening, unprecedented violence, its political leaders are burning political bridges they need to end the violence.

from AL JAZEERA … WITH THANKS

Aaron Stein is a non-resident fellow with the Rafik Hariri Center for the Middle East, a doctoral fellow at the Geneva Center for Security Policy, and an associate fellow at the Royal United Services Institute in London.

Noah Blaser is an independent journalist who has been based in Istanbul since 2011. He has written on Turkish politics and culture for Newsweek Europe, Al Jazeera, Foreign Policy, and the Atlantic.

The views expressed in this article are the author’s own and do not necessarily reflect Al Jazeera’s editorial policy.

ABOUT THE AUTHOR    Aaron Stein

Aaron Stein is a non-resident fellow with the Rafik Hariri Center for the Middle East.

ABOUT THE AUTHOR    Noah Blaser

Noah Blaser is an independent journalist who has been based in Istanbul since 2011.

While ISIS preaches hate, in Rojava (Kurdistan) a feminist revolution is unfolding…

IS MASSACRES 120 IN KOBANE: TURKISH ASSIST IS TO CROSS BORDER, REFUSED HELP FOR INJURED