TAKE THE LETHAL TOYS FROM THE PSYCHOPATHIC BOYS

In Oct and Nov 2015, the US is holding, via NATO the biggest ever war games, as a complement to its nuclear provocation against Russia and China and sponsored wars around the globe. Not only do we have to pay billions for this psycopathic bullying but it makes us all targets of thermonuclear warheads.

This is an opportunity to show our resistance however we can.

These are some demonstration callouts already from the Iberian peninsula:

NATO is the USA plus all the ‘allies’ that it has strong-armed into aiding its world domination. US power may be declining, with a $59,400 billion debt (and in danger of losing the ‘great dollar hegemony scam’) but it’s still more powerful than all the rest of us combined.

This ‘rogue state’ has been at war for 222 years out of its 239 year history, building a worldwide network of  more than 1000 bases and/or military Installations and controlling dozens of ”partners” via its imposed NATO Alliance.

It’s a World War III scenario, with nuclear provocation up to the borders of Russia, and continuous spreading wars  destroying a dozen countries with millions of refugees, countless casualties and linked to climate chaos and environmental mayhem. 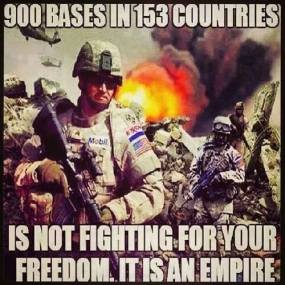 During the months of October and November 6, 2015 Trident Juncture maneuvers of NATO, mainly in Italy, Portugal and the Spanish State will take place. With the participation of more than 36,000 troops from 30 states, the maneuvers will be “the most important NATO exercise during 2015” and “the largest deployment of NATO since the” Cold War “and in the last decade, according to the Spanish Defense Ministry.

More than half of military force, 20,000 soldiers will be deployed at eight points of the Spanish State: the National Training Centers in San Gregorio (Zaragoza) and Chinchilla (Albacete), in the field of maneuvers and Tyre ‘Alvarez de Sotomayor’ (Almería),  the Amphibious Training Camp in Sierra del Retin (Cadiz) and air bases in Albacete, Son San Joan (Palma de Mallorca), Torrejon and Zaragoza. Also, there will be”super maneuvers” of theUS Marines in the Morón de la Frontera US Airbase..

The maneuvers have two distinct phases: a command post and “simulated war” (Command Post Exercise, CPX, from 3-16 October), which will take place within the headquarters of the participating states, and another real stage (Live Exercise, LIVEX, from October 21 to November 6, 2015), in which different naval, air operations, ground offensive, amphibious landings, paratroopers launches actions in urban environment, interventions in CBRN environment [nuclear, radiological, bacteriological and chemical tests] and performance of special operations forces, among others.

In the Spanish state most of the military will be deployed to San Gregorio (Zaragoza), although Andalusia also has an important role during the maneuvers. At the moment, they are already building a large camp in Zaragoza Air Base for up to 1,600 soldiers.

With these maneuvers NATO will ”implement the lessons learned in the war of occupation in Afghanistan”, and practice how to intervene militarily in northern Africa with huge invasive potential. They will rehearse how to get control of -water, minerals and hydrocarbon natural resources in a context of profound environmental degradation and energy shortages. NATO is interested in Africa due to the conflict potential of climate change and because it has a great wealth of natural resources: minerals (platinum, chromium, manganese and cobalt, among others) and hydrocarbons which represent a large proportion of global reserves.

We report also on the largest ever submarine exercise in the

Mediterranean: MANTA 2015 (DYMA 15) with ships, submarines, aircraft and personnel from nine nations. They began on September 11 and end Sept 23. Submarines from France, Greece, Italy, Spain, Turkey, the United Kingdom and the United States, under the control of NATO Submarine Command (COMSUBNATO). Why the hell are countries like Greece, Turkey, and even Spain and Italy, mired in a serious economic and social crises, spending this fortune on intimidating military maneuvers and wasting resources from social needs, to support US military blackmail?

In the African power game the Spanish state has an important role in maintaining the security of transport routes of natural resources (Red Sea and the Horn of Africa), in addition to its own military and economic interests. Therefore the vast majority of the Spanish State military missions taking place on the continent, or the Middle East. Spain is responsible for controlling the “south western border” of the European Union, to stem the migration of people fleeing poverty or war, ensuring that the effects of the policies of exploitation of the continent do not impact on European strength. The Spanish State is a spearhead of NATO in Africa.

But the NATO exercises are also designed to send a message of strength and put pressure on its neighbour Russia. In this respect the participation of Ukraine – though not yet formally a member of the alliance country – is significant. Trident Juncture not only serves not only to show Russia the ability (and willingness) of the NATO military but will also be used to train the cooperation with the Armed Forces of Ukraine.

However, the main message is not for Russia, much less for the Islamic State, Al Quaida and other, whose existence and armed actions are used as justification and propaganda war.

It is more likely that the main message is for China, a country with strong economic and strategic interests in Africa. China is investing in many African countries, building infrastructure to extract natural resources – especially minerals – from the continent. Curbing Chinese expansion in Africa from the main competitor of the member states of the Atlantic Alliance, is one of the hidden motives of these “super wargames”. All this is part of the imperialist competition between the military powers and their dependence on the commercial interests of transnational corporations.

The Trident Juncture war games protect only a privileged minority and increase global military spending at the expense of vital investment in social and humanitarian needs, such as fighting the dramatic consequences of the capitalist crisis, curbing environmental degradation, promoting fair trade, solidarity and economic cooperation for the overall development of the planet.

Only in 2014 world military expenditure was 1800 billion dollars, while in 2016 the State Spanish consume 24,489.96 million in the preparation of war and social control. Today the 5 countries with the highest military spending in Western Europe are France, UK, Germany, Italy and the Kingdom of Spain.

These “super wargames” increase insecurity in the world and make our population into a main stage of war operations. We bring the war “home”, we become direct collaborators of the violence of NATO, and therefore also a military target of NATO’s rivals, as well as encouraging terrorism, social division, racism, and fear … 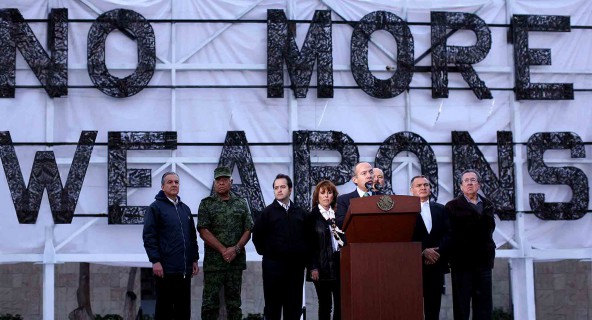 Hosting these maneuvers represent a bloody burden bloody on world progress, they are a means of irrational destruction and economic and ideological domination, and “a conquest of power”. We need to free ourselves for the good of mankind and the Earth.

Therefore, and due to its high relevance, we call for global solidarity and cooperation of societies in active nonviolence struggle for real democracy, social and environmental justice and sustainable redistribution of wealth and resources the planet. We call for civil disobedience and nonviolent direct action against Trident Juncture 2015 maneuvers of NATO.

Several groups are preparing protests and civil resistance during the development of “super waargames”  and we ask for your support and cooperation. We also invite decentralization and self-management of the protest (Organize your own disobedient action and coordinate it with others). From the pacifist and anti-militarist movement in Andalusia there are initiatives to organize civil disobedience actions in Barbate from October 30 to November 2 (opposite the Amphibious Training Camp Sierra del Retin) supported by the Alternative and Antimilitarists,MOC  and the European Antimilitarist Network. In Zaragoza we are organizing protests from 3 to 6 November (the Campo de San Gregorio will again be the protagonist of the militarist barbarism). It is urgent to show our rejection of war and the new threat of NATO.

People have the power and responsibility to stop the greed and violence and improve our fragile little world.