After Sunday’s worldwide NuitDebout demos the movement united with angry workers in a brilliant series of Strikes, Demos, Blockades, Occupations which continue to grow despite police and State Repression. 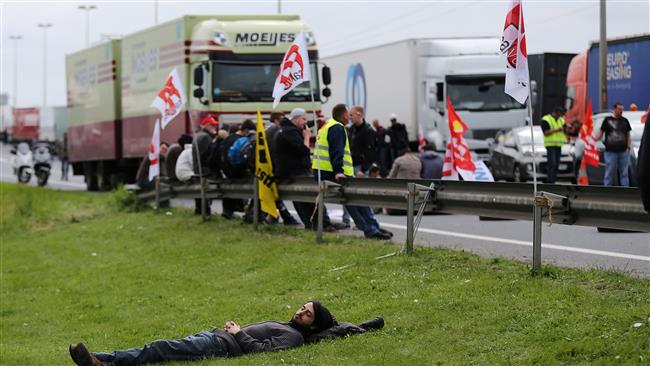 Lorry drivers have again blocked motorways in France in a wave of strikes and protests this week over a repressive neo-liberal labour law, which President François Hollande has pushed through by edict without Parliament and insists will be enacted regardless.After two months of brave protests,, the fresh action against the law, which will make it easier to hire, fire and abuse workers.

Police in Paris  invoked emergency powers but failed to prevent demonstrations against reforms to the French labor laws oin Tues 17the May , in a move whichcreated more anger among students and workers, after the Government bypassed parliament to enforce them. The Antifascist Action (AFA) and the Paris-Banlieue et du Movement interluttes indépendant (MILI) groups released details of police action to prevent a rally taking place in parts of Paris, using emergency powers invoked following the November 13, 2015 Paris attacks. -labor-riots-police–

Transport including France’s ports, trains, and airports were affected by the general strikes, notably on Tuesday and this repeats today Thursday.

Rail workers said last week that they plan to stage rolling strikes every Wednesday and Thursday from this week onward, right up until the Euro 2016 championships in July.

However, the draft law must now be debated in the Senate, the upper house of parliament.

Hollande pledged tougher repressionaction against protestors who have resisted violent attacks by riot police leading to 1,000 arrests and countless injuries.

Incredibly the murderous police held their own demos ‘against the protestors`, causing outrage and the burning of a police car by ‘terrorist troublemakers’ which then became the image repeated endlessly on  the media.

Interior Minister Bernard Cazeneuve claimed, “The security forces face extremely violent groups who are not there to express their demands but to cause trouble, to destroy and to express hatred of the state… It is intolerable and it will not be tolerated.”

Cazneuve revealed that police have arrested 1,300 people since the demonstrations began and held 819 people in custody. Fifty-one have been convicted in kangaroo courts. Cazneuve commented, “Fifty-one people were convicted, often with harsh sentences. There will be more summary trials in the courts and, I say this here in Rennes, our resolve will be total.”

In fact, the paramilitary police are well known for their violent behavior. They wear full body armour, make vicious baton

One demonstrator, a 20 year-old geography student, recently lost his eye when a police officer shot him in the eye with a flash-ball just two weeks ago. Many demonstrators are hospitalised after such police charges. Less than two years ago, another student, Remi Fraisse, was killed by a gendarme firing a “defence grenade” that hit him in a demonstration near Nantes.

When over 700 youth tried to organise a demonstration again police violence in Rennes last Saturday, the demonstration was banned under the terms of the state of emergency. The whole town was locked down, and police who had received reinforcements surrounded the demonstration and dispersed youth with tear gas and fired at them with “defensive balls.”

Before they were dispersed the youth chanted “The police mutilate, the police assassinate”. One of them showed an AFP journalist with a mark on his hip where a flash-ball had hit him and said, “They’re not trying to frighten us; they’re trying to hurt us.”

The escalating opposition to austerity across Europe has led to an explosion of class tensions and, in France, the emergence of a crisis of rule. Deeply rooted popular opposition to the PS’s destruction of basic social rights is colliding with the bourgeoisie’s determination to place the full burden of the capitalist crisis on the backs of the workers.

Since coming to power in 2012, Hollande has pushed through enormous austerity attacks, including tens of billions of euros in budget cuts, the Macron deregulation law in 2015, and now the El Khomri law, to destroy rights workers have had for decades.

Hollande is at the head of an extremely weak and reactionary government. He has survived politically until now only due to the opposition of the trade union bureaucracies which were forced to finally approve this weeks strikes.

Reports in the press and on activist web sites state that dozens of people are being pre-emptively arrested by police under the terms of the state of emergency in France as they set off to join protests against the El Khomri law. Two people in the Belleville area of Paris were stopped by police and saw in the policemen’s affairs lists of mugshots, including theirs. They were taken to the police station until the end of the demonstration.

Police have also arrested an 18-year-old and have charged him with attempted murder of a police officer during a demonstration last May 3rd. The police claim to have identified the youth from CCTV footage of the demonstration. However the youth has denied the charge.

Hollande has all but accused the protesters of collaborating with terrorism, stating that violence by demonstrators was diverting security forces from “protecting people from the terrorist threat which remains at a particularly high level.”

The main leftist unions and student groups are adamant the reform will not help redress France’s jobless rate, which has been stuck at 10 percent overall, and nearly 25 percent for young people.

Truckers had managed to block strategic points in the north and south, notably Bordeaux, stopping deliveries to a supermarket hub and fuel depots.

More marches in Paris and other French cities, especially Toulouse and Nantes, are scheduled and the less conservative CGT labour union has called for rolling strikes by dockers and airport staff.

Both of Paris’s airports – Orly and Roissy Charles de Gaulle – will be disrupted from Tuesday onwards, due to a strike by technicians, engineers and air traffic controllers.

Only two thirds of fast TGV trains were running Tuesday, with less trains at regional and local level.

report compiled from various sources.. with thanks