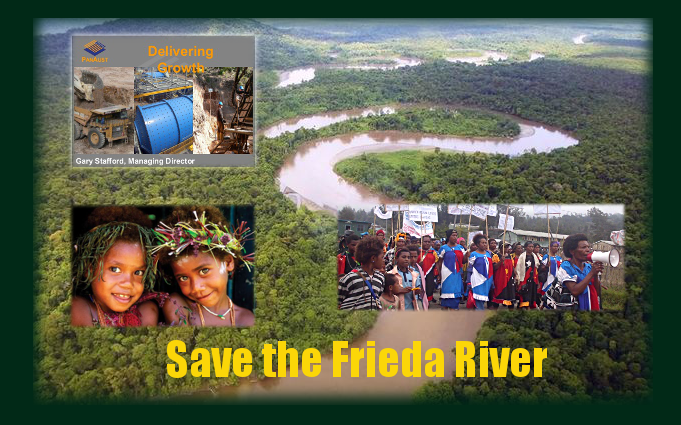 The Frieda river will be polluted, destroying the region’s rainforests and Sepik River’s swamps and staple sago trees downstream         via Earth First,

Chinese government’s massive open-pit mine in the rainy Papua New Guinea highlands, with its tons of toxic tailings full of sulphides and heavy metals, is to be poised above the Sepik River and its primary rainforests, intact local cultures, and the South Pacific Ocean.

“From a biological perspective I can hardly think of a worse place for a copper mine,” Professor Tim Flannery

A proposed large-scale copper and gold mine in PNG will irreparably harm the relatively pristine Sepik and Frieda Rivers, and devastate the region’s primary rainforests and indigenous cultures.

The Sepik is one of the largest wild river systems left in the Asia Pacific. The Frieda River runs for 100 kilometres from the mine site in the steep, forested highlands before it joins the Sepik which flows another 600 kilometres through a wetland-dotted plain before reaching PNG’s northern coast.

confrontation at the criminal Barrick Mine

Mammal fauna in that area is the richest in all of Australasia, with large tracts of contiguous primary rainforests, and the region is culturally rich as well.

Both the Bougainville and Ok Tedi mines tremendously damaged whole river systems, as did the Freeport mine in Irian Jaya.

The Bougainville mine led to a civil war that killed tens of thousands, and the mine developers Rio Tinto have now abandoned the mine without any restitution for environmental and war crimes.

The Sepik region has been heavily logged for decades, with over $USD one billion in timber extracted, leaving local peoples in abject poverty no longer able to subsist.

Industrial mining and logging by foreigners have totally failed to provide local benefits, with proceeds flowing to the urban elite, leaving ravaged industrial wastelands where primary rainforests and indigenous forest gardens once stood.

The scope of the mine continues to expand, threatening to be one of the largest copper and gold mines in the world. There are expected to be several billions of tonnes of waste rock generated in a seismically-active region with very high rainfall.

China-owned PanAust has recently applied for a special mining lease for the large-scale, openpit mine. Frieda River Copper and Gold Project is controlled by an 80:20 joint venture between Chinese-owned company PanAust and Australian Stock Exchange-listed junior Highlands Pacific.

PanAust is in turn owned by the Chinese State through Guandong Rising Asset Management – just like MCC and its faltering Ramu nickel mine in Madang, which is leaking profusely.

The company claims the mine will be of “world standard” when they haven’t yet revealed how they will manage the toxic tailings and have not submitted any environmental plan.

Once the mine is operating, 4,000 tonne barges will travel up the Sepik River daily. Chinese development in PNG is continually sub-par and shoddy, virtually ensuring major toxic spills in an earthquake prone area containing large intact natural rainforests and a complex hydrology.

The proposed Frieda/Sepik rivers mine will leave the special Sepik ecosystem an industrial wasteland. The mine poised above the Sepik must be stopped and never be built.

PanAust thinks big at Frieda
PANAUST has outlined a much larger-than-expected development for the Frieda River copper-gold project in Papua New Guinea, outlining a hefty $US3.6 billion price
May 20, 2016 | Business Advantage PNG
Frieda River ‘one of largest’ undeveloped copper-gold deposits in world, says PanAust
PanAust has released its feasibility study into the Frieda River mine in Sandaun Province, claiming it is ‘one of the largest undeveloped copper-gold deposits in the world’, with an initial 17-year mine life.
May 19, 2016 | Mining Business Media
PANAUST: STUDY BACKS $3.6B FRIEDA RIVER DEVELOPMENT
Australian international miner PanAust has completed an FS outlining preproduction capital costs of $US3.6B for initial development of a large-scale openpit mining operation at its 80%-owned Frieda River copper-gold project in PNG.

and here are the criminals

Highlands Pacific – Brisbane-based resources company with four …http://www.highlandspacific.com/  A new mining company with two projects in PNG at an advanced assessment stage and a suite of exploration tenements in PNG and Indonesia. Highlands …

Ramu nickel mine | Papua New Guinea Mine Watch    https://ramumine.wordpress.com/tag/ramu-nickel-mine/       Ramu Nickel (MCC) Management continue with their oppressive abuse of Papua New Guinea workers. It appears if you speak out – and call the Chinese out for …

Works at Harbin Hot Springs
Do not operate a pit mine here. Mine instead your dumps and landfills, discarded electronics equipment.
Like · Reply ·

I’ve been bleating to deaf ears since forever that organic agriculture to feed ourselves to self sufficiency using our customary land(without survey/title) is the only food security for generations to come.
Mining, logging and Oil Palm will leave everyone cash reliant which is what governments ultimately want since cash reliant masses become compulsorily compliant people; slaves to operate the machine to keep the global few wealthy and powerful.
Like · Reply · 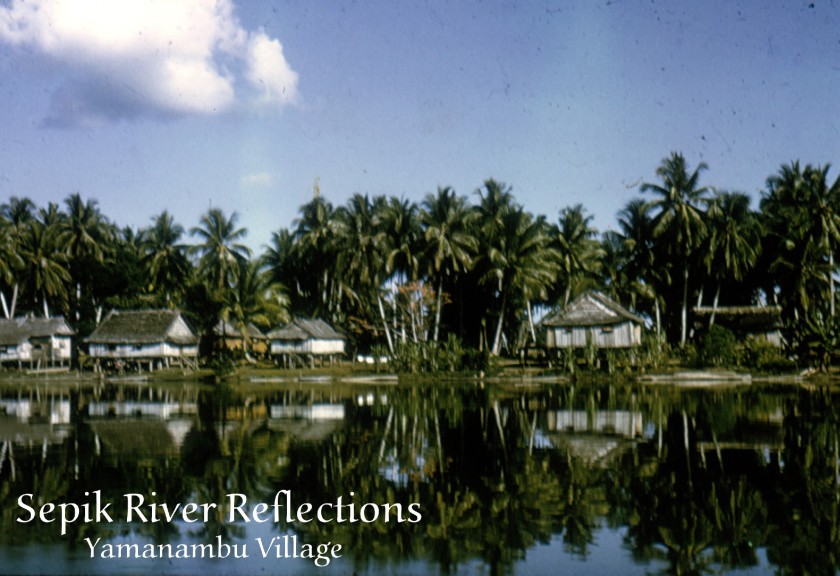 Swansea University
So very sad if this goes ahead. Hope commonsense prevails and the sanctity of the land is retained.
Like · Reply ·

Works at United Nations Mission in South Sudan (UNMISS)
We can differ at all points, but do we need to differ at protecting our Mother, the Earth? Please join hands before it is too late, let us rid the griddy of this destruction.
Like · Reply ·