The Rimaia Occupied Center and Playschool faces eviction… for the fifth time.

by thefreeonline and La Directa... Riot Police delayed the ‘surprise eviction’ after an ‘occupy spy’ revealed the eviction date and music groups held an all night Musical Marathon outside the centre.

The overnight watches continue and volunteers in Barcelona are urged to take part.

Courts uphold eviction order despite revelation of lies and false premises of speculators.

The company was secretly granted an instant eviction order saying it has a Building Works Permission and was losing money.. but it came out no such Permission has ever been requested. Thus the eviction order was given on the basis of lies.

Politicised Courts are complying with the policy of the neo-fascist Madrid central government in cancelling a Catalan law which denied eviction without rehousing in the case of speculation. The Courts have refused a request by Ada Colau the Mayor to delay the eviction (letting her off the hook). She controls the city police but the Mossos Police would carry out the Eviction Operation..

Story of a landmark social center

The Rimaia project ( pronounced ‘remaya’) was born in 2010  as a  Free University project  after the charges brought against students who opposed the Plan Bologna (to privatise and Americanise education). Its first home was in Casanova Street, and after the 1st eviction they occupied a large building in Gran Via de les Corts Catalans. Both centers were evicted, but then abandoned without any use.

In August 2010 the center in the Ronda Sant Pau, was occupied,  it is owned by a real estate developer with long disputes and conflicts with the city. The building, which was intended to accommodate families with ‘high purchasing power’ has remained completely abandoned since the day after its construction in the 90’s (except when squatted six times!). 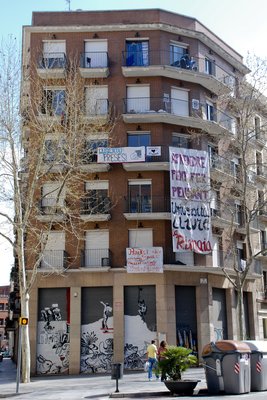 The building of Ronda de Sant Pau, was re-squatted on February 20th 2016, after a march in homage to the young anarchist activist Pablo Molano, who committed suicide a few days before.

The new Rimaia home since last spring, houses 3 families with children, a play-school space called the Rimaieta,  two groups of women migrants (Las Mujeres Pa’lante and The Dark Ones) and, more recently, the Assembly of Youth of San Antonio Barrio, among others. The leak of the imminent riot police attack forced the postponement of the eviction, but without the Eviction Order being suspended.

On the façade of the building for weeks we could see a red banner with the silhouette of a big heart and a picture of Pablo Molano, a young man who was at the epicenter of social struggles Barcelona during demonstrations against Bologna in the 15-M and in the  three general strikes of the current decade.

The Catalan government had allocated more than 600 police to evict the building. It had been evicted five times before but the owners had again left it empty.

In recent years the developers tried to open it up as an establishment destined to the tourism boom, but their intentions were restrained by the licensing moratorium decreed by the new City Council.

The all night street concert successfully, in extremis, stopped the police action. From seven in the evening on Monday there was a musical marathon of solidarity in front of the building, with the participation of groups like the Electric Dharma, Lágrimas de Sangre, and Microguagua, Boca de Baba, as well as the Borja Penalba musicians, Jordi Montañez, and the poets Sonia Moll, Aina Torres, David Cano and Carlos Rabassa…

The agenda of actions, according to the organizers, will be extended throughout the coming days and they invite supporters to spend the night to  “await together” the arrival of the police.

Meanwhile, the City Council has announced that it has requested the suspension of the eviction in the Magistrate’s Court number 31 of Barcelona. It has done so through its Residential Exclusion Unit (Ucero) to “carry out assistance to families and individuals who are currently residing in the building, especially considering that there are families with at least three children residing there, and they are in grave situation of vulnerability. ” The Courts have rejected all proposals.

The building which could be the spark of a new social conflict in Barcelona was projected as a block of houses for wealthy people. but is located in the poor Raval district and the flats were never sold, Since 1992, these flats in Ronda de Sant Pau “have only had inhabitants when they have occupied the building,”  (six times) Esteve, a member of the Assembly of Nova Rimaia, explained.

Vicente, a professor of Philosophy Institute, is one of the current tenants. He says that, in total, they are 18 people, three of whom are under age, one of these, including his son, is just one and a half-.

Vicente not only resides here, but is also part of the Rimaieta a kids space “alternative to classical nurseries inspired by the book ‘Where is my tribe?’ by Carolina Olmo. This parent group, which was formed around a midwife CAP in Les Hortes in the neighborhood of Poble Sec, has children  between “6 and 18 months.”

“When you’re a mother you feel very alone and it gives you peace of mind to trust other adults who believe in your way to educate your child and can attend when you can not do it yourself” Laura explains. “In Barcelona there is a shortage of places for smaller, kids” says Tobias. In this busy block they have found theirs.

The Assembly of Nova Rimaia, has warned that protest demonstrations will be held if the attack is finally carried out  For the moment, however, this group is concentrating on organising the cooperation of other groups to “come to the Nova Rimaia to carry out their activities,” a strategy that aims to follow in the wake of the concerts of resistance held during the Monday night which delayed the confirmed police mobilisation,

Occupy Barcelona: no Parties, no Leaders.. « The Free
thefreeonline.wordpress.com/2012/05/14/occupy-bar…

Can Vies Uprising: Building on a Total Victory