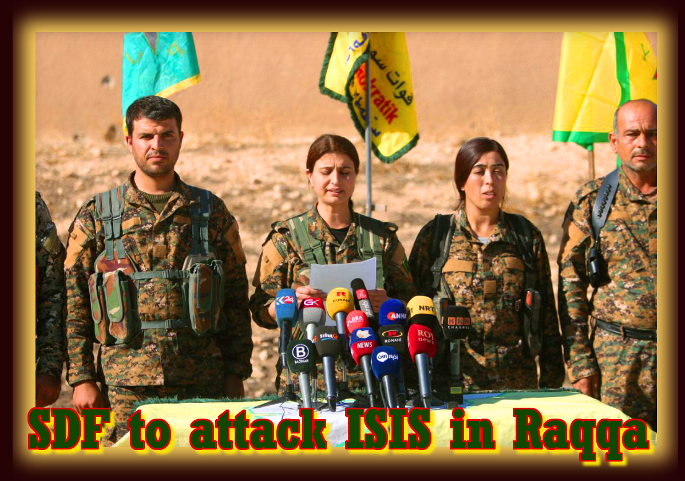 On Friday the Syrian Democratic Forces (SDF) agreed to resume the ‘Wrath of the Euphrates’ campaign against the ISIS HQ in Raqqa, departing from Tall Saman which they captured in November. Currently the forefront of the democratic forces led by the YPG / YPJ is 30 km from Ar Raqqah, capital of  fundamentalist Syria.

The Turkish invasion with their FSA jihadists mercenaries in the west of Al Bab and north of Manbij cautioned the SDF not to continue the advance on ar-Raqqah, (see SDF will halt Raqqa operation if Turkey does not stop attacking Manbij).  Hopefully they now have guarantees that Turkey will be restrained.

The SDF was set up by the Kurdish YPG/YPJ rebels as a non ethnic and non religion based Coalition. It is rapidly growing, doubling in size in 6  months as various brigades, mainly arabic, join up and undergo training, and includes western volunteer soldiers and medics, especially from anarchist milieu who support the Rojava Revolution.  (see Rojava Revolution gets support: Mass Desertions to join SDF)

The SDF is reluctantly supported by the US coalition as ‘the only force capable of confronting ISIS’. The Turkish option might only replace one jihadist group with another and could spill into a general war with the expansionist Erdogan ultra nationalists.

Raqqa – The Kurdish-led Syrian Democratic Forces (SDF) will launch the second phase of the Raqqa campaign against ISIS on Saturday and have recruited more than 1,000 fighters to join the operation.

The co-Chair of the Democratic Union Party (PYD), Salih Muslim, said on Wednesday that the first phase of the Raqqa campaign to surround the city is almost over.

“The second phase of Liberating Raqqa will be declare tomorrow in press conference,” said Massoud Masoud, a Kurdish journalist.

The PYD co-Chair said that the first stage of the operation is to besiege Raqqa and that this phase is almost finished. But going to Raqqa depends on the international coalition and international powers. “[It depends] how much they are ready to prepare such power to liberate Raqqa with the international alliance.” Muslim said.

Coalition spokesperson Air Force Col. John Dorrian on Thursday said that airstrikes are accelerating in Raqqa on ISIS fighters and resources in support of the Syrian Democratic Forces’ offensive, and 300 such strikes in the past month enabled liberation of more than 270 square miles of territory from ISIS.

The Coopfunding campaign raised 98K euros, now closed, (14 July16), but the contribute page lists various ways people for people to participate and help this cause. Also right now volunteers can`t get into as the siege is total.  see also:   Rojava Revolution Plan: Organising and Funding Projects and Volunteers

Liberating territory in northern Syria has freed up thousands of civilians from ISIS’s grip, but many remain displaced. “Many of those people are moving into Manbij,” Dorrian said, “but unfortunately, as they move in that direction, and even as they find refuge in and around the city, they’re being targeted by ISIS small arms and [improvised explosive device] attacks.”

The Kurdish-led SDF and its Arab elements established a governance in Manbij representing the local population, and it’s begun to supply services to Manbij, including opening more than 240 schools since the city’s liberation, according to Dorrian, who added that a similar system is expected for Raqqa once it is liberated.

“As the SDF isolates Raqqa, the number of SDF fighters continues to grow, as another Arab brigade joins the SDF with more than 1,000 citizens, men and women, joining to reclaim and protect their homes,” he said. 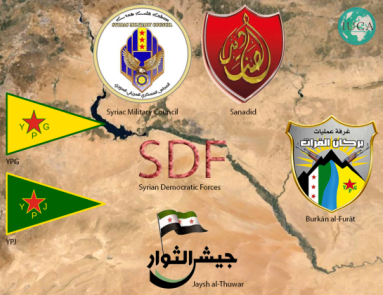 More than 1,500 new SDF fighters are being trained to participate in the Raqqa campaign and defend the forward line of troops. The majority of the new recruits are Arabs, which, according to the coalition, is critical to the liberation and to setting up governance for the city’s residents.

Roughly four weeks ago, the Kurdish-led Syrian Democratic Forces launched the Euphrates Wrath Operation, with support from the US-led coalition. The operation’s long-term objective is the isolation and elimination of the Islamic State in Raqqa. 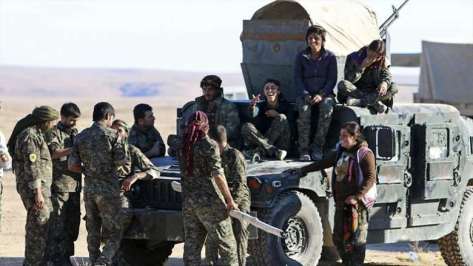 The Kurdish People’s Protection Units (YPG), Women’s Protection Units (YPJ), Syriac Military Council, Raqqa Revolutionaries Battalion and Tel Abyad Revolutionary Brigade are participating in Euphrates Wrath. In addition to these local fighters and foreign soldiers from a half-dozen nations are participating, either as YPG volunteers or under the auspices of the US-led coalition.