Moore wrote this song choosing to focus on the Irish socialist volunteers (who in later years became known as the Connolly Column) who were a small contingent within the 15th International Brigade.

Moore said: “Without Michael O’Riordan I’d never have been able to write Viva la Quince Brigada. I must have performed the song over a thousand times and every single time I sing it I think of Mick and wonder how can I ever thank him enough. In Spain in 1983 I was reading his book, Connolly Column – the story of the Irishmen who fought for the Spanish Republic, and I began this song as I read on. The song was lifted entirely from his book.”[1] 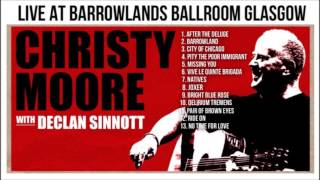 The song later appeared listed as Viva la Quince Brigada as Moore corrected the mistake in subsequent recordings. Both titles are correct however, originally there were ten brigades in the Spanish army, the five international brigades were then added to the list making the 5th International Brigade the 15th Brigade of the Spanish republic.

Ten years before I saw the light of morning
A comradeship of heroes was laid
From every corner of the world came sailing
The Fifth International Brigade.

Even the olives were bleeding
As the battle for Madrid it thundered on
Truth and love against the force of evil
Brotherhood against the fascist clan.

Chorus:
Viva la Quinta Brigada,
No Pasaran, the pledge that made them fight
Adelante was the cry around the hillside
Let us all remember them tonight.

Bob Hilliard was a Church of Ireland pastor
Form Killarney across the Pyrenees he came
From Derry came a brave young Christian Brother
And side by side they fought and died in Spain.

Tommy Woods age seventeen died in Cordoba
With Na Fianna he learned to hold his gun
From Dublin to the Villa del Rio
He fought and died beneath the Spanish sun.

Many Irishmen heard the call of Franco
Joined Hitler and Mussolini too
Propaganda from the pulpit and newspapers
Helped O’Duffy to enlist his crew.

The call came from Maynooth, “support the fascists”
The men of cloth had failed yet again
When the Bishops blessed the Blueshirts in Dun Laoghaire
As they sailed beneath the swastika to Spain.

This song is a tribute to Frank Ryan
Kit Conway and Dinny Coady too
Peter Daly, Charlie Regan and Hugh Bonnar
Though many died I can but name a few.