Skip to content
Elected by a minority the UK Tory party revel in robbing, squeezing and in this case killing the population to benefit the established ruling class. The UK is a toxic blend of institutions, parties, schools, law, work, prisons, property, police, family,  etc. which mould our minds and have always blocked all chance of revolution.. ……but OUR TIME WILL COME

http://www.ox.ac.uk/      Researchers (published by the Royal Society of Medicine) exploring why there has been a substantial increase in mortality in England and Wales in 2015 conclude that failures in the health and social care system linked to disinvestment are likely to be the main cause.

There were 30,000 excess deaths in 2015, representing the largest increase in deaths in the post-war period. The excess deaths, which included a large spike in January that year, were largely in the older population who are most dependent on health and social care.

see also.. Saving the #NHS from Trump and May

Reporting their analysis in the Journal of the Royal Society of Medicine, the researchers from the University of Oxford with London School of Hygiene & Tropical Medicine,  and Blackburn with Darwen Borough Council, tested four possible explanations for the January 2015 spike in mortality.

see also.. The impending storm which is threatening #OurNHS

After ruling out data errors, cold weather and flu as main causes for the spike, the researchers found that NHS performance data revealed clear evidence of health system failures.

Almost all targets were missed including ambulance call-out times and A&E waiting times, despite unexceptional A&E attendances compared to the same month in previous years. Staff absence rates rose and more posts remained empty as staff had not been appointed.

see also.. Britain’s richest 1% own as much as poorest 55% of population |

The researchers say that there are already worrying signs of an increase in mortality in 2016. Without urgent intervention, they say, there must be concern that this trend will continue.

Commenting on the analysis, co-author Professor Danny Dorling, from the School of Geography and the Environment at the  University of Oxford, said: ‘It may sound obvious that more elderly people will have died earlier as a result of government cut backs, but to date the number of deaths has not been estimated and the government have not admitted responsibility.’ 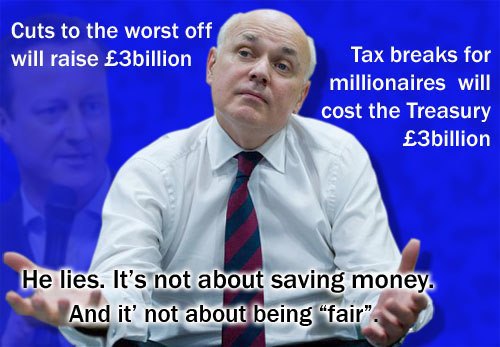 Co-author Professor Martin McKee, from the London School of Hygiene & Tropical Medicine, added: ‘The impact of cuts resulting from the imposition of austerity on the NHS has been profound. Expenditure has failed to keep pace with demand and the situation has been exacerbated by dramatic reductions in the welfare budget of £16.7 billion and in social care spending.

With an aging population, the NHS is ever more dependent on a well-functioning social care system.  The possibility that the cuts to health and social care are implicated in almost 30,000 excess deaths is one that needs further exploration. Given the relentless nature of the cuts, and potential link to rising mortality, we ask why is the search for a cause not being pursued with more urgency?’

The paper, What caused the spike in mortality in England and Wales in January 2015?, is published in the Journal of the Royal Society of Medicine.

2 thoughts on “30,000 Massacred by Tory cuts in Health and Social Care”