´Barcelona reports..  #ProuTaxesAbusives   Students set up camp, closing the main Via Laietana for 3 hours before being  brutally evicted by 300 cops at midnight… A few days later a large LGBTI demo reclaimed the night, marching round the cityand resisting all attacks.  #CridemLaNit.

by JESÚS RODRÍGUEZ  at La Directa.(summarized Translation The Free )               A contingent of 300  Catalan Riot  Police evicted more than 200 students who wanted to camp in front of the headquarters of the Secretariat for Universities in Barcelona.

They were  demand a reduction of 30% of university fees and masters degrees, some claims already approved by the Parliament of Catalonia  but  not put into practice. That’s why hundreds of demonstrators resorted yesterday Via Laietana -in the context of the second day of student mobilizations . 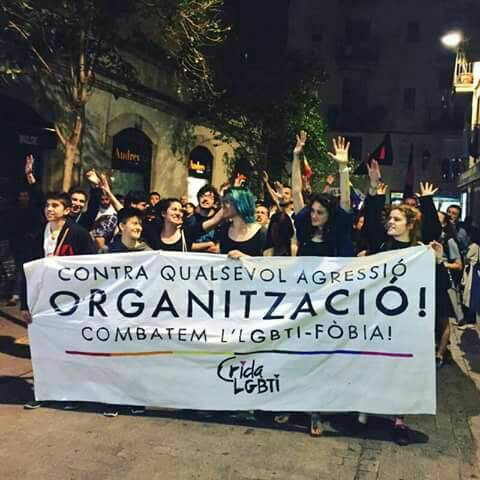 The student’s fees camp was confronted by  four whole units of the Mobile Riot Brigade -some 300 agents who were ordered out by the Minister of Interior Jordi Jané:
Hundreds of people blocked the main street for hours shouting “resistance, resistance” or “it will always be our street.

Three long hours of waiting, until midnight, when the huge police presence-some 300 agents received the order to attack the peaceful demonstrators.

One of the two Catalan police helicopters, equipped with an infrared camera in high-resolution  worth 300,000 euros was placed right above the street camp,
The riot units 3, 4, 5 and 6 were supported by the unit E-700, which recorded every step on video with dozens of cameras GoPro Hero3 Black Edition, which has cost about 70,000 euros in public funds.

The PA, gave the protesters the opportunity to flee voluntarily. Then began the eviction operation, one of the biggest in recent years, second only to the identification of 418 protesters on 23 January 2011 .

Hundreds of demonstrators were identified one by one by their ID documents and led away an undetermined number were injured, according to the balance of the organization Solidarity antirepressive Alert.

The performance was vicious and convincing, lasting 80 minutes. The agents, in pairs or four on four, lined up and received the order to take away a protester. Twisting wrists, legs tightened, in some cases with such virulence that the cops fell to earth, pinching, grabbing by the neck and putting pressure on sensitive points of the body.

Clothes were torn, with obvious bruising on the skin and moments when the tension rose. One such moment was experienced when subinspector Jordi Arasa -already convicted foraggression by the former member of the CUP David Fernandez pushed a student against the wall, with gestures of superiority and shouts.

Finally At 1.30 am a girl raised a megaphone and shouted: “We have given an example of dignity and resistance, thanks to all, we are all proud of you, here we go better now, but we do it in group, do not leave alone. “The students announced via Twitter the end of two days of demos under the banner #ProuTaxesAbusives but promising “to come back and continue the fight”