~ from  VIOLETREVA  shared with thanks

Is every feminist secretly an anarchist?

Feminism is not feminism if it is not antisexist, but also must be:

I can’t tell you how many wimmin have been turned away from anarchism — the politics of opposing all hierarchy — due to male violence, male abuse, male threats, male testerics. And that is an awful shame, because wimmin have the greatest chance for achieving anarchy.

It’s pretty simple… Forget all your preconceptions about what anarchism is. Forget malestream anarchism with its male fantasies of “let’s kill all the bad people and we will win” because that’s just naive. Men are pretty dumb, let’s be honest. They expect everything to be cleaned up after them.

And they fail at all the basics of anarchism.

Actually, anarchism belongs to wimmin first. Before there were antisemetic men (Bakunin) arguing with sons and hangers-on of capitalists (Engels and Marx), there were wimmin who embodied the best ideals of antihierarchy, distrust of the state and scammy economic systems, and distrust of male society. These wimmin were witches. They were empowered, but not with authority.

It was male society that brought capitalism and nation states, male society that brought feudalism and kingdoms and churches in the first place. Before the power grabs, there existed the possibility for political parity between men and wimmin. I’m not sure how long this period lasted or whether inequality has always existed, because male violence is a problem universal to this planet, but I digress. We are where we are because men brought us here.

Where were the wimmin when this happened? We were given the non-choice of becoming submissive wives or dead bodies. This has always been the case.

We are not edgelords.

Wimmin as a sex have demonstrated clear tendencies towards preferring nonviolence wherever possible. We may not be pacifists, of course not; we must protect and defend as necessary. But as a sex we do not worship violence. The important thing to understand about men is that they do worship violence no matter their stated political tendencies, and if they can dress up that violence in righteous trappings then they will do so.

But ask them for analysis and evidence and they will quickly reveal their personal, emotional reasons for resorting to such aggressive tactics. The thing to understand about why men worship violence is that it is a tactic that as a sex has always worked for them to gain power over others. But killing every living thing that disobeys is not the tactic of an anarchist, it is the tactic of a tankie.

The feminists, with a bit of modification, are the true revolutionaries here. The promise of a new world where everyone is free is in our hands.

But wimmin are nonviolent not because we subscribe to liberal guilt trips of “violence is always bad, guys” — which always sounds dull. Violence is not our first impulse because we know we will be the ones to clean up the mess, be it a brawl or a war, and suffer the consequences that come with the choice of violence. 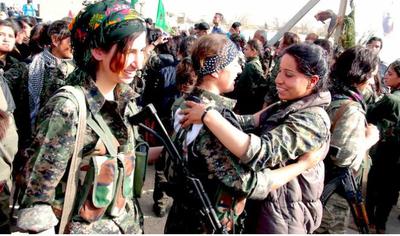 Men have always fought wars and come home or abroad to wimmin who would comfort them, take care of the children, care for the wounded, and mourn the fallen — this is what I mean when I say wimmin have been forced to clean up men’s messes. Violence is not our strength, either — throwing our weight around has not usually been something that wimmin are successful at. Often, we wimmin are the targets of violence and we are the ones who struggle to defend ourselves in the first place — from our own men.

Rather than fill all our time with fantasies of revenge, we dream of worlds that could be and in our hands there lies the possibility of a world’s creation. It is over our creative abilities that wars between men are fought.

We are tirelessly antifascist.

There is no such thing as feminazi; this is a contradiction in terms. However, there is such a thing as a nazi men’s rights activist. They’re all the rage these days. All those red pillers feminists have been debating have moved on to become full on nazis, reportedly letting go of their explicit hatred of wimmin and moving on to a passive possessive petulance of wimmin. They are quietly popping up on the dating scene hoping to snag a womon who will fall for their 1950s nuclear family dreams. Feminists don’t fall for this.

While no feminist will be battling the worst incarnations of fascist brutes on the streets any time soon, it is worth pointing out that feminists were the ones opposing gender roles and writing cutting analyses of fascist patriarchy decades ago — incisive enough to bleed Julius Evola dry of his vile theories. And, if you do your research, it is feminists who get publicly shamed by both brocialists and actual nazis.

Manarchists fail at antifascism. They can provide muscle, but they regularly equate fascists with feminists, which leaves you wondering where they will take us, if we need to fight fascism but the antifascist men are threatening to treat us the same way as fascists.

Their antifeminist actions make them the unwitting pawns of fascists, doing the work of silencing wimmin for the fascists. When a fascist takeover happens, the lefty men will have paved the way with our bodies. They fail at antifascism. QED.

Feminists on the other hand have the wit and the gynergy to produce systemic analyses of fascism as a system that arose out of patriarchy which presents a serious existential risk to feminist organizing. Feminists know that patriarchs divide up wimmin (their “property”) through the creation of racial categories. Fascism is like the boss of patriarchy going into overdrive. It does so because fascists want to use wimmin’s reproductive systems to produce their “racially pure” societies. Feminism frustrates that. Fascism is overwhelmingly male. Feminism is female.

Feminists should be concerned about fascism, and rather than beat people senseless as men are wont to do, feminists should work to create dual power with antifascist organizers. There are nonviolent ways of opposing fascism since in the end politics is a war of ideas, resting on a decision to act: violence becomes a necessity when there is no choice. Fascism spreads itself via culture, e.g. postmodernism and traditionalism, and culture is the stomping ground of feminists. Feminists must reach people and tell them what must be heard, and the analysis must be radical to the core. The diagnosis must be thorough, the truth must strike the heart.

Fascism is gaining ground because feminism is losing ground.

If it isn’t about wimmin of all cultures, nationalities, colors, religions, etc, then it’s not feminism. Feminism is international and crosses all barriers between wimmin, fostering unity across time, space, and male-drawn political lines.

Feminism does not pull punches for patriarchies of any kind.

Feminism is about promoting unity and love between wimmin all across the board.

Feminism does not abandon wimmin to the streets; it takes them in to shelter.

Feminism is anti-capitalist and anti-statist

A feminism that recognizes prostitution as slavery is essentially not only Marxist, but above and beyond that, and all feminists should be proud of that fact. Feminists recognize the coercive nature of economics for wimmin who are starving and rely on degrading work to survive. It is not a far leap to also extend this to all kinds of slavery, such as wage slavery; and even before that, feminists organized against plantation slavery.

Men talk of the proletarians, but wimmin see the work that is never paid. Wimmin recognize many kinds of work — such as household chores and tending to the family — that Marxists never did, and correctly identified these things as servitude under patriarchy. While communists were obsessing about the dollars and cents being mugged from them by capitalists, wimmin were aware that they were not being paid at all.

You could forgive feminists for being a little standoffish to Marxists. But, truth be told, feminism is better suited to communism than liberalism. What kind of feminist imagines liberation and includes in it only bourgeois (capitalist) wimmin exploiting working class wimmin? A fantasy better suited to the likes of Ayn Rand, who was at least more honest about not being a feminist.

It would be impossible for an anarchist to talk of capitalism without also mentioning the state, since it is important to understand that a state is merely the violent enforcer of the economic order. There is no such thing as a state that acts independently of capitalism. The very same people at the top of the capitalist pyramid scheme are also at the top of the state bureaucracies, and often they know one another and invite each other to dinner, which is probably cooked by their wives or served by some unfortunate waitress.

We will not end capitalism by overtaking the state; the only thing that can be done with a state is to throw it away as the shriveled organ of capital that it is.

There is no authentic feminism that could be called hierarchical feminism. Hierarchical modes of organization and other forms of domination are inimical to wimmin’s liberation, since feminism is about freedom for all wimmin. You can’t tell wimmin we are officially free and give us a list of orders for us to obey.

Our task, then, is not to join and take orders from man nor womon. Our task is to set out towards collective self-determination.

Anarcha Feminism is being Truly Anti-Authoritarian