Skip to content
by MEGHAN MURPHY  at.feminist current/                  Lesbians are getting banned from Facebook in droves for posts that include the word “dyke”  but  Facebook continues not to take action against misogyny.

In the days leading up to the annual Pride marches that took place in many North American cities, reports that lesbians were being banned from Facebook began to surface.

A mother of our movement for #LGBT civil rights: #StorméDeLaverie, our #Stonewall shero.#EqualityMarch#Pridepic.twitter.com/y010fJTrO2

Banned from FB for sharing these tweets and referring to myself as a #dyke. Today of all days. #erasurepic.twitter.com/THZWl2mghj

Co-founder of MichFest, the famed annual women’s music festival that was held every August from 1976 to 2015, Lisa Vogel, noted the irony of Facebook’s rainbow “reaction,” paired with their apparent targeting of lesbians.

Over the weekend, more and more women reported being banned — either for posting the word “dyke” in some form, or for simply posting about the bans.

I got thrown off Facebook for 24 hours for saying this. @MeghanEMurphy

While it initially appeared as though a group of people may have been targeting lesbians via the reporting tool, searching Facebook for posts including the word “dyke” to report them en masse, women have been banned after posting on their non-public profiles as well. One woman, Deidre Pearson, explains that despite having only a few hundred friends, a private profile, and posting at 2 a.m., she was banned for complaining about the ban.

I made my post at like 2am, friends only, I have a few hundred friends and my profile is private. I do not believe I was reported even once. pic.twitter.com/D7MXr3MUCA 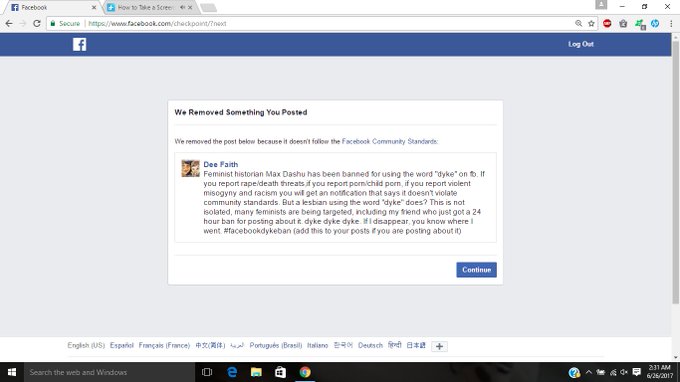 So, while the rash of bans over the weekend appeared to be targeted and connected to Pride, it’s not a new phenomenon. At Slate, Trish Bendix reportedthat Facebook removed a popular New York-based group called “Dyke Bar Takeover,” claiming the use of dyke in their name constituted “hate speech.” Even the term “lesbian” itself is not permitted on Facebook, as part of a username. Lisa A. Mallett and Liz Waterhouse report that posts arguing that lesbians are female have been removed by Facebook, as well.

The great irony in all of this is that Facebook refuses to take action against groups and individuals who post and share pornography or who engage in hate speech against feminists. I have personally reported dozens upon dozens of threats and hate speech directed at myself, other women, and posted on the Feminist CurrentFacebook page. The posts reported have included words like “cunt,” “whore,” and “bitch.” Many have paired the anti-feminist slur, “TERF,” with death threats. Not a single one of these incidents has ever qualified for any form of action, according to Facebook. Not once has Facebook removed the post in question or banned the user.

A small sample of posts that have not “gone against one of [Facebook’s] Community Standards”:

When asked about this lack of action on misogyny and male violence on their platform, Facebook will often claim dealing with the amount of flagged content is too challenging to get it right — employees must make decisions so quickly that errors are common. The company has also told users that reporting posts is the only way to deal with abusive content, that “every single report of abuse is read and acted upon by a human being,” and that Facebook does not scan for and remove content.

Yet they managed to ban dozens of female users within a matter of days — most of whom are not public figures, do not necessarily have enormous followings, who clearly aren’t being reported through nefarious means, but are in fact being sought out by the company itself.

While indeed the task of dealing with abusive content on Facebook would be an incredible challenge, the company appears to have made a conscious choice not to flag misogynist words, and to target feminist speech instead.

If Facebook has the time and means to seek out and ban lesbians who have not even been reported by other users, surely the company can deal with the misogynists who attack, slur, threaten, and abuse women on the site.

2 thoughts on “Why is Facebook Banning Lesbians for Using the word ‘dyke’?”