‘We are witnessing an astonishing new level of human depravity in which the US sells $110,000,000,000 worth of arms to the terrorist  Saudi state while actively aiding it in bombing and starving it’s neighbours to death.
Next day we read of a massive cholera epidemic but no one makes the connection. The Yemeni genocide is an object lesson, with the proof open to any blogger in the internet, of the capitalist insanity whereby just a few  days of arms spending could save the infinite suffering of poverty and lack of health services on the planet’… continues…HERE.. Depraved USA and UK green light Genocide of Millions for Profit in Yemen

Massive Cholera Outbreak In Yemen      There is a state of emergency in Yemen‘s capital after a recent outbreak of cholera.

By Niles Niemuth in the USA:     According to the latest figures from the World Health Organization (WHO), more than 1,500 Yemenis have died in a deadly cholera epidemic which has infected some 250,000 people since April. Children account for a quarter of the deaths and half of all infections.

The deadly outbreak is the direct result of the criminal Saudi-led, US-backed war to reinstate the puppet government of President Abdrabbuh Mansur Hadi, who was ousted in 2015 … 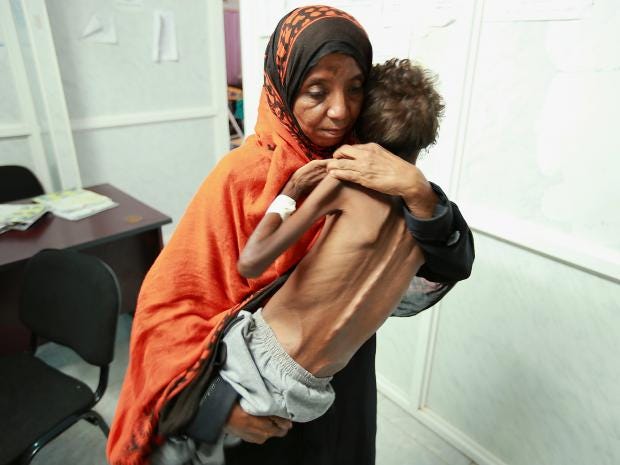 The Saudi-led assault on Yemen is a war crime of immense proportions, rivaling the US proxy war for regime change in Syria that has killed or displaced millions and the 2003 invasion and occupation of Iraq, which resulted in the deaths of more than a million people.

The war has been justified by Saudi Arabia with unsubstantiated accusations that the Houthis are being supported and financed by Iran. First under former president Barack Obama and now under President Donald Trump, the effort to dominate Yemen, which borders the key oil transit point of the Bab el Mandeb strait, is a major component of the effort to block Iran’s development as a regional power capable of impeding the predations of American imperialism in the Middle East.

Supplied with bombs and missiles, aerial refueling and vital logistical and intelligence support from the US government, Saudi Arabia and its allies have deliberately and ruthlessly carried out air strikes on food markets, schools, residential neighborhoods, hospitals and other critical infrastructure. Washington has supplied cluster bombs, illegal under international law, which have been used repeatedly.

The UN estimates that more than 16,000 people have been killed by airstrikes and ground fighting; nearly two-thirds of the fatalities have been civilians. As many as 17 million Yemenis, out of a pre-war population of 27 million, are in need of food aid, and of these 7 million are on the brink of dying from famine. Every hour, six children under the age of five die of preventable causes including starvation and malnourishment. More than three million Yemenis have been displaced from their homes.

A crippling naval blockade of the country by the US has been key to the unrelenting onslaught and has resulted in a complete breakdown in Yemen’s physical and social infrastructure, creating the conditions for the outbreak of a cholera epidemic and its rapid spread through the population.

Medical staff, sanitation workers and other civil servants have gone unpaid for months. Basic necessities, including electricity and clean water for drinking and bathing, have become luxuries. In the blockaded port city of Hudaydah, which has been without electricity for two years, residents have resorted to digging wells in the streets after the main water supplier ran out of the diesel fuel necessary to pump water to residents.

Garbage has piled up in the streets of the capital city, Sanaa, creating a breeding ground for disease. The current cholera outbreak, which began in October 2016 before temporarily subsiding, resurged earlier this year after the sewers in Sanaa became blocked and stopped functioning.

Simultaneously with the unrelenting war against the Houthis, the Trump administration has ramped up the pace of the undeclared war begun by Obama in 2009, targeting militants purportedly aligned with Al Qaedain the Arabian Peninsula for death with Hellfire missiles fired from remotely operated drones. More than a thousand Yemenis have been killed in eight years, including more than 200 civilians, among them children and pregnant women.

There have been at least 90 US drone strikes in Yemen since January, with as many as 120 people reported killed; at least one-third of the fatalities have been civilians. Fifty drone strikes were carried out in March, dwarfing any of the monthly totals during Obama’s tenure. … 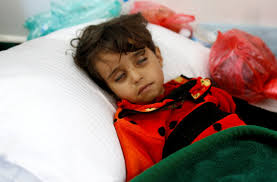 As part of the war against AQAP US special forces troops have also operated at will in the country, carrying out a raid a January in which they killed as many as 30 civilians, including 8-year-old Nawar al-Awlaki, a US citizen. Nawar was the daughter of Anwar al-Awlaki, an American citizen in Yemen who was targeted for death by Obama and assassinated with a drone strike in 2011.

Reports surfaced last month revealing that the US and the United Arab Emirates are collaborating in the operation of a network of torture chambers in Yemen into which hundreds of men and boys … have been swept up and brutally abused. Victims report being crammed into shipping containers smeared with human feces, blindfolded for weeks at a time, beaten with wires, sexually assaulted, and tied to a spit and spun in a circle of fire.

The torture regime, which began under Obama, also reportedly involves the use of interrogations by American “experts” on ships just off the coast of Yemen.

While the undeniable humanitarian crisis ravaging Yemen grows worse by the day, it has been met with a criminal silence in the mainstream media and among the pseudo-left press.

Predictably, those who demand the overthrow of Assad and Russian President Vladimir Putin, ultimately for standing in the way of the interests of American imperialism, have nothing to say about the monstrous crimes of Obama, Trump and King Salman of Saudi Arabia in Yemen. The tear ducts of the humanitarians at the New York Times, Washington Post and their pseudo-left adjuncts, which gushed over the Russian assault on Aleppo in Syria last year, have run dry when it comes to the millions of imperialism’s Yemeni victims.

‘The Houthi/Ansarullah has been vilified for the aggressive ‘Death to America’ slogans of the tribesmen. If I had to watch my children die of cholera in my bombed out house, slowly in their vomit and diarrhoea with no running water, drainage or health facilities and then catching the disease myself, I would surely join in their stupid chorus…’Death to America’.

Below we include some recent reports which, of course, hardly made it beyond this marginal media.

Despite a warning from the UN to end its existing blockades of Yemeni ports, a Saudi-led coalition is planning another major assault on the nation’s largest port city of Al Hudaydah, a move that threatens to worsen Yemen’s already unprecedented humanitarian crisis…..
continues .  HERE.. Depraved USA and UK green light Genocide of Millions for Profit in Yemen

The latest ‘wizard wheeze’ (after 2 years bombing the cities to rubble has failed) is to starve the Yemenis of the majority Ansarullah movement into submission. An unimportant detail is that at least 10 million citizens on both sides will also starve or die slowly from thirst and disease. The first step was to close down the Central Bank (CBY) by moving it from Sanaa to Aden.

The bank had intelligently kept Yemen going by using its reserves and know-how to pay public employees and minimal poverty benefits on all sides , as well as by supplying credit for importing nearly 100% of food and by subsidising fuel and basics. The excuse was that public salaries were paid more, naturally, to the majority Houthi/Ansarullah held areas.

The sabotage of the bank, which left millions of public employees and the extreme poor with no income, was done with permission and in close collaboration with the World Bank and the ‘Quad Group’, US, Saudi, UAE and UK governments ( www.irispdf), as a continuation from an earlier funds blockade and with full knowledge of the genocidal consequences….