Skip to content
from   Katja Lihtenvalner at Al Jazeera   shared with thanks   Athens, Greece – ………A cloud of tension hovered inside an Athens courtroom as an anxious crowd waited to hear the appeal verdict in the case of 34-year-old Tasos Theofilou, an anarcho-communist and novelist who has been in prison since 2012.

Several police officers suited in riot gear entered the room, while lead judge Ourania Papadaki warned the 200 solidarity activists and supporters who were present to remain calm in advance of Friday’s verdict.

“We find the defendant innocent of all charges,” Papadaki said, prompting tears of joy throughout the crowd.

His supporters chanted in unison: “The passion for freedom is more powerful than any prison cell.”

Three of the five judges ruled in Theofilou’s favour, while the other two voted to uphold his guilty verdict.

In February 2014, Theofilou was first sentenced to 25 years in prison after being found guilty of robbing a bank and killing a taxi driver on the Greek island of Paros in August 2012.

For half a decade, he rejected the charges against him, and many Greek activists considered him a political prisoner due to his involvement in the anarchist movement.

Disbelief was sketched across the faces of Theofilou’s parents, who were sitting in the front row.

“It’s impossible to believe it,” his mother said, smiling and visibly relieved as she hugged a handful of her son’s supporters.

Speaking to Al Jazeera in his Athens office before the hearing, Kostas Papadakis, one of three lawyers on Theofilou’s defence team, argued that his client’s case was politicised from the outset. He said Theofilou’s imprisonment was meant to “send a message to the [anarchist] movement”.

Greece’s anarchist movement enjoys a long history that can be traced back to the mid-19th century. Throughout the 20th century, anarchists played noteworthy roles in political upheaval, including fighting the WWII-era Nazi puppet regime (1941-44) and helping to topple the Greek military government (1967-74). 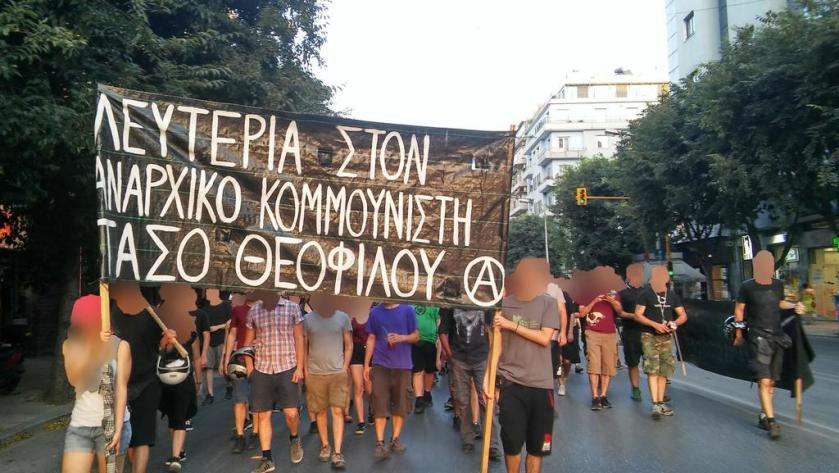 On a warm morning in August 2012, three men dressed in what witnesses described as unusual clothing – one of them in a cowboy hat and a fake moustache – entered a local Alpha Bank on Paros island. Armed with a pistol, they robbed the bank and made their getaway.

When a taxi driver attempted to intervene, he was shot and killed. The assailants disappeared.

A few days later, Theofilou was arrested in downtown Athens by several masked officers from Greece’s Special Anti-Terrorist Unit. He was subsequently charged with murder, attempted murder, robbery and membership in the Conspiracy of Cells of Fire (CCF), a banned anarchist group accused of bomb attacks and shootings.

He was later found guilty of felony charges for participation in the robbery and abetting manslaughter as well as a handful of misdemeanour charges.

During the appeal process, prosecutor Anna Kalouta described Theofilou as a violent ideologue, often referencing his taste in literature and political beliefs, saying he possessed “murderous intent and special coldness”.

Although several witnesses were present during the robbery and killing, none of them were able to place Theofilou at the scene of the crime.

The conviction was based largely on DNA evidence obtained from the cowboy hat and an anonymous phone call identifying him as a culprit.

His lawyers argued that the bank was never sealed off as a crime scene and was accessible to witnesses and others who provided the police with statements.

Theofilou and his supporters maintained he was targeted by Greek security forces for his political beliefs and his acquaintances, including his friendship with Kostas Sakkas, who was arrested in December 2010 and charged with membership in the CCF.

Critics say accusations of CCF membership are used loosely to target political dissidents with no affiliation to the group.

Activists have also rallied around Irianna, a 29-year-old PhD student whose last name has been withheld in local media, after she was accused of membership in the CCF and dealt a slew of charges.

Last month, she was sentenced to 13 years in prison after the court found her guilty of weapons possession charges. The conviction relied on DNA evidence obtained from an arms cache seized at a local university.

“We are optimistic,” he said.

“I would also like to condemn work of local media characterising Theofilou as ‘killer, bank robber, and terrorist’ after his arrest in 2012,” Papadakis said.

Throughout the initial trial that led to his conviction, Greek media outlets relied heavily on information provided by state security sources.

Noting the scarce media interest in Theofilou’s appeal case, he added: “I am honestly wondering if they will report about his exoneration today as they are obliged to.”

Ionnas Kontos, an Athens-based journalist, said the Greek media played a “very dirty role” in stoking a public perception of Theofilous as “one of the worst criminals around”.

Theofilou’s case is not an isolated one, however, and other anarchists and anti-authoritarian leftists have found themselves in the Greek government’s crosshairs, Kontos told Al Jazeera.

Comparing Theofilou’s case to well-documented violence perpetrated by the neo-fascist Golden Dawn party, such as the murder of anti-fascist rapper Pavlos Fyssas by a Golden Dawn member in September 2013, Kontos charged the media and politicians with “hypocrisy”.

“They hesitate to use the term ‘terrorism’ when it comes to neo-Nazi or ultra-right-wing violence,” he said. “It’s almost exclusively reserved for anarchists, anarchist groups or organisations and [their] actions.”

Friday’s verdict comes at a time when anarchists say they are under increasing pressure from the Greek government, which has been led by the left-wing Syriza party since January 2015.

Among the measures taken by Greek authorities is the rapid uptick in eviction orders for squats across Athens, many of which house refugees and migrants and are administered by anarchists and other leftists.

In January, well-known anarchist Panagiota Roupa was arrested again and charged with theft, forgery and membership of a “terrorist” group.

She is accused of being a leader in Revolutionary Struggle, an armed organisation the government says has carried out a string of shootings and bombings, including firing an anti-tank missile at the US embassy in 2007.

In July 2016, dozens of anarchists were arrested in the northern coastal city of Thessaloniki for interrupting a mass at a Greek Orthodox church.

Kyriakos Mitsotakis, the leader of Greece’s New Democracy opposition party, has vowed a more sustained crackdown in Exarchia, an anarchist stronghold, if he comes to power.

“A new generation of terrorists is being bred in Exarchia. Heavy weapons are being circulated and police are not taking action because there is no political will,” he told the local Alpha TV in January, promising to “clean up” the “terrorist-infested” neighbourhood.

Seraphim Seferiades, a politics professor at Panteion University, argued that the Syriza party has increasingly attempted to pursue a “law-and-order” policy of appeasing right-wing critics who accuse it of being soft on the anarchist movement by focusing on increased “policing and coercion”.

“This is a failed strategy because it will inevitably lead to more anarchist disruptive direct actions without winning over [critics on the right],” Seferiades said.

Theofilou’s case had sparked a broad solidarity movement that has held direct actions and protests on his behalf. On June 24, more than 2,000 people marched in central Athens and called for his release. Others also held a number of direct actions outside Alpha Bank locations in the capital.

In the courtroom on Friday, Theofilou stood up and joyfully raised his shackled hands as the verdict was announced. Armed police officers escorted him back to the prison to collect his belongings before releasing him that afternoon.

Although Theofilou denounced the charges as trumped up time and again throughout his imprisonment, he also refused to describe himself as “innocent”.

“I have committed a crime bigger than all of the others combined. I am an anarchist,” he said during one of the hearings.

“I am not innocent. In a class war, I chose the side of the underprivileged, the oppressed, the excluded, the haunted, the guilty and the damned ones.”