COLOMBIA: THE MASSACRE OF SOCIAL LEADERS AND THE WESTERN MEDIA SILENCE

The number of social and human rights defenders killed in the last 14 months now stands at at least 120, according to a Friday press release from the Defense of the People.The murders of social leaders continues in the face of the inaction of the authorities, who insist on denying the systematicity of the death squads campaign.

In the last days three more social leaders were murdered, while the Western Media Mafia and the UN continue silencing such crimes, implying their legitimacy and support for the neo-fascist terrorism of the oligarchy..

“The retreat of the FARC from the zones where they previously exercised control has allowed for the entrance of new armed actors who fight for territorial and economic dominance,” states the report referring to the US armed far-right terrorists who infest the country. This marks a concerning trend requiring immediate action since the attacks are “pertaining to groups with similar characteristics, and which occurred in the same period and geographic area,” it adds.

Plan Colombia was a counternarcotics and counterinsurgency military aid package launched in 2000 by then U.S. President Bill Clinton to put down leftwing resistance to the oligarchy, the ‘Mafia of the Rich’  who have long plagued Colombia, and indeed Latin America, …

Plan Colombia Has Been a Nightmare for Women  Six women were raped every hour in Colombia during the first nine years of Plan Colombia. That figure was taken from a joint survey done by women’s rights organizations, which include Oxfam and other Colombian based groups. The study revealed that some 489,678 women were victims of some type of sexual violence, while 7,752 had been forced into prostitution between 2000-2009—what were integral years for the controversial deal.

As one example, Colombian Indigenous and campesino leader Alicia Lopez Guisao was killed in Medellin , adding to the growing list of recently murdered human rights activists in the South American country. So what was her ‘crime’?  Alicia was a  leader of Colombia’s Asokinchas community and helped distribute food to Indigenous and Afro-descendant communities.

Guisao, who was shopping at a grocery store at 8:45 am local time, was shot repeatedly by two unknown gunmen who entered the store, El Tiempo reports.

The People’s Congress, the left-wing organization that Guisao worked for organizing Indigenous peasants, believes the gunmen may have been connected to right-wing paramilitary groups.

“Her murder is an example of the fact that the right-wing organizations that operate today in the city of Medellin are the same paramilitaries who have murdered others in recent years.”

Colombian Govt Accused of Inaction in the face of Violence Toward Afro-Colombians, Indigenous and Human Rights Groups

Speaking before the Inter-American Commission on Human Rights, IACHR, on Wednesday, Colombian human rights groups denounced the government of Juan Manuel Santos for inaction and silence as Afro-Colombian social activists and leaders continue to be murdered in the midst of the ongoing peace process.

“Since the signing of the peace agreement in November, over 200 murders of social leaders have been reported, many among them Afro-Colombian, even though the protection of such leaders is a component of the peace agreement,” Conpa Charo, the head of the human rights group Proceso de Comunidades Negras, PCN, said. 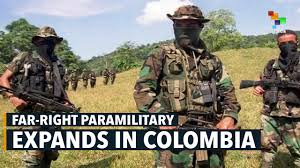 The PCN, along with the Racial Discrimination Observatory and the Center for Law, Justice, and Society Studies, issued the complaint before the 163rd session of the IACHR being held in Lima, Peru this week.

The groups urged the state to expedite the process of passing laws to protect social leaders that are already included in the peace agreements.

Charo said that although as part of the peace agreement between the Revolutionary Armed Forces of Colombia and the Colombian government it was established that the government must develop mechanisms to guarantee protection to former FARC members and social activists, the measures have for the most part not been taken yet.

RELATED:
Next Steps in FARC’s Transition into Colombian Political Life

During the hearing, ongoing violence against Indigenous communities was also presented and the “violence perpetrated by the Colombian State against the people of Buenaventura” during the 22-day strike in May.

FARC formally handed over all of their weapons to the United Nations in June, officially ending the conflict, however throughout the demobilization process violence has even increased in some areas due to the ongoing presence of paramilitary terrorists.

The government has previously been criticized for acting too slowly to implement protections, and for failing to acknowledge their presence.

An activist lights a candle for Erley Monroy, a social leader murdered in November 2016

Another activist was killed in Colombia in an ongoing wave of violence against defenders of human rights and the environment despite a landmark peace agreement that has promised to end more than 50 years of civil war.

The body of Luz Herminia Olarte, a social leader who worked in the town of Llano de Ochalí in Yarumal, Antioquia, was found after she was reportedly taken from her home Tuesday Feb. 7. The Colombian human rights organization, ‘The Social Process of Guarantees for the Work of Human Rights Defenders’, has spoken out against the murder and demanded government action.

“A society that allows the assassination of its leaders will be condemned to the social deterioration that leads to despotism, barbarism and the continued cyclical phenomenom that does not allow it to overcome their own conflicts and reach peace,” the organization said in a statement posted to Twitter.

The body of Olarte, who was part of her local community action board, was found in a pit buried between bushes and branches, according to the organization.

Nineteen social leaders have been murdered in Colombia since the start of 2017. Five of these leaders were from Antioquia, a department in northwestern Colombia.

The Inter-American Commission on Human Rights warned last November that the increase in killings of human rights defenders in Colombia is “alarming” and also noted that many activists face reprisals, harassment and threats.

IACHR, an independent organ of the Organization of American States, also reported that at least 50 human rights defenders were killed in Colombia in 2016 alone.