A day of partying, resistance and PRIDE!

On the 10th September a group calling itself ‘Gays against Sharia’ is coming to Bristol to try to spread their Islamophobic and racist agenda. This is a blatant attempt by the far-right to tokenise LGBTQIA+ communities and use us for their own ends. 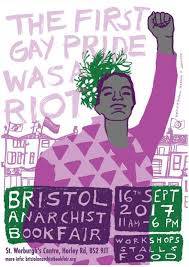 This has been tried before in Bristol: in 2012, the EDL marched on the same day as Pride. While their PR insisted they weren’t homophobic, their violent attacks on gay men on the day told another story.[0]

Let’s not be fooled by their latest clumsy attempt to wrap fascism in a rainbow flag.

We will not be used to spread oppression that would inevitably turn straight back on us. History shows that wherever these bigots gain momentum by scapegoating one group (Muslims and migrants today, Jews in the 30s) they target us soon after.

So we are planning to stop them with a large, spectacular and fabulous carnival – dust off your heels, shine up your boots and join us!

Cops and far-right thugs can be unpredictable, so to keep each other as safe as we can, it’s recommended to come with friends and stick together.

This event is queer-led but anyone who wants to stop fascism, racism and homophobia is very welcome.

So who are ‘Gays against Sharia’?

On their last outing (Manchester, June 2017) they yelled racist and homophobic abuse and attacked people. A homeless man was hospitalised while protecting a mum and young daughter from them.[1] Sikh volunteers giving away food were threatened and ‘had to scarper for our own safety’.[2]

All the key figures are far-right and most have no genuine interest in queer communities:

‘Tommy English‘ (Tommy Cook): used to be the (mostly one-man) ‘LGBT division’ of the EDL.

Jack Buckby: ex-BNP who stood as a candidate MP in Jo Cox’s area after she was murdered by the far-right.

Ann Marie Waters: so toxic that even UKIP deselected her as a candidate. Writes for Breitbart.