late news: Early results predict at least 80% want Independence which will be declared unilaterally as promised. At least 2 million may have voted despite everything. General Strike called for Tues.

late news: A platform which includes the majority ‘socialist’ UGT and ‘communist’ CCOO trade unions plus the ANC and Omnium have now backed the  General Strike Tuesday 3rd, called by the anarchist CGT.  see also: Anarchists call for general Strike 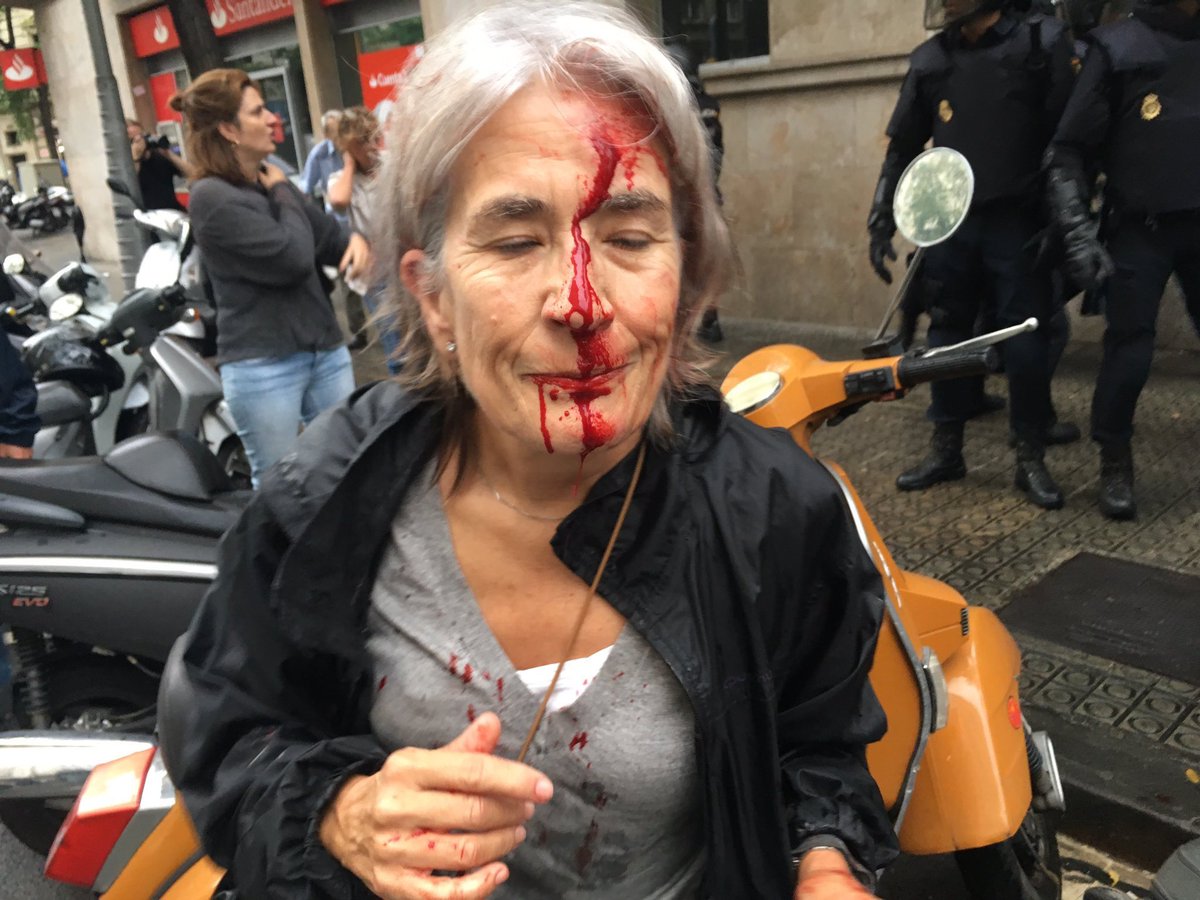 80 vanloads of  Franco’s paramilitary Guardia Civil  emerged from their HQ in the docks and charged against  a total of 93 polling stations by 5.00pm according to their own figures,( but there are 2315 stations ) ´.

The Spanish police had injured over 350 people by 2pm,  including small children and old folks. But voting was going ahead normally in over 1000 other stations. BY 8-00PM WHEN THE POLLS CLOSED THE FIGURE HAD RISEN TO 761 INJURED, 12 OF THEM POLICE.. *Dept of Health.

A man is being operated on for a plastic bullet in the eye, though they are legally banned in Catalonia.

Another appeared dead but was successfully reanimated. A woman volunteer had her fingers broken on her left hand, one by one, and her clothes torn open. etc. etc.

Barca football club cancelled their match against Las Palmas but the League refused so it was played behind closed doors.  They won 3-0.

In some cases the riot police were successfully resisted and in others the ballot boxes could nor be found during the police raids. see video

The Spanish leaders have made statements praising the police actions and the Spanish media is showing a highly censored version of events.

The Spanish Guardia Civil are unreformed from the Franco Dictatorship and the disgraceful PP govt has survived multiple scandals in the last 5 years getting support by the fascist tactic of whipping up anti Catalan hysteria. Many Spanish now believe Catalans need to be severely repressed.

Thousands of people  had gathered in the rain from 5.00 am to protect the referendum schools.

Voting boxes and papers were smuggled in without problems.

It has been announced that when polling stations are closed down you can now vote in any other, checking your ID number.

A last survey endorsed by Julian Assange predicted an 83% vote of Yes for independence.

Police have invaded and occupied the Catalan Government communications center where counting of votes might take place.

The mobilization multiplied from five in the morning.

Thousands of people spent the night, with activities of all kinds – games, music or meals – to prevent security forces from sealing off polling stations. The Mossos  police had the order, from the Spanish controlled TSJC court, to seal them or evacuate them before six in the morning, but in most of the polling places at this time they have not yet arrived.

In fact, the number of people who spent the night at schools  multiplied by five in the morning. In some cases, the concentrations exceeded 500 people – there was a school with a thousand volunteers -, waiting for the arrival of the police.

In total, according to Open Schools, the entity that has been tracking, there were 1,134 electoral colleges occupied at 6.00 am of 2,315 . The grouping made available to the public a computer tool through which you can update the status of each school.

Early in the morning, in some schools, the polls and ballots began to arrive, waiting for 9.00 am  to be the voting points. Instructions for volunteers were to spend all day around schools to prevent them from closing.

An appeal has went out for more volunteers to defend polling stations while the votes are counted as extremely violent police attacks continue. Estimates are that up to 2 million have voted despite the danger. Tests have been done by the organisers to check and prove that you couldn’t vote twice, a program checked ID numbers against a census.

The CUP party has joined the calls begun by the anarchist CGT union for a General Strike on Tuesday against the state repression.

Victory celebrations  began in Barcelona’s main square. A fascist demonstration, escorted by the Spanish police around Barcelona center, had trashed the stage set up by the Asamblea National de Catalunya, ANC.

Now pacifist tactics may be difficult to maintain as the voting has finished and serious rioting could occur if the Spanish police think they can continue beating up people with impunity. Catalans are not pacifists and 844 people have been injured without reply.

The Referendum Web  (web del Referendum) which was one of many sites closed by the Spanish State,  is back on air, in 4 languages with . At present find it CLICK HERE

Various websites have been closed down, including Omnium and Assamblea Nacional de Catalunya, the civil pro independence platforms which have been key in organising the one million strong demonstrations.

But exact copies of  some sites have immediately appeared. The new address of ANC is  www.assemblea.eu

A website dedicated to postering for the referendum, #Empaperem,  has been closed down and reappeared, along with that of CUP, now at  http://cup.cat/ , the ‘anarcho – republican’ party  that has promoted the referendum. 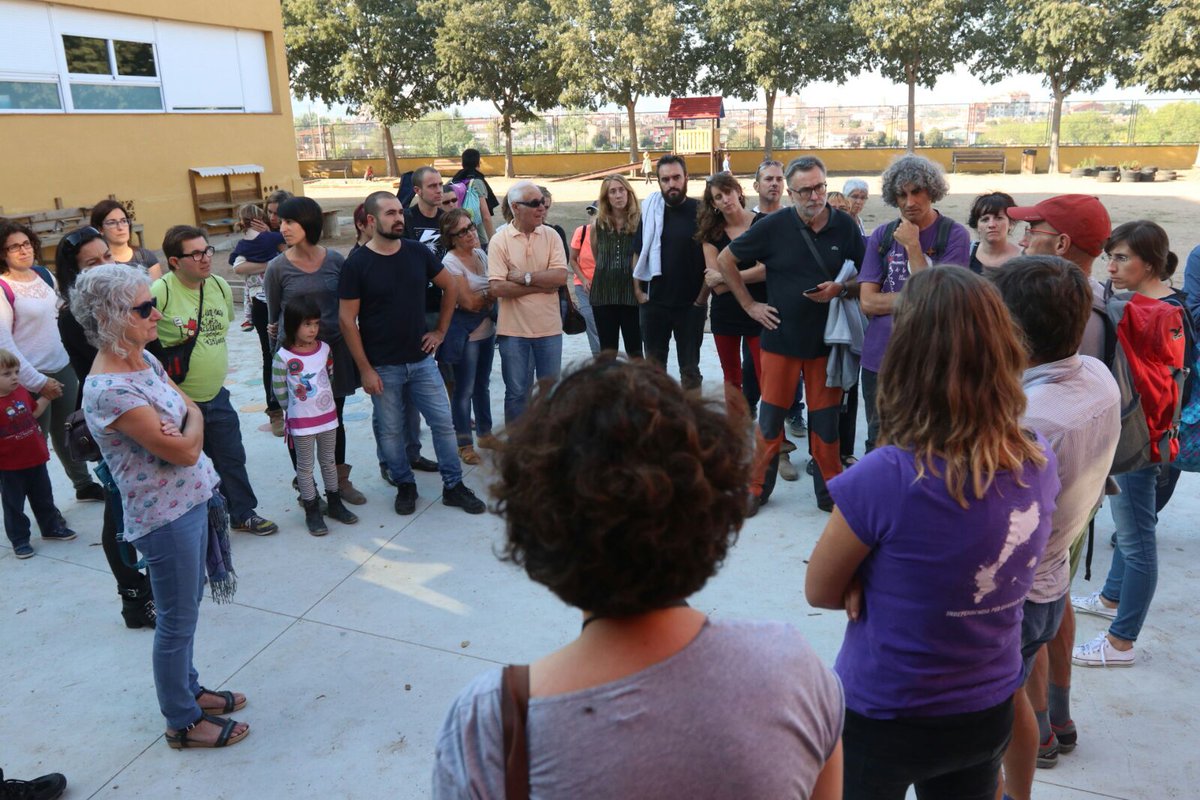 Thursday’s School and University strikes and occupations were a huge success, with an estimated 100,000 on one march in Barcelona city.

Thousands of tractors organized by the Farmers Trade Union are entering towns and cities to blockade the polling stations against Spanish police. More Defense Committees have been set up to help coordination.

The government are threatening to jail head teachers ad school directors along with 730 Mayors of municipalities which have supported holding Sunday’s referendum.

The Madrid regime has seized the Catalan finances, (but this month’s wages had been apparently paid early),  , brought in 3 cruise ships full of riot police, decreed the takeover of the Catalan regional police, seized millions of leaflets, posters and ballot papers, raided houses and closed down pro independence meetings.

It has also banned many pro independence websites, called for twitter and facebook prosecutions, imprisoned govt officials and charged 730 mayors,  threatened to close any radio, TV or news outlet that informs about the Referendum,  etc. etc.

The Madrid based state had ordered police forces to take over and cordon off the polling stations  from Saturday.. But the Catalan police who should act first  obeyed the orders of their director Trapero, who  avoided jail by agreeing to the Madrid orders  but forbidding use of physical force by his Catalan police..

When the Madrid order was formalized legally a clause was added that ‘activities in the colleges could continue until the Referendum , until 6.00 am Sunday’. This was the clue, allowing the Catalan police to not evict the polling stations, by then occupied en masse with marathon 48 hour social activities of every description.

Police couldn’t  have Stopped the Referendum without army intervention

There were 2315 polling stations and a maximum of 20,000 riot police mobilised from various forces, which by our reckoning was about 8 cops each.

Then many of the local Mossos Catalan cops weren’t at all keen and had been allowed by their director not to use violence to clear the mass occupations.

Many millions of voting forms were seized, but you could download and print your own and the ‘invisible army’ did a great job of making the ballot boxes appear on time.,. 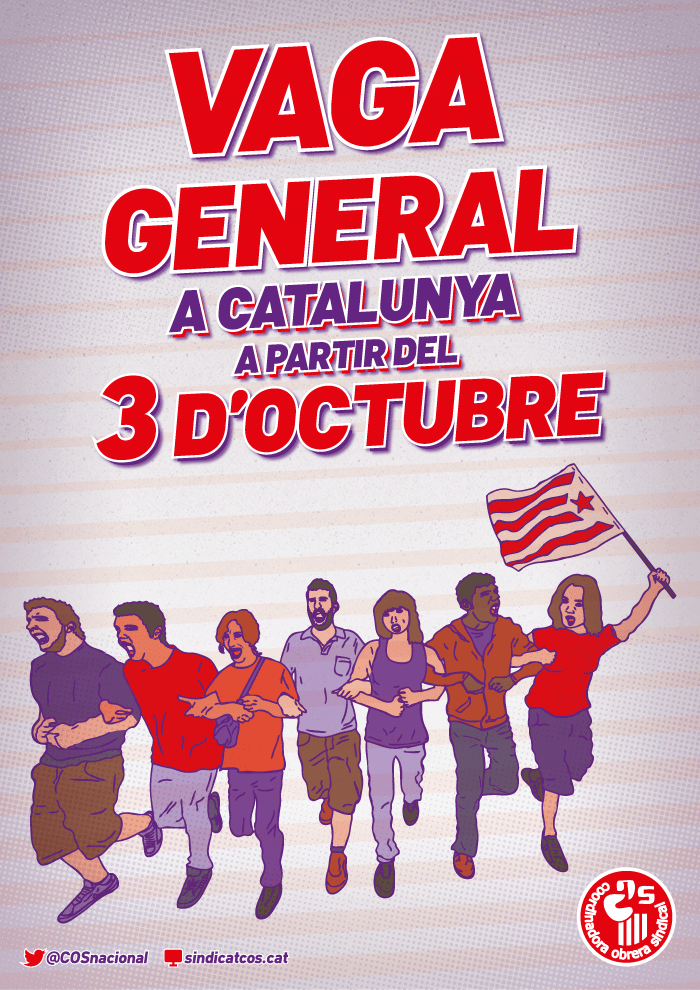 late news: A platform which includes the majority ‘socialist’ UGT and ‘communist’ CCOO trade unions plus the ANC and Omnium have now backed the  General Strike Tuesday 3rd, called by the anarchist CGT.

Catalonia: Right and Left pact for a Republic

When will we see Tanks in Barcelona streets?