It’s not easy being a Catalan bank these days. In the last few weeks the region’s two biggest lenders, Caixabank and Sabadell, have lost €9 billion of deposits as panicked customers in Catalonia have moved their money elsewhere. Many customers in other parts of Spain have also yanked their savings out of Catalan banks, but less out of fear than out of anger at the banks’ Catalan roots.

Moving their official company address to other parts of Spain last week may have helped ease that resentment, allowing the two banks to recoup some €2 billion of deposits. But the move has angered the roughly 2.5 million pro-independence supporters in Catalonia, many of whom have accounts at one of the two banks. Today they expressed that anger by withdrawing cash en masse.

Many protesters made symbolic withdrawals of €155 — a reference to Article 155 of the Spanish constitution, which Madrid activated today to impose direct rule over the semi-autonomous region. Others opted for €1,714 in a nod to the year 1714, when Barcelona was captured by the troops of King Felipe V, who then proceeded to suppress the rights of rebellious regions.

The arrest of Catalan govt officials, jailing of the civil independence leaders at 600 kms from home and charging of 720 mayors, etc has special significance. The President of Catalonia, LLuis Companys, (centre of photo below) was executed by Firing Squad, on the orders of the rebel fascist coup of General Franco, on 15th Oct, 1940. The present minority govt is the direct decendent of those fascists. The photo above of Company, center,  is with members of the cabinet in an earlier jailing.

Some bank customers withdrew a lot more than that. The council of Argentona, a small town outside Barcelona, closed its accounts at Caixabank and Sabadell and transferred all €2.25 million of its funds to a branch of the Dutch lender Triodos. If other institutional or business customers follow Argentona’s example, Caixabank and Sabadell could have a big problem on their hands.

ANARCHIST CGT CALLED THE SUCCESSFUL GENERAL STRIKE..  Most anarchist comrades we personally know in Catalonia oppose the idea of a Catalonian state. But they also told us that there are also anarchists that support the independence process.

After the assembly we had a discussion with an anarchist comrade who took part in the assembly. She told us that they call themselves “Independentistas” and for her the process is to breakaway from Spain. She said that she is not fighting for another state, but to weaken the central Spanish state. The idea is that as soon as Catalonia breaks away, other regions like for instance the Basque country sooner or later will follow. In the end one of the biggest EU member states would break apart. ..Enough is Enough

The fallout of political instability in Catalonia is being felt across the whole economy. Real estate investment in the region, both domestic and foreign, is drying up. Starwood European Real Estate Finance, the European subsidiary of the U.S. property giant Starwood Capital, has announced that it’s shifting its focus away not only from Catalonia but Spain as a whole, and toward more stable European markets.

Tourism to Catalonia, Spain’s most visited region last year, slumped by 15% in the two weeks following the referendum on independence, according to industry experts. Catalonia received about 18 million visitors last year, and tourism accounts for around 12% of the region’s GDP, with industry and trade as the other main contributors.

Those sectors are feeling the pinch too, partly due to the dark clouds of uncertainty and dread surrounding the region’s short-term future, but also as a result of a gathering boycott against Catalan products in other parts of Spain.

“There is a widespread rejection of Catalan products and more and more restaurants and supermarkets are changing the brands they offer,” says Bartomeu Servera, the president of a food and beverage trade association in the Balearic Islands. “It is especially noticeable in the drinks sector, but it affects all products that are identified with Catalonia.”

It’s not just Catalan companies that are being hurt. Many Catalan products include components and raw materials from other parts of Spain. A case in point is the Catalan ready-made pizza company, Tarradellas, which has been on the sharp end of the boycott for months. The tomato sauce it uses to top its pizzas is provided by Conesa, a tomato-processing company in Extremadura, an impoverished region on the border of Portugal in the South West of Spain.

Speaking to the Extremaduran newspaper Hoy Conesa’s Managing Director, Manuel Vázquez Calleja, warned that “by refusing to buy Catalan products such as those of food company Tarradellas, we could be shooting ourselves in the foot, as their pizzas are covered with our tomatoes… Probably the tuna they use comes from Galicia and the flour from Andalusia.”

This self-defeating pattern is a constant feature of the economic tug of war between Madrid and Catalonia — a war that began when Madrid seized full control of the accounts of Catalonia’s 298 regional public bodies in the wake of the banned referendum on Oct. 1. Shortly after that the Rajoy government passed a law making it much easier for Spanish companies to move their registered address.

The move helped spark a mass exodus as over a thousand Catalan-based businesses, including six of the seven firms listed on Spain’s benchmark index, the IBEX 35, opted to move their registered address outside Catalonia. The extent to which it was a voluntary move is debatable. Some companies, including Spain’s car manufacturer SEAT, have accused the Spanish government and King Felipe VI of pressuring them to leave the region.

On Thursday Spain’s Economy Minister, Luis de Guindos, raised the stakes even further, warning that the independence of Catalonia could spark a bank run in the region. Independence would be “horrific;” it would amount to “financial suicide,” he said.

But financial suicide for whom?

The web of interdependency between Spain and Catalonia is so tightly woven that if one goes down, the other goes with it. Catalonia accounts for 20% of Spain’s GDP, and roughly a quarter of Spanish exports and the government’s tax revenues. Without it, there’s no way the Spanish State would be able to meet its gargantuan financial obligations — not even with Mario Draghi’s help!

This point, despite being glaringly obvious, rarely gets a mention in the Spanish press. It’s one of the reasons why so many Spanish people seem to think that Catalonia’s economy can be severely weakened without there being serious repercussions for the rest of the country. Some even see it as a zero-sum game: what’s bad for Catalonia’s economy must be good for Spain’s.

Another dangerous myth is the absurd notion that Catalonia’s independence movement can be snuffed out with just the right amount of political repression and cultural cleansing. A region where roughly half of the population wants greater autonomy is about to have what little autonomy it still has snatched away from it.

By activating Article 155 today to revoke Catalan autonomy, Madrid has set itself on a risk-strewn path whose final destination is far from clear. What is clear is that from this point on Madrid will have full control of the main organs of institutional power in Catalonia, including the region’s police force, the Mossos d’Esquadra. The Finance Ministry will maintain complete oversight of every cent that is spent or raised by the regional government, at least until new elections are held. It will also take over Catalonia’s public television and radio broadcasters to ensure they are more “neutral.”

how to close a motorway

Madrid has announced plans to call regional elections in January. Hard-line elements within the governing People’s Party have proposed banning all pro-independence parties from taking part, but that may be a step too far even for Rajoy’s government, which has still not clarified whether it plans to have Catalonia’s President Carles Puigdemont and other elected leaders arrested.

Naturally, these measures, which are more fitting of a capricious tin-pot dictatorship than a modern, self-respecting democracy, will do nothing to improve relations between Catalonia and the rest of Spain. Moody’s warned this week that activating article 155 may ensure that Catalonia remains a part of Spain in the short term, but over the long haul it will make it even more difficult to resolve the conflict.

If anything, the repression is more likely to strengthen rather than weaken the resolve of Catalonia’s independence movement. As 29 Nobel laureates wrote in a letter urging the Spanish government and the EU for dialogue and mediation in the conflict, a people that feels repressed rarely goes quietly into the night. By Don Quijones. 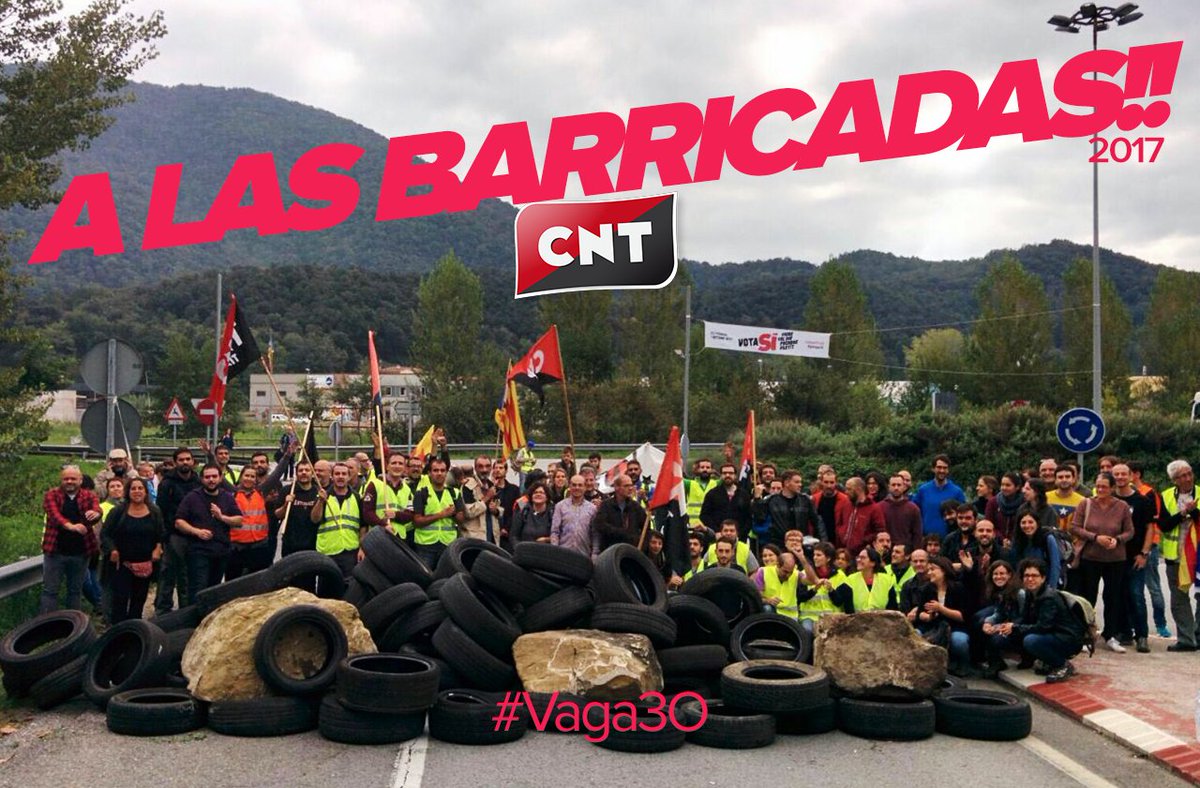 One thought on “Catalan Crisis Snowballs into an Economic Crisis”