More than 200 artists and personalities linked to the world of culture have joined a manifesto in support of rapper Josep Miquel Arenas, known as Valtonyc, after the Supreme Court has confirmed the sentence of three and a half years in prison, to ask his “total and complete absolution”.

Valtonyc has now been invited to more than 20 Catalan festivals in protest for the condemnation of the “Supreme” Court.

The main festivals of the Països Catalans (includes Valencia, Baleares ..) are in solidarity with the Mallorcan and include  him in the programming of their next editions, opening the way for a huge freedom campaign when he cannot appear. Included is the most popular Catalan Festival Primavera Sound de Barcelona.

The ”Spanish” Borbon King was appointed by the fascist dictator Francisco Franco after murdering hundreds of thousands of people to seize power for the far right and the church and hold it, with western collaboration, for forty years.

King Juan Carlos abdicated in favour of his son, supposedly for health reasons, but amid a cloud of scandal and derision, due to the prosecution of family members for corruption, elephant hunting while honorary president of the World Wildlife Fund, etc. etc. Now the Supreme Court (appointed via the corrupt right wing rulers)  demands a return to unquestioned obedience.

Writers’ group PEN Català‏ also criticised the decision saying that it “proves Spanish Gag Law is a serious attack on freedom of expression”. In a statement the group also said that it was “also concerned about the ‘chilling effect’ of this law on artistic expression”.

The second charge against Valtonyc’s lyrics was ‘glorification of terrorism’ in praising the historical terrorist groups ETA and GRAPO for their anti-fascism, etc. It is still taboo to tell the other side of the story.  It was ETA who unilaterally who finally laid down their arms . The Spanish State has always claimed a monopoly on violence and terror, even employing its own death squads against ETA and prohibiting Basque parties, newspapers, demos etc to this day, refusing all amnesty and reconciliation.

As in Turkey today the far right needs a convenient enemy to unite its rabid supporters, be it Kurds, Basques, Catalans or in this case rebellious artists.

In January of this year the Supreme Court sentenced rapper César Strawberry, singer of the group Def Con Dos, to one year in prison for the crime of glorifying terrorism or humiliating the victims, for some tweets that he published in 2013 referring to Carrero Blanco ,  Ortega Lara and Franco.

The five members of the musical group Soziedad Alkoholica were accused, together with their representative, of glorifying ETA terrorism in January 2016 by Baltasar Garzón, following the denunciation of the Association of Victims of Terrorism in 2004. In its lyrics of Síndrome del Norte , Ya Güelen, Pigeons and Vultures and Pig Explode, the artists cite phrases such as “exciting going to a bar and taking you out to host the National” or “fascists disguised as pacifists  clothed by the police.”

Rapper Pablo Hasel was sentenced in March 2015 to two years in prison for a crime of glorifying terrorism, by uploading songs in his Youtube account that contained anti police, anti monarchy and anti fascist  lyrics and ‘glorified terriorism’.

from:   http://www.publico.es/tremending/2017/02/25/libertad-de-expresion-las-letras-por-las-que-la-justicia-te-puede-llevar-a-la-carcel/
The Association of Concert Halls of Catalonia (ASACC) has announced that it will add rapper Valtonyc in the next edition of nearly 30 Catalan music festivals, including Primavera Sound, Vida or Cruïlla. This show of solidarity extends to emblematic spaces such as Razzmatazz and Sala Apolo in Barcelona.

They do so in protest against the sentence for alleged “insults to the Crown”, “glorification of terrorism”, “slander” and “threats” that weighs unfairly on the Mallorcan artist.

All of them, as well as hundreds of thousands of Spaniards, agree that this measure “directly attacks freedom of expression and artistic creation.”

The Primavera Sound of Barcelona – the most popular festival in Catalonia – has been one of the festivals in solidarity. The organization has issued a statement showing its rejection of the prison sentence that the Second Chamber of the Supreme Court has unjustly ratified on Tuesday, in which the National Court [Franco’s court] handed down three and a half years in prison against Valtonyc.

José Miguel Arenas -the real name of the rapper- composed a series of songs and then published them on the Internet, allowing free access to them. In the appeal that Valtonyc filed, he tried, uselessly as it is seen, to defend his right to freedom of expression and artistic creation. The Majorcan defended that rap is a type of music with “extreme, provocative, allegorical and symbolic” lyrics.

The truth is that the sentence on the lyrics of its 16 songs has joined the music festivals of Catalonia, which have already begun to add his name to the artists announced for the 2018 editions.

Full text in Castillian at: https://www.lahaine.org/valtonyc-acudira-a-mas-de 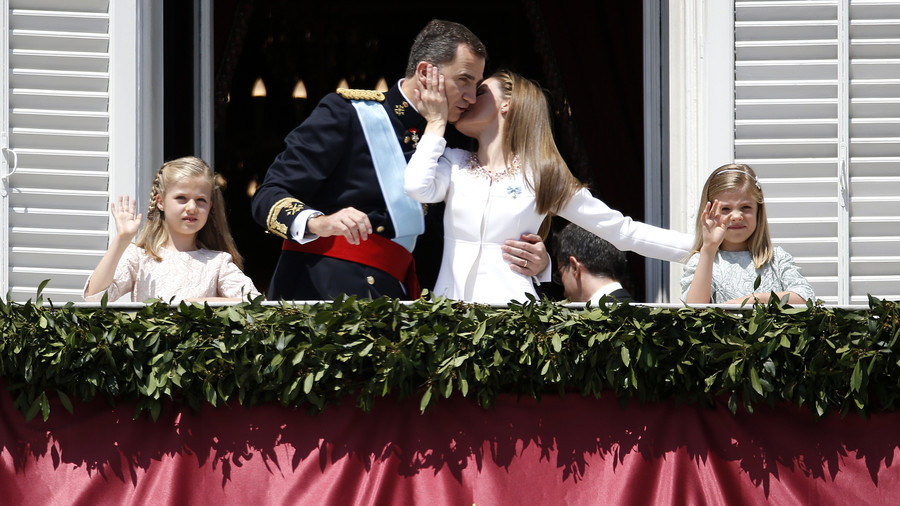 Spain’s new King Felipe VI his wife Queen Letizia Princess Sofia and Princess Leonor © Andrea Comas / Reuters
The Spanish Supreme Court has upheld a decision to jail a rapper for three and a half years for a song deemed to have glorified terrorism and insulted the crown, sparking a debate about freedom of expression in the country.

The court rejected arguments on Tuesday by little-known rapper Jose Miguel Arenas Beltran, stage name Valtonyc, that his songs were protected by freedom of expression laws, when ratifying a sentence handed down last February.

Among the lyrics deemed criminal were: “Let them be as frightened as a police officer in the Basque Country,” a reference to violence against police officers in the region by the now-disarmed Basque separatist group ETA.

Valtonyc went on to fantasize about the king having “a rendez-vous at the village square, with a noose around his neck.” In another track Valtonyc threatened to kill a Spanish politician and aristocrat involved in a corruption scandal after forcing her to “see how her son lives among rats.”

The court deemed that the Mallorcan rapper’s lyrics constituted “praise, not of political objectives but of the violent means used by the cited terrorist organizations” and upheld his three and a half-year sentence, Valtonyc confirmed the decision on social media.

Leftwing figures from Spain rallied to the rapper’s defense and branded his prosecution as an attack on freedom of expression. “Censoring a book because it speaks of corruption, sending a rapper to jail for a song, or taking down a work of art because it’s uncomfortable. The gag laws of the PP (Partido Popular) are incompatible with a fair and democratic country,” Podemos deputy Irene Montero wrote on twitter.

Valtonyc | The Free   Dec 15, 2017 – The Spanish National Court has condemned the twelve rappers of the group La Insurgencia to two years and a day of jail each, accused of the crimes of ‘supporting terrorism’ in their lyrics, a sentence that automatically gives jail time. The High Court also condemned them to pay fines of 4,800 euros and …