With the defeat of the IS in Syria and especially after the liberation of Raqqa in October 2017, the Turkish state intensified its threats and attacks on the Democratic Confederation of Northern Syria. On this background the Turkish occupation war on Afrin started on the 20th January 2018 violating international law and the sovereignty of its neighbour country.

The Turkish army has launched this war in cooperation with jihadist groups of the FSA ranks. Many of them are former Al-Qaida or IS members. Since the beginning of March, all districts and the city centre of Afrin had been under heavy bombardments, shelling and drone surveillance by the Turkish army targeting especially civilians.

#BreakSilenceOnAfrin One of the hundreds of former ISIS fighters who fled to Turkey, recruited as “FSA” and now is attacking Afrin together with turks. This is turkey’s war on Kurds.

On March 18th more than 200,000 people left the town centre and were evacuated in order to avoid a physical genocide. Since then the majority of refugees are staying in the Shehba region without security guarantees or international support.

In this new phase, the confrontation between the international powers and their interests is increasing all over Syria.

After 78 days of resistance against Turkish occupation war, hundreds of thousands of people from Afrin Canton are still displaced and facing difficult conditions. The Turkish army and its jihadist allies are implementing ethnic cleansing, assimilation and colonisation policies, making preparations to add the region Afrin de-facto to Turkey’s state territory.

At the same time thousands of jihadists have been transferred from Goutha to Afrin to create demographic changes and install an Islamic-Turkish order.

The resistance of YPG-YPJ forces in the all districts of Canton Afrin carries on, as well as the resistance of the displaced people from Afrin in Sherawa and Shehba region.

Civilians run for cover from explosions in the city of Afrin in northern Syria on March 18, 2018, after Turkish forces and their rebel allies took control of the Kurdish-majority city.

Turkey has extended it threats now towards Til Rifat/Shehba region, Minbij and Shingal. Moreover, the tension between the two blocks Russia-Turkey-Iran and the US lead International Coalition are growing.

The conditions of Afrin’s people displaced in Shehba region are still very precarious and insecure. However, works to build camps and to organised delivery of supplies and humanitarian aid are organised by the Democratic Self-administrations of Northern Syria and the Kurdish Red Crescent.

Two refugee camps have been built in Sherawa district and in the Shehba region. According to the census of Afrin and Shehba Administration, the refugees displacement situation is the following: 24,000 in Til Rifat, 40,000 in the Fafînê camp (now renamed “Resistance camp”), in Shehba’s Ehres over 37,000, 10,000 in the Kefernayê district, over 30,000 in Afrin’s Sherawa district, over 25,000 in Aleppo’s Nûbûl-Zehr subdistrict. And they estimate 100,000 people displaced in Aleppo centre.

Afrin people in Fafinê refugee camp (Shehba region) appeal to the UN: “Fulfil your duties and respect your own laws and principles! Protect Afrin people against genocide. End occupation of Turkey and jihadist FSA groups and ensure safe return of Afrin people to their homes!”.

On March 31th, the Kurdish Red Crescent delivered an aid convoy, composed by 26 trucks, to Shehba region with food supplies. Another convoy composed of 18 trucks, bringing also supplies that have been collected in southern Kurdistan (Irakian state) arrived on April 4th.

According to Russian-Turkish agreement to hand Til Rifat over to Turkey and related jihadists, Russian troops left, but the area is still under YPG/YPJ control. The Syrian regime is also present in the area since March. Moreover, after the agreement with Russia, Turkey has brought the group “Jaysh Al-Islam” from East Gouta to Jarablus. As well, jihadist fighters and families from E. Gouta and Idlib have been settled in Afrin.

The Turkish army and FSA jihadists continue to loot properties, threaten and kidnap civilians. According to reports, dozens of girls and women have been kidnapped in the Afrin city. Especially, a commander of the Hamza Brigade has been touring the neighbourhoods gathering young women, who are being held in some houses near the Vilayat Street in the city centre. Here women have been subjected to sexual violence by Turkish soldiers and FSA militiamen [1].

People are forced out off their houses and to leave them to FSA militiamen [2]. Especially, Ezidi people are threatened by FSA to convert to Islam and to obey to their “religious codes”. The Kurdish photographer Dilşan Qereçol was arrested by the Sultan Murad Brigade (Turkish backed islamist group) in Afrin region and was deported to Azaz district [3].

Turkey is trying to set up a new occupation government in Afrin. The so-called “Afrin Liberation Congress” coordinates its administration from Antep (Turkey). It has been composed by 35 men under the control of Turkish army and government, as well as of FSA.

Hasan Shindi – known for collaboration with the MIT (Turkey’s secret service) and a terroristic attack in Afrin – is the spokesperson. He stated that Afrin will belong to Turkey’s Antakya Province. However, Turkish district governors, chief constables and gendarme commanders will be in command like in Ezez, Jerablus and Mare. FSA men will be affiliated to a police force of 450 persons [4].

On this matter, TEV-DEM stated: “The Dilok (Antep) council of Turkish secret service and persons like Fuad Aliko and Ibrahim Biro were the reason for 1500 people in Afrin, half of them civilians, being killed. We call ENKS and YEKÎTÎ to show clear attitude and to separate from them.” [5]

On April 2nd, the Turkish army carried out an operation against YPG/YPJ forces in the surrounding of Rajo and in the triangle Bilbil, Shera, Mabeta using also warplanes bombardment. YPG/YPJ report no losses during this operation. 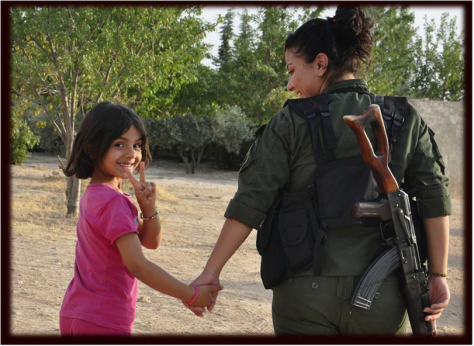 A girl rescued from ISIS terror in Manbij is welcomed by a revolutionary YPJ volunteer.

Turkey’s closed the Euphrates dam cutting-off the water supply of Minbij, which Turkey did never during the years of ISIS terror regime in Minbij.

Moreover, attacks by explosive devices are carried out in the city: 1 US and 1 UK personnel of International Coalition were killed in an explosion. Further 2 explosives devices were found and dismantled on April 1st.

Despite Donald Trump’s announcement to withdraw US troops from Syria within a short period of time, the US army has increased its presence in Minbij and built new bases in the outskirts. Moreover, French army special forces have arrived in the city.

On April 2nd, two unknown offenders detonated two shock-grenades on motorcycles in Raqqa. As a results, 17 people were injured.

After the HPG and YJA Star units (PKK) withdrew from Shingal (Sinjar) and Erdogan started threatening Iraqi troops that arrived to ensure the security of Shingal region together with the Units of Shingal Resistance YBŞ and YJŞ.

On the 11th day of the hunger strike in front of the UN in Geneva to call for a international community intervention against Turkey’s invasion of Afrin, the PYD activists took over their turn. HDP’s Sirnak MP: “(UN) knows that Turkey commits warcrimes in Afrin but they don’t do anything (…)”.

During the march in London (UK), the police arrested some protestors, while the people tried to liberate them. In Bilbao (Basque Country), on April 2nd, dozens of women carried out a protest action against the occupation of Afrin. Moreover, in the general demonstration the banner said: “Afrin = Gaza! Stop Genocide in the Middle East” and “Stop taking our land and murdering nature”.

A new campaign “Tourism Boycott against the occupation of Turkey in Afrin” has started. The aim is to apply economical pressure, because tourism sector is an important source of income for Turkey.

A delegation from the UK reached Rojava on April, 4th consisting of Lloyd Russell-Moyle (MP/Labour), Lord Maurice Glasman (Labour), for Unite (Union Trade) Simon Dubbing, Ryan Flecher and Ibrahim Dogus (Kurdish Progress). The delegation is here to have discussions and get an impression of Rojava. [7]

After the killing of 15 Palestinians in Gaza, Erdogan and Netanyahu had a quarrel calling each others “invaders of others’ land” and “terrorist”. They both have the right to say so, since the actions of Israel and Turkey share a decades long policy of repression and massacres over people.

On March 31th, representatives of TEV-DEM and Federation of Northern Syria met with French President Macron. During the meeting, they discussed about French support in the fight against ISIS, to secure the advancements that were achieved in Syria and are threatened by Turkey’s agressions in Afrin and the whole territory of Northern Syria. 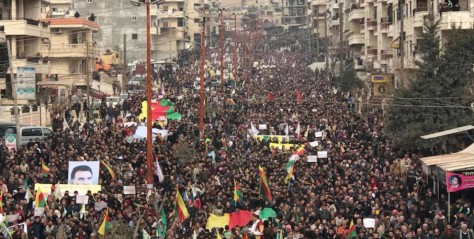 In an official statement France praised the SDF in their fight against ISIS in Northern Syria, condemned Turkey’s occupation of Afrin and offered mediation between Turkey and SDF to bring back stability. According to different evaluations President Macron took this decision to have a seat in Syria’s reconstruction, to fill a vacuum if US troops might withdraw from Syria as well as to ensure France’s internal security against ISIS attacks.

USA, UK, Germany, France and more than two dozen NATO members expelled Russian intelligence officers following the attempted assassination of a former Russian agent and his daughter in UK on March 4th. In response, Russia started to expel dozens of western diplomats, as well. These are expressions of the strategic global confrontation between the blocks USA/EU and Russia that are also reflected in the war in Syria and had a great impact on the establishment of a Turkish-Russian alliance in the war on Afrin [9].

According to the Til Rifat agreement, Turkey and its proxies could gain control over a relevant part of Syrian territory. Hereby Russia tries to balance and use Iran and Turkey against one another in Middle Eastern policies, while gaining more hegemonic influence. Further Russia strives to aggravate contradictions inside NATO through Turkish threats on Minbij and East Euphrates region. Also severe contradictions on US security policies and military strategies within US government, CIA and Pentagon evoked.

While US President Trump announced that US troops would withdraw very soon from Syria (and froze funds for the SDF), US Army commanders stressed the necessity to carry on the fight against ISIS and hold positions in Syria to determine its future and control energy resources. Further, Saudi Arabia stated that they would to be willing to contribute economically to US army permanence in Syria, to counter-act Iranian influence in Middle-East.

One thought on “Afrin and Northern Syria: weekly News Update”