…  In my view animal rights needs libertarian ideas more than ever before. In the recent years the movement in Britain has suffered unparalleled repression. This country is not unique in this either – as animal liberation has across the world, so in its wake has followed a state and corporate backlash.

Anarchism – with its critique of power, hierarchy and capitalism – can help us understand how repression works and how we can work to resist it. The threat of far right and racist infiltration has grown as well. Attempts in the past to use AR as a vehicle for fascism failed. Now thanks to the internet, social media, low morale and  fragmentation – and the naïve belief some hold that fighting for animals takes precedence over everything else- extreme right wing groups are trying to gain a foothold.

These problems don’t affect animal rights alone. Anarchism and the libertarian left also face them.  The Earth First Journal published an article entitled “The New Face of the Radical Right” about Anarchist Nationalism. Sounds like a contradiction in terms, doesn’t it? But some on the so-called radical right are suggesting building alliances with groups such as Earth First! to spread an anti-state but also nationalist/fascist agenda. Animal rights also needs anarchism because unfortunately those who should know better are now trying to push it in a statist and electoral direction. Over the decades politicians of all parties have lied and betrayed us again and again. It used to be the case that only the established, reformist national societies advocated political campaigning. Sadly  it is now some grassroots activists too.

Does anarchism need animal liberation? In my opinion, yes! A philosophy which is based on removing hierarchies between people can’t ignore human domination of the rest of nature. Ecology and animal rights are no strangers to anarchism.

The greening of anarchism continued in the 20th century with anarcho-naturism,  a  society composed of  vegetarian communes or ecovillages where humans lived close to nature. Though influential, it remained outside mainstream anarchism, which remained class-struggle centred, and was disparaged as “lifestylist”.

A key figure of the 20th century was Murray Bookchin who developed the idea of social ecology. He was opposed to lifestylist or primitivist anarchism and believed that technology wasn’t inherently destructive. 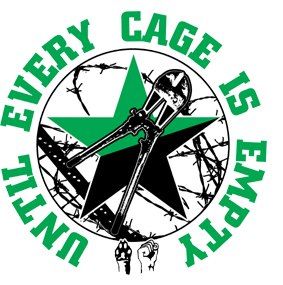 Domination of nature, he said, was preceded by human domination. This was the beginning of class society, when those in power began controlling the means of production: “Just as men are converted into commodities, so every aspect of nature is converted into a commodity, a resource to be manufactured and merchandised wantonly.” 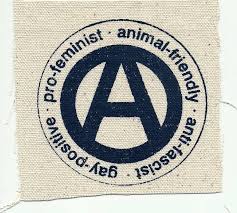 Bookchin is important as a conduit between class struggle and green anarchism and his theory of social ecology has influenced my views. I describe myself as a class struggle anarchist who understands that other forms of hierarchy and oppression exist too. Ultimately though it is class struggle that drives change and that means we will not see the end of capitalism and human and animal exploitation until the vast majority embrace it.

Red Black Green is produced by Paul Gravett, an anarchist, activist and writer.

Vegan Anarchy: Animals must have the absolute right to a decent life at their own level.

If you would like to know more about animal rights and anarchism, an excellent pamphlet I would recommend is “Beasts of Burden: Capitalism, Animals & Communism”…READ HERE . 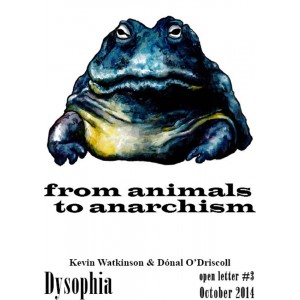 This 36 page open letter takes a critical look at the politics of animal rights and animal liberation. It argues that animal rights as a philosophy is fundamentally flawed as it does not go far enough to criticise the contemporary political structures that gave rise to the animal exploitation industry. It points out that for animal liberation to succeed it must be allied to a wider political critique of capitalism and social relations, namely in the form of anarchism. Along the way it also identifies inconsistency where some anarchists have applied their own critiques when it comes to examining human-animal relations, offering a challenge to them as well. Both authors have been involved in animal rights campaigning and anarchist organising for many years.

It can be downloaded for free here, or paper copies can be purchased from Active Distribution. 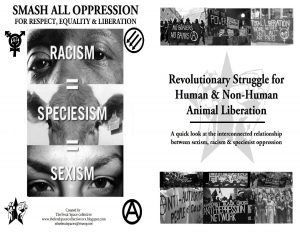 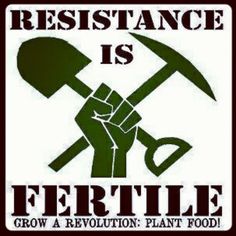 *  Why growing up Anarchist made me a better Permaculture Designer

One thought on “Animal Rights from an Anarchist Perspective”