On Frida’s blog HERE she details daily the 1000’s of horrific femicides and how to show solidarity   https://fridaguerrera.blogspot.mx

Before she is murdered, this post is by feminists showing support for Frida Guerrera, a journalist and activist against femicides, who is receiving more death threats for her work.

Both the previous threats and those she received recently will not stop the courageous and honest work she has been doing.

On July 2, 2018, the feminist activist and journalist FridaGuerrera Villalvazo began to receive more hate messages in which she was harassed and threatened with death due to her journalistic work (documenting and opposing Femicides) .

Since 2016, Frida Guerrera has dedicated her time to documenting cases of feminicide, throughout the country, and has accompanied the families of the victims, not only telling their stories and giving them a voice, but also supporting them with legal advice by an office of lawyers.

The work of FridaGuerrera has been recognized both nationally and internationally, not only for the professionalism and sensitivity with which it addresses each case of feminicide.., but also for the serious situation that exists in Mexico regarding the issue of violence against women.  Proof of this is that the number of femicides registered in the country since January 1, 2016 to July 2, 2018 has been 5, 347 cases.

Beyond the number, Frida  has given her face and name to every case she has come across, she has given a voice to the families, which in most cases are ignored by authorities and by civil society, but above all has shown the ineptitude and indolence with which the authorities have tackled the femicides,

We want the back ALIVE

Frida Guerrera has shown us how the bodies responsible for providing justice have refused to carry out their work and, on the contrary, have dedicated themselves to revictimizing women and their families, denying access to prompt and expeditious justice, which has only been translated into impunity and especially in the increase of crimes against women for the simple fact of being women.

95% of Mexican femicides are never solved

FridaGuerrera began to document the feminicides that occurred throughout the country in 2016 and as soon as possible, she contacted the families of the women to give them face and voice.

One of the most emblematic cases is “Little Red Socks” a small girl who, thanks to FridaGuerrera, today we know her name was Lupita, which showed up the null interest of the authorities in justice

This led to the beginning of harassment of FridaGuerrera who belongs to the Mechanism of Defenders and Journalists of the nation since April 5, 2017,  in this first cyberbullying she was victimized by the so-called “Legion Hulk”.

In May 2017, FridaGuerrera received threats on her YouTube channel from Said García, who has already been identified by other people and who was in fact arrested by the authorities of the state of Puebla. However, the specific case of threats to FridaGuerrera it has been shelved due to the ineptitude of the authorities and it is no longer known or in what Public Prosecutor’s Office the investigation folder is located.

Both the previous threats and those that he received recently will not stop the courageous and honest work she has been doing, since there is an urgent need not only to count the number of women murdered because they are women, but also to work on the search for justice because otherwise you can not put an end to this cancer called femicide. that overwhelms the country .

Therefore, the Peninsular Feminist Network demands that the federal authorities and the City of Mexico commit themselves to guarantee the safety and physical and emotional integrity of FridaGuerrera Villalvazo. We urgently call on civil society in general to pay attention and avoid that more activists and journalists continue to be victims of threats and even murders because of their work.

11 years ago, just in the month of June 2006 – FridaGuerrera Villalvazo  began to take up the stories of repression suffered by the the government of Ulises Ruiz Ortiz, thenstories about violation of human rights., She met the Triqui women and her interest in  defending women increased,   but it has not been easy, and Frida has suffered sexual violence on social networks.

On Frida’s blog HERE she details daily the horrific femicides and how to show solidarity   https://fridaguerrera.blogspot.mx/“

The experience of sexual violence through social networks is a warning signal for Frida, it was hard for her to understand how divulging feminicide and violent deaths could cause harm to third parties when her mission was to raise awareness to stop this massacre that Mexican women are experiencing.

“..  I could not wait for something physical to happen to me because I continue to make the cases known through stories, I give voice to those women who were murdered so that their stories can be read, then I denounce them before the justice authorities, “ she said. Frida went before the Special Prosecutor’s Office to get the attention of defenders and journalist. …” I am a woman and it hurts me that women are killed by violence”.

Being a woman and telling stories about women has been a challenge for the blogger and activist, she has broken through her fears and  becomes increasingly sensitive. Frida not only reports the facts of what happened to each woman, she tells their stories, their anecdotes, their tastes, their family and their being as a woman.

“They are the ones who speak, I only give them voice, re-telling the things you see and feel, if you do not get involved, you just do not feel, “she said.

Frida began a year and a half ago to register in a database information on femicides and violent murders of women, beginning first with the state of Oaxaca, and then nationally, currently it has a general record of the entire years 2016 and 2017.

For example she shared that in San Luis Potosi feminicides have risen, in 2016 there were apparently 3 or 4 women, and in this 2017 there are 13 femicides and 2 violent murders of women.

“Violence is lived by all Mexican women, stories have been impressive, including those no longer those of reproductive age. They also kill minors, I have a case of a 3 year old girl  …. but also adult women of 70 years old, it is terrible “.

Frida’s heart and spirit seem to falter at times, she is a woman and that hurts, but she breathes, all air and keeps spreading it, because if she does not translate (the femicides) into text will be more difficult for justice to come.

“Sometimes I remember … their smiles and looks, sometimes I cry out in anger, I swear and explode because things are so ugly,

but I get up and I keep typing, sometimes I stay up late and I do not sleep because I know it’s another woman, one like me, one that came to this planet to live and not to be killed, “she said.

Following are the states of Puebla, Mexico City, Guerrero, Michoacán, Guanajuato and Oaxaca with 46 feminicides. and 15 violent murders, the last occurred in Ejutla de Crespo where a 31-year-old woman who was shot to death while accompanying her partner. 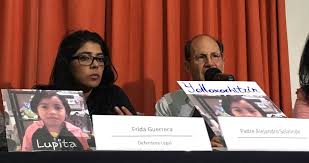