October 15, 2018 “Information Clearing House“ –  Brazilian democracy is on the brink of the abyss. The institutional coup that was set in motion with President Dilma Rousseff’s impeachment and led to the unjust imprisonment of former President Lula da Silva is all but complete.

The consummation of the coup has acquired a meaning that is quite different from what was initially intended by many of the political and social forces that promoted it or just would not disagree with it. Some of these forces either acted or reacted in the honest belief that the coup was aimed at regenerating Brazilian democracy by fighting corruption, while others saw it was a way of neutralizing the elevation of the popular classes to a standard of living that sooner or later was to be a threat not only to the elites but also to the middle classes (among whom there were many who were the product of the redistributive policies against which they were now turning).

Bolsonaro has announced that Indigenous land rights will be abolished when he becomes president.

Of course none of the two groups spoke of a coup and both believed that democracy was there to stay. They were unaware of the existence of three ‘time bombs’ which, although built at very different times, could explode all at once. Were that to happen, democracy would show its frailty and possibly prove unable to survive.

The Brazilian feminist movement is mobilizing to stop a tsunami of US backed neo fascist patriarchy.

Built in colonial times and during the independence process, the first ‘time bomb’ was detonated in a particularly brutal way on several occasions throughout Brazil’s modern history, but was never effectively defused. It is the very DNA of a society divided into masters and servants, oligarchic elites and the “ignorant” people, institutional normalcy and extra-institutional violence – in a word, an extremely unequal society in which socio-economic inequality has never been extricated from racial and sexual prejudice.

see also : Brazilian ‘Trump’ to win 1st Election Round?? What a Disaster

Despite all their mistakes and defects, the PT (Workers’ Party) governments were unparalleled in the manner in which they contributed to defuse this bomb, creating policies of social redistribution and fighting racial and sexual discrimination in ways that were unprecedented in Brazilian history.

For the defusing to be effective, these policies would have to be sustainable and held in place for several generations, thus keeping the memory of extreme inequality and crude discrimination from being susceptible to political reactivation by hostile forces.

Since this has not been the case, those policies have had other effects but failed to defuse the time bomb. On the contrary, they provoked those who had the power to activate it into doing so as soon as they possibly could, before it was too late and the threats posed to the elites and the middle classes became irreversible. The overwhelming demonization of the PT by the oligopolistic media, especially from 2013 onwards, exposed this desperate wish to stop the threat.

The second time bomb was built during the military dictatorship that ruled the country from 1964 to 1985 and in the course of the process whereby the transition to democracy was negotiated. It consisted in making Brazil’s Armed Forces not only the guarantor of the country’s defense against foreign threats, as is usually the case in a democracy, but the ultimate guarantor of the domestic political order.

What “ultimate” means here is a state of readiness to intervene at any given moment defined as exceptional by the Armed Forces. This was what (unlike Argentina, but very much like what happened in Chile) not only made it impossible to punish the crimes of the dictatorship but also allowed the military to impose on the 1988 constituents 28 paragraphs devoted to the constitutional status of the Armed Forces.

That was the reason why many of those who ruled during the dictatorship were able to continue to rule as elected politicians in the democratic Congress. The calls to military intervention and authoritarian militarist ideology remained latent and always ready to explode, so that when members of the military began to intervene more actively in domestic politics in recent months (calling for Lula’s imprisonment, for instance), it all seemed normal given the exceptional circumstances.

The third time bomb was built in the United States after 2009 (the year of the institutional coup in Honduras), when the US government first became aware of the fact that the subcontinent was escaping the control it had uninterruptedly maintained (with the exception of the Cuban “distraction”) throughout the 20th century.

This loss of control presented two dangers to US security: the challenging of unrestrained access to the vast natural resources, and the increasingly troubling presence, on the continent, of China, a country that way before Trump had been viewed as the new global threat to the international unipolarity the US had been able to achieve with the fall of the Berlin Wall. Thus the bomb began to be built with the help not just of the traditional mechanisms of the CIA and the US Army School of the Americas, but most of all the new mechanisms of the so-called defense of “market-friendly democracy.”

Brazil: A wave of homophobic attacks in wake of far-right candidate’s win  Since the October 7 first round of Brazil’s presidential elections, which saw far-right candidate Jair Bolsonaro likely to win the presidency, some of his supporters have set upon LGBT people and minorities on social media as well as in the streets. Homophobic, racist and anti-semitic inscriptions …Similar reports appeared online throughout the week

This meant that, in addition to the US government, intervention could enlist civil society organizations linked to US economic interests (such as those funded by the Koch brothers). In other words, a defense of democracy dictated by the interests of the market and therefore likely to be discarded whenever those interests so demanded. This time bomb became operational with Brazil’s 2013 protests and underwent improvements with the historic opportunity provided by political corruption.

The major involvement in the judicial system on the part of the US had begun in the early 1990s in such countries as post-Soviet Russia and Colombia, among many others. When the issue is not regime change, intervention needs to be depoliticized. That is what the fight against corruption is all about. We know that the most important data on the Lava-Jato operation was fed by the US Department of Justice, the rest being the product of despicable “rewarded delation” (a type of plea bargaining).

Judge Sergio Moro became the main agent of imperial intervention. In the case of Brazil, however, the fight against corruption alone would not be sufficient. It was enough to neutralize Brazil’s alliance with China in the context of the BRICS, but not to open Brazil fully to the interests of multinationals.

In fact, the policies pursued by Brazil over the last forty years (with some dating back to the dictatorship) resulted in the country possessing until recently vast oil reserves outside the international market, two major state-owned companies and two state-owned major banks, and 57 tuition-free federal universities.

What this means is that this is a country far removed from the neoliberal ideal, and that for it to move closer to that ideal a more authoritarian intervention was needed, given the Brazilian people’s degree of receptiveness to the PT’s social policies. Hence Jair Bolsonaro’s emergence as the markets’ “favorite candidate”. What he says about women, black people, homosexuals or torture hardly matters to “the markets”.

It hardly matters that the climate of hatred generated by him is setting the country ablaze. In the early morning of Monday, October 8, Moa do Katende, the well-known capoeira master, was murdered in the city of Salvador by a Bolsonaro supporter who did not appreciate hearing the master voice his support for Haddad (the PT candidate). 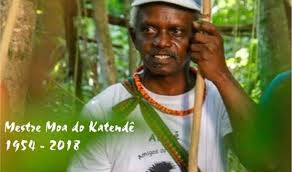 And this is just the beginning. None of it matters to “the markets” as long as Bolsonaro’s economic policies are similar to those of Pinochet in Chile. And indeed his chief economist possesses a direct knowledge of that infamous Chilean policy. Steve Bannon, the American extreme-right-wing politician, actively and openly supports Bolsonaro, but that is merely the front office of the empire’s support.

Women’s Strike‏  @Women_Strike    #SolidarityWithoutLimits  to the Brazilian women who mobilised against fascism in London to #stopDFLA while facing down their own rising misogynistic fascism at home, leading the bloc in front of the Brazilian embassy.

Those who watched “Dark Money”, a documentary about the influence of money in US elections shown on PBS (the US Public Broadcasting Service) recently, can easily conclude that fakenews in Brazil (about children, sexual education, abortion, communism, etc.) is the translation into the Portuguese language of the news circulated by “dark money” in the United States to either promote or destroy candidates. That some of the centers that produce messages are located in Miami and Lisbon is hardly relevant (even if true).

Jair Bolsonaro’s victory in the second round will amount to the simultaneous detonation of these three time bombs. It will be difficult for Brazilian democracy to survive the destruction caused by it. The second round is therefore a matter of system survival, a veritable plebiscite on whether Brazil should remain a democracy or become a new kind of dictatorship. A very recent book of mine is currently being given wide circulation in Brazil. Its title, “Lefts of the World, unite!” While standing by every word in it, the moment compels me to voice a broader cry: Brazilian Democrats, unite! 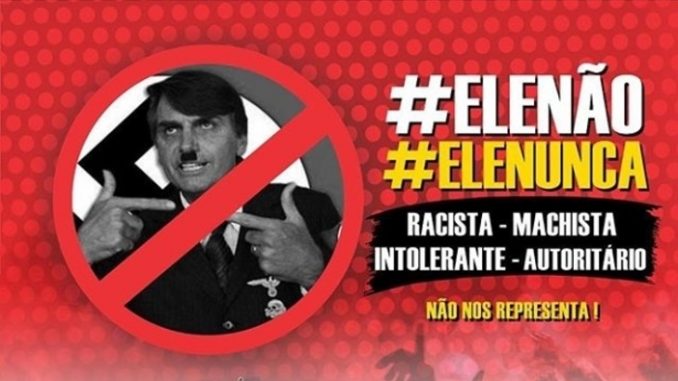 ‘Not Him! Never Him! Racist – Misogynist – Intolerant – Authoritarian – He Does NOT represent Us!

While it is true that, by siding with the uncontrolled (but quite controlled in other quadrants) behavior of a part of the judiciary in these last two years, the Brazilian right has shown a very qualified adherence to democracy, it is my belief that significant sectors of it are unwilling to commit suicide for the sake of “the markets”. They will have to unite actively in the fight against Bolsonaro. I am aware that, given their hatred of the PT, many of them will just not be able to recommend a vote for Haddad. In that case, all they have to do is say: do not vote for Bolsonaro.

I imagine and expect that this will be said publicly and convincingly by someone who was once a good friend of mine, Fernando Henrique Cardoso, the former president of Brazil who was also a great sociologist before that. Everyone, men and women alike (women will not have a more decisive role in their lives and in the lives of all Brazilians in the next few years) must engage in active, door-to- door participation.

They should also have two things in mind. First, mass fascism was never made up of fascist masses, but rather of well-organized fascist minorities who were capable of capitalizing on the legitimate aspirations of ordinary citizens to have a decent job and live in safety. Second, we have reached a point where, in order to ensure a degree of democratic normalcy, it is not enough that Haddad wins; he must win by a large margin.