via SCF   By Abdullah Bozkurt

Two front aid groups that operate in Turkey’s southeastern border provinces near Syria, led by known militants of al-Qaeda and the Islamic State in Iraq and the Levant (ISIL), have been allowed to keep collecting new recruits to fight for armed jihadist causes in the permissive environment created by the Islamist government of President Recep Tayyip Erdoğan.

A high-profile Turkish al-Qaeda operative identified as Aytaç Polat has been involved in several charity outfits to mask his jihadist activities and appears to be untouchable despite the fact that his front association was named in court proceedings as an operation that sends fighters to Syria for enlistment with armed radical groups.

The association was named as an ISIL hub during the trial of suspects who were alleged to have been involved in the deadliest terrorist attack that has ever taken place in Turkey, killing 107 people when two suicide bombers targeted NGOs and supporters of left-wing and pro-Kurdish parties holding a peace rally outside the Turkish capital’s main train station on October 10, 2015. 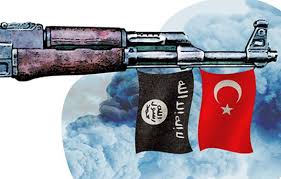 In his testimony to the court, Yakup Şahin, an ISIL suspect who purchased and stockpiled explosive materials in a storage unit he rented in Gaziantep and provided an escort to ensure the safe arrival in Ankara of the suicide bombers, said he was attending lectures of the Young Muvahhids (also written as Muvahhits in some papers).

Wikipedia: Turkey, Qatar, and Saudi Arabia have supported the Army of Conquest.[61] The coalition includes the al-Nusra Front (the Syrian affiliate of al-Qaeda) and Ahrar al-Sham, RT reported in March 2016 that al-Nusra had pitched their camps along the Turkish border and regularly receives supply from the Turkish side near the border town of Azaz.

Erdogan’s own son and family are implicated in importing and .profiting from oil from ISIL controlled territory in Syria.

In addition to Şahin’s testimony in the ISIL case, three other suspects who played various roles in the bombing attack also named Genç Muvahhidler as the place they had frequented.

Another ISIL suspect, Resul Demir, who is known as the accountant of the terrorist organization and helped purchase the cars that were used in a vehicle suicide bombing, also admitted that he was hanging out at Genç Muvahhidler.

Halil Durgun and Halil Alçay, both named in the indictment against the ISIL network, also testified that they were part of a group taking religious courses at Genç Muvahhidler. Alçay stated that he knew ISIL militants were being raised by the association when he started going there.

#BreakSilenceOnAfrin One of the hundreds of former ISIS fighters who fled to Turkey, recruited as “FSA” and now is attacking Afrin together with Turks. This is Turkey’s war on Kurds.

Wikipedia:  Turkish cooperation with and support for ISIL   Ever since the formal founding of ISIL from its Islamist predecessor groups in June 2014, Turkey has faced numerous allegations of collaboration with and support for ISIL in international media.[85][86][87][88] Several of the allegations have focused on Turkish businessman and politician Berat Albayrak, who has faced calls for his prosecution in the United States.[89][90]

Polat, who was leading Genç Muvahhidler, was working as a baker when he left his job to join al-Qaeda in Afghanistan and abandoned his young wife Zeliha (23), four-year-old daughter and one-year-old son in 2001. The battle-hardened Polat responded to a call to jihad by Osama bin Laden after 9/11 and went to Afghanistan in 2001 to enlist in the war. 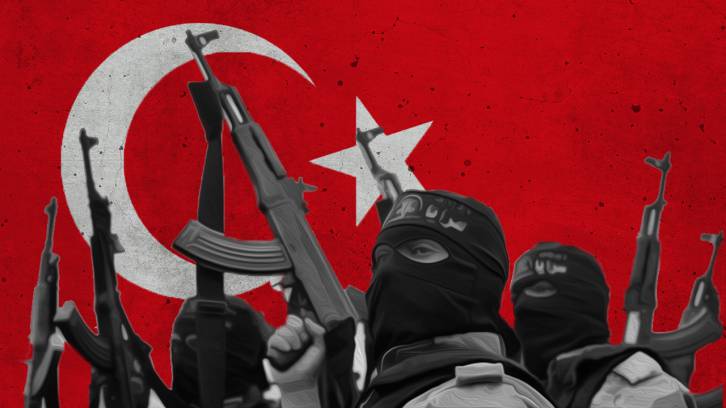 Led by al-Qaeda’s Turkish chief Mehmet Yılmaz, Polat and others in the group of 20 crossed into Iran on Oct. 8, 2001 from Turkey’s border province of Agri. They were assigned by the Taliban to a military camp in the Afghan city of Bagram and underwent training in guns and explosives. He fled to Pakistan when US forces bombed the camp, and from there he returned to Turkey in 2002. He was arrested on Feb. 12, 2002 when he landed at the airport in Ankara from a connecting flight from Istanbul.

After the Erdoğan government came to power in November 2002, Polat and many radical Islamists were released from prison as part of an amnesty bill pushed through Parliament by the ruling Justice and Development Party (AKP) government. Polat continued to be active in al-Qaeda cells and joined a group led by Mehmet Yılmaz, a Turkish national also known as Khalid al-Turki, who was killed in Iraq’s Kirkuk in June 2007 in an operation by US forces. 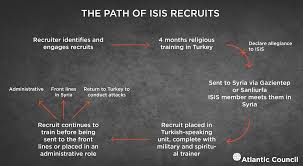 He was described by the US military as “a known terrorist and senior leader in al Qaeda who operated a cell that facilitated the movement of foreign fighters into Iraq for al Qaeda operations.”

In the same operation, another Turkish national, Mehmet Reşit Işık, known by the code name Khalil al-Turki and a close associate of Yilmaz, was killed. “These are two very dangerous, very significant international terrorists that are no longer part of the al Qaeda network,” said Lt. Col. Christopher Garver, a military spokesman, at the time. Yilmaz was detained in Pakistan in 2004 and handed over to Turkey, where he spent some time in jail before he was released by the Erdoğan government.

Polat continued to hang around the al-Qaeda cell in Gaziantep where the slain Yilmaz was replaced by his deputy, Mehmet Polat. However, both 41-year-old Mehmet Polat, the new al-Qaeda Turkish leader, and his son Mehmet Zeki Polat, 21 years old at the time, were killed in a shootout with police on Jan. 24, 2008 when police raided al-Qaeda safe houses in the Nizip and Şehit Kamil districts of Turkey’s southeastern province of Gaziantep. Wikipedia: Several ISIL fighters and commanders have claimed Turkey supports ISIL.[300][301][302] A former ISIS member mentioned that the ISIS groups were essentially given free rein by Turkey’s army. He said: “ISIS commanders told us to fear nothing at all because there was full cooperation with the Turks. … ISIS saw the Turkish army as its ally especially when it came to attacking the Kurds in Syria.”[303] Within Turkey itself, ISIL is believed to have caused increasing political polarisation between secularists and Islamists.[304] A video taken in October 2014 shows Turkish soldiers fraternising with Isis fighters near Kobane.[305] Turkish security forces dispersed Kurds who had gathered at the Turkish border with Syria to cross into Syria and fight with Kurdish militants against ISIS.[306] Oliver North tweeted a photograph which he claimed that it shows a Turkish soldier talking friendly with an ISIS anti-aircraft unit.[307]

Four suspects were killed in the armed clash that resulted in the murder of one police officer and the wounding of seven others. In total, 25 suspects were detained in the police operation. Polat was among the detainees when police found four rifles in his residence along with ammonium nitrate and other chemicals used for bomb making.

The public prosecutor demanded jail sentences ranging from seven to 16 years for the suspects on terrorism charges. Yet again, Polat and all the other suspects were released in January 2009.

Now Polat and his associates continue to operate in Turkey’s south under the cover of charity organizations. When Genç Muvahhidler was identified in court proceedings as a gateway for ISIL, it became the subject of parliamentary questions from opposition lawmakers, but the Erdoğan government declined to respond.

Only a few small media outlets covered the story, while most Turkish media, tightly controlled by the regime, ignored it. Nevertheless al-Qaeda’s Turkish branch moved another association to the forefront, Ahsen-Der Egitim, Kültür, Sosyal ve Yardımlaşma Derneği, which is the identical twin of the exposed Genç Muvahhidler.

Wikipedia: Donald Trump and the Minister of Defense of Armenia, Seyran Ohanyan, accused Turkey of supporting ISIS.[332][333]  Egypt has accused Turkish President Recep Tayyip Erdogan of being a supporter of terrorists who seek to “provoke chaos” in the Middle East.[336Eren Erdem, member of the main opposition at Turkey, CHP, accused the Turkish Government that it failed to investigate Turkish supply routes used to provide ISIL with toxic Sarin gas ingredients.[341Vladimir Putin, also, accused the Turkish government that it is purposely leading the country toward Islamization.[325] Russian Prime Minister Dmitry Medvedev said “Turkey’s actions are de facto protection of Islamic State,”

In fact the two use the exact same logo with a fighter riding a horse and carrying a black and white Tawhid flag. There are about two dozen affiliated organizations that coordinate the ISIL network in Turkey in cooperation with Genç Muvahhidler and Ahsen, yet the Erdoğan government has not taken any action against them in the border provinces.

On Oct. 10, 2014 Yalçın Bayer, a columnist with the Hürriyet daily, brought a letter he received from one of his readers in which the sender said some of his relatives joined ISIL in Syria after they started attending meetings organized by Genç Muvahhidler.nger for women and girls, and the need to interrogate the myths and biases

The person, identifying himself as a civil servant who had worked for the government for 25 years, complained that the police department in Gaziantep remained indifferent to the growing concerns of families over their members joining ISIL in Syria. He said he complained to the police in Gaziantep about the group, telling them how his sister’s son joined ISIL through this association.

But the police told him that “the group is doing nothing illegal, simply providing religious courses,” and made clear that sending people to fight in Syria was not illegal. The police even said that if they became martyrs, that would be good for the rest of the family because they would receive their reward in the afterlife.

The man also said he tried to address the issue and express his concerns with the administrators of the association, but he was threatened to keep silent just like others who had tried to talk to people at Genç Muvahhidler. The man also identified someone named Enes bin-Qaab (most likely a code name), who had been collecting fighters to join jihadist groups in Syria. 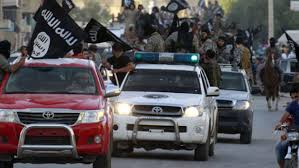 He said it was rumored that this man attracted some 6,000 people for ISIL. Although many filed complaints against this man and reported him to the police, no investigation was launched into him. Qaab was even detained briefly on the Turkish-Syrian border as he was transporting guns and explosives but was not arrested.

Jihadist outfits Genç Muvahhidler and Ahsen-Der have not only been active across Turkey through various activities but are also involved in operations in Asian countries Bangladesh and Myanmar as well as African countries Cameroon and Uganda.

On occasion they were joined by another controversial Turkish charity group called the Foundation for Human Rights and Freedoms and Humanitarian Relief (İnsan Hak ve Hürriyetleri ve İnsani Yardım Vakfı, or IHH), a government-backed aid and charity group that has been working closely with the Turkish spy agency, the National Intelligence Organization (MIT), to facilitate jihadist terrorist groups. The IHH was named by Russia at the United Nation Security Council as an outfit that runs arms to Syrian jihadist groups.

It is clear that the Erdoğan government has been in bed with many jihadist groups, providing them a permissible environment, to say the least, and arming and funding them in the worst cases in order to promote extremist Islamist views both in Turkey and around the world.

That explains why unsavory groups like Genç Muvahhidler and Ahsen-Der have been operating comfortably in Turkey. One day Erdoğan has to be held accountable for deliberately and systematically empowering all the known, notorious al-Qaeda and ISIL figures and unleashing them to do his own and his proxies’ dirty bidding. (turkishminute.com)

Take a second to support SCF on Patreon!

COMMENTARY — How Turkey’s intel aided al-Qaeda in Syria: The case of Şen brothers