Argentina: All 12 Anarchist Comrades Detained in November Are Being Held in Preventive Detention

Note from the Chilean blog Publicacion Refractario: Despite the continuous contradictory information that has come to us from different factions regarding the detained comrades on the other side of the mountain range, which is related to the fact that their situation is not being publicized- their names, the charges, everything that happened has been silenced.

We prefer to publish the communique from the ‘Union of Lawyers and Attorneys’ who are quite clear about the recent events that have taken place in the Argentine territory… Against silence and indifference: To spread insurrectionist anti-prison solidarity.

The attacks and mass arrests of the anarchists came just before the G20 Meeting in Buenos Aires.All the detained anarchists defended by our union have been processed and placed in preventive detention.

In total there are 12 anarchist political prisoners.

One is accused of throwing an explosive device at Judge Bonadio’s car. His name is Marco Viola. Two others are accused of having attacked the tomb of the criminal chief of the Federal Police Colonel Ramón Falcón. Their names are Anahi Salcedo and Hugo Rodriguez.

There was a raid on a social center in the Barrio of Constitución, in CABA (Autonomous City of Buenos Aires) and they detained everybody who was meeting in this place, some with more permanence, others circumstantially.

ALL OF THEM have been accused of EVERYTHING.

They are all under investigation for being part of an organized structure established and created to commit offences among which are those that we have already mentioned.

Bail was refused for all of the detainees.

Now Judge Ercolini has indicted all of the accused. The prosecution ruling for PREVENTIVE DETENTION was passed. . They have ordered that ALL the anarchist detainees remain imprisoned until their trial.

The Union will appeal the resolution.

Publicacion Refractario:  On November 14, an explosive device detonated inside the Recoleta Cemetery, near the tomb of the miserable Colonel Falcon (military chief responsible for the massacres of workers at the beginning of the last century and happily executed in revenge by the anarchist comrade Simon Radowitzky). (In fact it was the anniversary of his death and just before the G20 Meeting )

As a result of the apparently premature detonation of the small bomb two people were arrested at the scene.

One of them, Anahi Salcedo  was seriously wounded (mainly wounds on the hands and face) after – allegedly – the mechanism was detonated too soon.

One of the plaques found in the Cemetery of Recoleta, after the attack on the tomb of Ramón Falcón,the fanatical police chief who led the extreme repression and mass murder of protesting workers, next to a sign that says “Simón Lives! In the hearts of All The Uprisen”, in reference to Simón Radowitzky, the 18 year old anarchist militant who assassinated Falcon in 1909.

At the same time another comrade was arrested around 7:00 pm, after  allegedly throwing a very small explosive device against the house of Federal Judge Claudio Bonadio, after being intercepted by the magistrate’s guards.

After these three arrests, the police and the press have immediately indicated the anarchist link, unleashing a hunt and massive raids against different spaces. The information from the compañerxs arrives fragmented, and several raids have continued even during these days.

Later on 10 more people were arrested in a police raid on the house where the second comrade had been living. The police claimed to have found fireworks and powder.

The press – of the left and the right – has not stopped daily intoxicating this case, with stories and rumors, using what happened to feed their own interests.

Let us remember that for a long time the comrades have accused  the police of trying to infiltrate them with the intelligence services or by provocateurs, both after the assassination and disappearance of comrade Santiago Maldonado, and now on the eve of the new summit of the G20 in Buenos Aires.

info from  from.. publicacion refractario

It now seems the attacks were genuine attempts to link the l0ng and successful history of anarchist workers struggle in Argentina with the present day capitalist crisis, mass poverty and heavy repression.

Therefore support and solidarity are even more urgently called for in the context of mass reprisals, raids and State hostage taking of completely innocent comrades, along with the three accused of setting off ‘large fireworks’, one in front of the house of a notorious judge and the other at the magnificent tomb of a fascist mass murderer.

She is Anahi Salcedo , a 33 years old

anarchist. (the bourgeois press and court and even the lawyers have repeatedly published her name and  the names of the 2 other direct defendants) She suffered severe burns, lost three fingers, and was in a coma with breathing assistance 2 days after the attack.

For example she shared the invitation to the anarchist film festival, appeals for abandoned animals and a series of talks and workshops on ”natural gynecology” and “veganism and anarchism”,   “self-defense and combat”, “etc.

Why was the mausoleum attacked?

It’s a very long story. Nov 14 is the anniversary of the killing of Ramón Falcón,the fanatical police chief who led the extreme repression and mass murder of protesting workers way back in 1909, when there was a successful general strike  against slave conditions by the anarchist Trade Union  FORA.  (See Wikipedia report below)

In this context the attacks on property were part of an ongoing anarchist workers struggle against the rapacious bosses and police and state repression. Attacking property of the oppressors in a symbolic way.

Today, November 15, around noon, the Constitution Anarchist Athenaeum was raided. Our presence guaranteed that the integrity of the premises is preserved. Momentarily it will be closed.

We thank the neighbors and partners for their support and affection.
A big hug to everyone.

[Final note of El Libertario: Those who are not aware, we inform you that the premises raided is a historic site of Argentine anarchism and there is located the most important Library-Archive in Latin America in what corresponds to anarchist documentation of all kinds. From here we express our full solidarity and support to the people of the Athenaeum now facing this repressive onslaught.]

The repressive events that began during the commemoration of May 1st, the International Workers Day in the Plaza Lorea of ​​Buenos Aires in 1909 in which dozens of people were killed or injured by the police are known as the red week. The police, commanded by Ramón L. Falcón fired indiscriminately against the crowd when it was dispersing, and against the general strike that occurred as a result of the massacre and that was the most successful until that time.1

After a few months, with the deadly attack committed by the anarchist militant Simón Radowitzky against the police chief Ramón Lorenzo Falcón (popular justice, according to the libertarian discourse), 2 new repressive events were begun.3

According to testimonies of the time, once finished the speech of an anarchist speaker before an audience of approximately 1500 people (men, women and children), Ramón L. Falcón, who was present next to his police gave the order.

The crowd, which was already dispersing , was attacked by several volleys of rifle fire by a battalion of a hundred uniformed police on horseback. The shooting lasted several minutes, until finally the Avenida de Mayo was clear of the public, which had fled through the side streets. The attack left 80 wounded and 14 dead….3

In the following days, Ramón Falcón ordered the closure of the union premises and the arrest of 16 anarchist leaders of the demonstration.4 Also, from the communication systems that depended on the security forces, the version began to be disseminated… That the events of May 1 were due to a “Russian-Jewish plot” .4

Immediately after the massacre, the anarchist union FORA, which had organized the event, called the general strike during a rally in front of the Casa Rosada.5

At that time, the two trade union confederations, the anarchist and the socialist UGT, had decided to undertake the actions jointly.1

The strike lasted a week and was repressed by the military.5 Despite this, it had a national reach, 1 and for several days the city of Buenos Aires was emptied of both homeless people and transportation services.3

As a result of the rapid response and union of the two major trade union centers, the government established a State of Siege, which was maintained until the following year, 6 as well as signing numerous decrees to expel foreigners from the country.7

There was a massive demonstration for the burial of the dead on May 1; Between 50,000 and 80,000 people gathered in front of the morgue. The delegation requested the delivery of the corpses, a request that was ignored and that caused a new confrontation between the workers and the uniformed police.1

This day there was the explosion of a bomb on a tram.1

After intense negotiations with the government of José Figueroa Alcorta – through the provisional vice president – 8 the general strike was lifted. Some requests of the unions were accepted, among them the request for the release of the detainees from May 1, although not all.

No person responsible or executor of the massacre ever had to answer judicially for their actions.1 This fact was used by the anarchists to justify the assassination of the police chief Ramón Falcón. 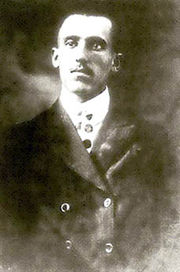 On November 15 of that year, an anarchist militant, Simon Radowitzky, who was a minor when he committed the attack, assassinated the commissar by successfully attacking him with a bomb at the intersection of Callao and Quintana avenues.3

He ended up being imprisoned and tortured in police facilities. During the trial, the prosecutor had requested the death penalty, but he was finally sent to the Ushuaia prison.5

The assassination of Falcón produced a new wave of repression3 that was tainted by episodes of anti-Semitic and xenophobic violence, produced after the condemnatory decision; in addition to the looting and burning of various newspapers, libraries, and socialist and anarchist institutions, as well as institutions such as the Russian Library or the Poale Sion.

The workers’ demonstrations of the time, for their part, went out to shout slogans in favor of Radowitzky, like È morto Ramón Falcón massacratore; evviva Simón Radowitzky vindicatore.3 The anti-Radowitsky demonstrations, in the centennial of independence, chanted the slogan “¡fuera los Russos!” 5

Simon Radowitsky was under aged to be executed but served at least 25 years prison. He emerged unrepentant and fought in an anarchist brigade during the Spanish Revolution.