In addition to recognizing the ethnic and cultural diversity of the country, of which indigenous peoples are part, the Constitution does not grant, but recognizes the original right of our peoples, ending centuries of very serious violations of rights, including mass deaths and forced territorial removals, including during the military regime from 1964 to 1985. As a reference, that territorial right is officially recognized from the Royal Permit of April 1, 1680, still during the Imperial Period, and reiterated in all Brazilian Constitutions, from 1934.

Note that the recognition of the fundamental and original right of indigenous peoples to their traditional lands was given, according to the National Constituent Assembly itself, because, “as for the land, recognizing that for the Indians it means one’s life, it was stipulated that they have the right to permanent possession, and they tried to guarantee their definitive demarcation. “[1] In the end, as the Federal Supreme Court always pointed out:” There is no Indian without land. The relationship with the soil is a characteristic mark of the indigenous essence, because everything that he is, is in the earth and with the earth. 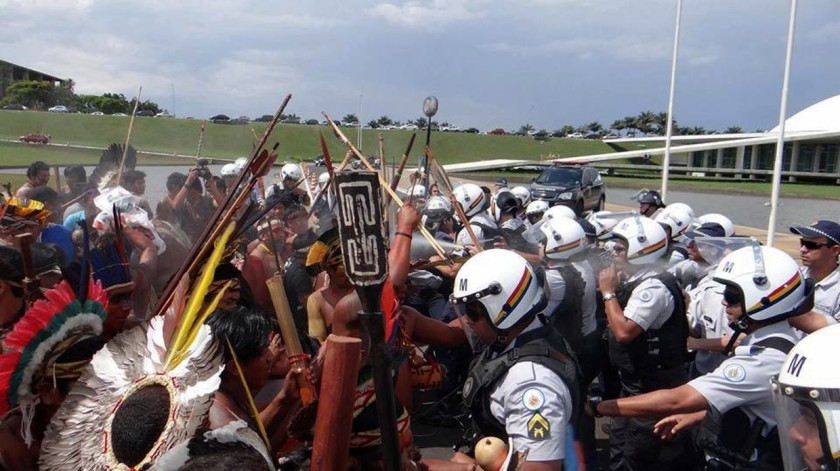 Hence the importance of land for the guarantee of their rights, all linked in one way or another to the land. It is what is extracted from the body of art. 231 of the Constitution. (…) Therefore, there is no point in recognizing rights without securing their territories, identifying and demarcating them. “[2] On the other hand, that is the reason why the Constitution affirms, in § 4.º of article 231, that “the territories referred to in this article are inalienable and unavailable, and the rights over them, imprescriptible.”

The affirmation that our peoples can constitute “new countries in the future”, demonstrates frank ignorance of the related legislation, since the Constitution itself establishes in Article 20 that indigenous territories are the Land of the Union. In addition, for your information, in no country in Latin America, even where the indigenous population is the majority, are there people who think of constituting another country.

The proof is the maturity with which indigenous leaders from around the world agreed with the states that make up the UN, including Brazil, the articles of the Declaration on the Rights of Indigenous Peoples, including its article 46, which states: “Nothing provided in this Declaration shall be interpreted as conferring on a State, people, group or person any right to participate in an activity or to perform an act contrary to the Charter of the United Nations or shall be understood as authorizing or to encourage any action aimed at dismembering or reducing, totally or partially, the territorial integrity or political unity of the States. ”

Since it is a fundamental right provided for by the Federal Constitution and the indigenous territories are the property of the Union, compliance with its demarcation and protection could never be considered harmful or threatening to Brazil.

On the contrary, what undermines national sovereignty, democracy and the interests of the Brazilian people is precisely to violate fundamental rights and duties explicit in the Charter of the Republic and to impose a model of development with irreversible impacts on our traditional peoples and territories. more environmentally preserved in the country.

Brazil is the richest country in the world in tropical forests, water resources, biodiversity, fertile soils and other goods. The preservation of the environment provided by indigenous peoples is a fundamental right of the entire Brazilian society (Article 225 of the Constitution), which is only possible thanks to the harmonious relationship that our peoples maintain millennially with Mother Nature. 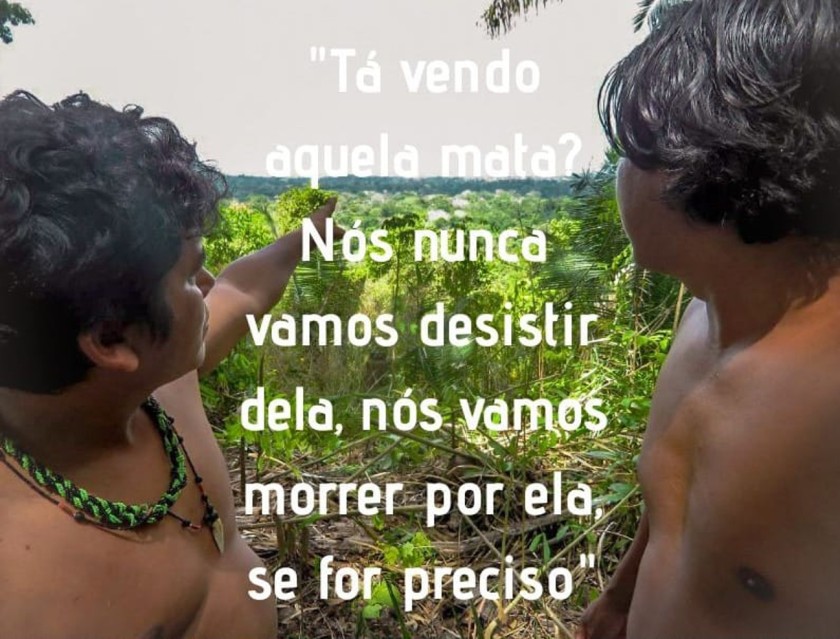 ‘See that jungle.. we’re never going to leave it..we’ll die for it if we have to.’

It is precisely this preservation that allows the guarantee of the quality of healthy life of the Brazilian population and Brazil’s own development, since all economic activities depend on maintaining environmental services provided free of charge by the forests, including the maintenance of our water regime…

Indigenous groups, Amazon’s best land stewards, under federal attack.  According to 2014 data for Legal Amazonia, 59 percent of that year’s illegal deforestation occurred on privately held lands, 27 percent in conservation units, 13 percent in agrarian reform settlements, and a mere 1 percent on indigenous lands — demonstrating that indigenous land stewards are the best at limiting deforestation. Indigenous groups control large reserves in the Amazon and have the constitutional right to more, but land thieves and agribusiness are working to prevent recognition of new indigenous territories — forested territories that, if protected, could sequester a great deal of climate change-causing carbon. ..”The problem is that the Indians have lands these political actors want.” — Márcio Meira, former head of FUNAI, Brazil’s Indian affairs agency.

As the Brazilian and international scientific community has warned, “the removal of forests, threatening rainfall and climate, would not defeat only competitive agriculture; the lack (or excess) of water affects the production of energy, industries, the supply of populations and life in cities. “[3]

That is why we do not admit to being treated as inferior beings, as has resonated in your Excellency’s statements. We are only different, being an obligation of the federal government according to the Constitution, to respect our “social organization, customs, languages, beliefs and traditions” (article 231 of the Constitution). We therefore repudiate his pejorative and reduced understanding of considering ourselves like animals in zoos. 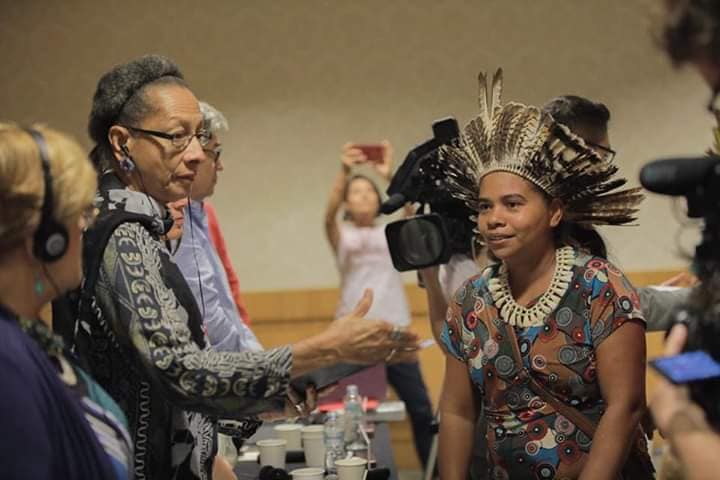 The development model that we defend and implement in our lands is also different from what your Excellency says, because we seek to strengthen the sustainability and environmental management of our territories. We reject any type of predatory exploration of natural assets and we demand that our knowledge and concepts of good living be respected.

Instead of attacking and defaming our peoples, Your Excellency has the obligation, by constitutional imposition, to execute public policies that do justice to the level of democracy reached by Brazil, ensuring the full and unrestricted compliance of the Federal Constitution and international treaties. ratified by Brazil. For that, in line with the constitutional and legal mandates applicable to the federal government, we strive for attention to the following proposals and demands of our peoples: 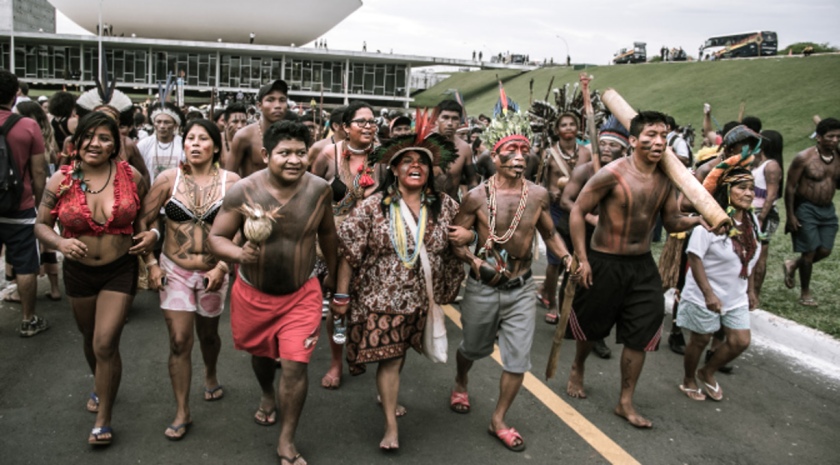 Keep FUNAI linked to the Ministry of Justice, and strengthened, that is, with the necessary budget for the fulfillment of its institutional mission to promote the rights of our peoples, mainly in relation to the demarcation and protection of indigenous territories.

‘we are ALL Guarani-Kaiowá… Struggle and Resistance’

This being what we had to communicate, we await an answer.

Articulation of the Indigenous Peoples of Brazil – APIB

”Bolsonaro is a former Army officer who has praised Brazil’s former military dictatorship, spoken in favor of torture and threatened to destroy, imprison or banish his political opponents. He has also encouraged the police to kill suspected drug dealers, and once told a female lawmaker she was too ugly to rape. Noam Chomsky calls Bolsonaro a “disaster for Brazil“.

10 thoughts on “Indigenous peoples to Bolsonaro: “We Refuse to be Treated as Inferior beings””