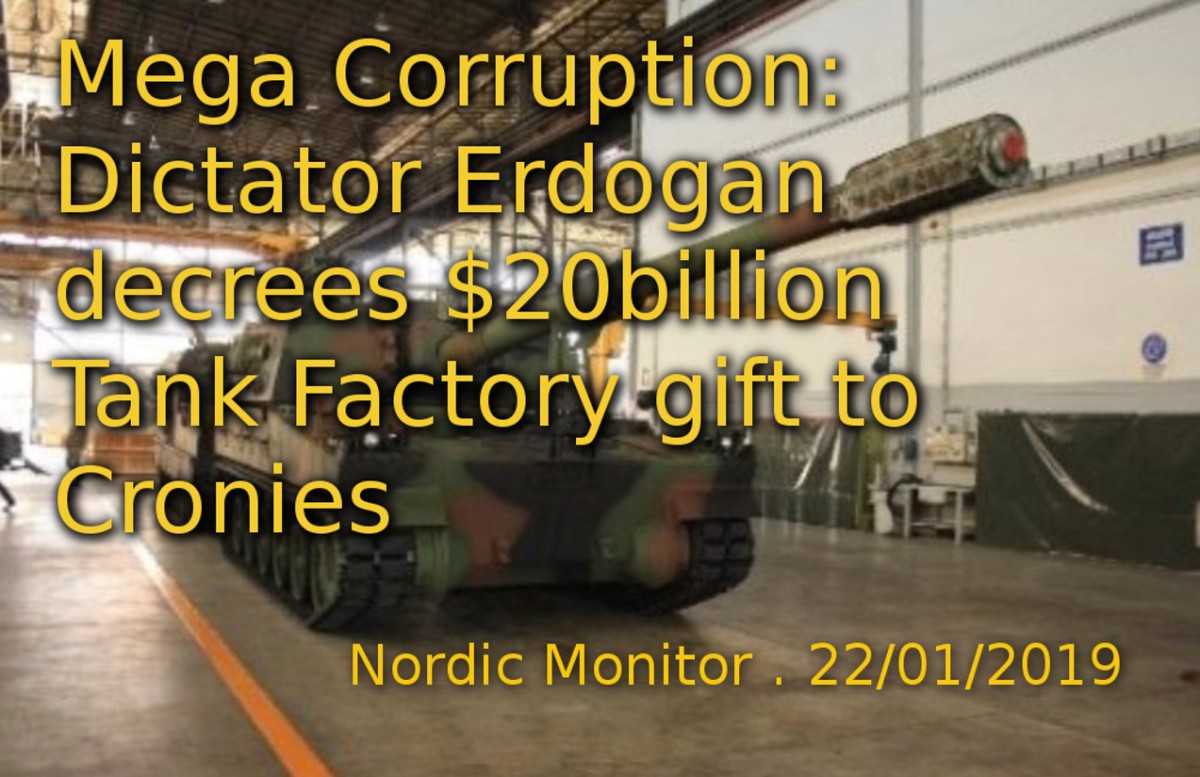 How nice to have total power! Here’s yet another little scandal to add to the 1001-crimes-of-adolf-erdogan. Not this time locking up tens of thousands or  massacring the Kurds‎, but adding up to a fine sum of $20,000,000,000 nonetheless.

The government of Turkish President Recep Tayyip Erdoğan rushed a financial agreement between Turkey and Qatar through Parliament for approval ahead of his decision to turn over a $20 billion tank and pallet factory to a company run jointly by his associates and the Qatari army.

The deal, the avoidance of double taxation agreement, came just in the nick of time before the Erdoğan government presented a multibillion-dollar national tank factory on a silver platter to Turkish-Qatari armored vehicle manufacturer BMC, a company run by Ethem Sancak, a member of the MKYK executive body of the ruling Justice and Development Party (AKP).

Rumor in Ankara circles has it that Erdoğan is the real owner of BMC and Sancak is merely a caretaker looking after the Turkish president’s business interests. The Öztürk family, known to have mafia links to Galip Öztürk, a convicted murderer and head of an organized crime network, is seen close to the Turkish president.

According to Nordic Monitor’s investigation of the documents it obtained, the Qatar-Turkey agreement was submitted to Parliament on Dec. 5, 2018, only three days after the Turkish president addressed a defense summit in Ankara where he said the public and private sectors, from finance to human resources and technology, would collectively take part in the defense industry.

On the same day Erdoğan submitted the Qatar agreement to Parliament, Mustafa Şentop, a senior member of Erdoğan’s AKP and deputy parliament speaker, referred the agreement to the Foreign Affairs Commission when he was supposed to send it to the Trade and Industry Commission as the main body to look into the text as well as the Planning and Budget Commission for a financial impact assessment. Şentop, a law professor by trade, knew how he should have handled the agreement under parliamentary procedures but was on the clock and needed to rush it under orders from Erdoğan.

The Foreign Affairs Commission could have very well reviewed the text as a subsidiary body, not the main commission, in line with established procedures in Parliament. Yet the designation of a single commission to review the text was intended to fast-track the process according to the timeline set by President Erdoğan.

A day after the taxation agreement was presented to Parliament, the Foreign Affairs Commission convened to debate 10 international agreements that were already on the agenda. The Qatar agreement was not among them.

Invoking his powers as chairman, which is rarely used and only in exceptional cases, Volkan Bozkır, the head of the Foreign Affairs Commission, offered a vote on a motion to put the text of the Qatar agreement on the commission’s agenda. The motion was endorsed by Asuman Erdoğan and Radiye Sezer Katırcıoğlu, two Islamist politicians from the AKP.

The move drew criticism from members of opposition parties who said they did not have advance notice and did not have time to review the text of the agreement. Bozkır claimed the text had been approved before but could not clear the General Assembly because of snap polls and that there was no need to debate the text.

He also said Turkey’s national interests were at stake and that the commission needed to push it through urgently without explaining what those interests that the Turkish government was supposed to protect were. In the end, the motion was passed and the agreement was approved without effectively debating any of its 30 articles.

It also remains an open question as to why Turkey needed to sign a new double taxation agreement with Qatar when there was already a double taxation agreement signed on Dec. 25, 2001 that began implementation on Jan. 1, 2009. Ömer Gücük, a Turkish diplomat who ran the department on multilateral economic relations at the Turkish Foreign Ministry, simply said there was a need to update the agreement without providing specifics and without explaining why. With the new agreement in effect, the 2001 deal would be null and void, he added.

As the saying goes, the devil is in details. The only real difference between the old and new agreements was a change in tax rates to the benefit of Erdoğan and his Turkish and Qatari associates.

The new provisions on the exchange of information from both sides were also designed to bring more secrecy to trade deals. New articles were also added to the mutual agreement procedure (MAP) on arbitration in the event of disputes, a standard application in such agreements under new guidelines from the Organisation for Economic Co-operation and Development (OECD).

After the agreement cleared the commission and while it was still awaiting a vote in the General Assembly, Erdoğan issued an executive decree on Dec. 19 announcing the privatization of the tank factory, which was located on a valuable piece of land measuring 1.8 million square meters. The privatization meant the government would hand over the operating rights to a private company for 25 years, with the entire process to be completed by the end of 2019. The decision was published in the Official Gazette the next day.

Erdoğan issued an executive decree on Dec. 19 announcing the privatization of the tank factory.

The agreement was approved by the General Assembly on Dec. 25, 2018, 10 days after it cleared the commission, as Law No. 7158. It was sent to the president for his signature the next day. Erdoğan signed it on Dec. 27 and sent the agreement to the Official Gazette for publication in the registry. On Friday Dec. 28, 2018 the agreement was published in the gazette, making it law in Turkey. On Jan. 13, Erdoğan announced the decision to hand over the factory to BMC without even bothering to wait for the end of the year.

The tank and pallet factory, established in 1975 and operated under the 1st Central Maintenance Factory Management in the Land Forces Command, manufactured artillery, howitzers, ammunition carriers and tracks for tanks and other military carriers.

The factory was also modernizing the Leopard 1, 2 and other tanks. Roughly 1,000 workers were employed at the factory, and unions as well as opposition parties expressed concern over their job security after the transfer to BMC.

Erdoğan dismissed the criticism, claiming that the privatization would lead to the employment of some 10,000 people and attract billions of dollars from Qatar and other countries.

In addition to the Turkish partners, Nordic Monitor’s investigation has also identified Qatari nationals who have shares in BMC and serve on the board. According to registry data, Abdulla Hamad M.O. Al-Nabet, Mohd Jaber M.J. Lubdah, Mohammed A.S.H. Al-Othman and N.Hassan N.A.Al-Naimi were listed as board members of BMC. The following Qatar nationals were previously listed on the board: Mohd Khalifa O. Al-Kuwari, T.A.Rahman Sh. A. Al-Kuwari, Nasser Hamad Aa Al-Sulaiti, Hemaid A.Kareem N.Al-Hajri and Yousuf Ahmad S. Almannai.

Current and former Qatari shareholders of the BMC firm.

The privatization of the tank factory is in fact in conflict with the existing laws of Turkey, specifically with Privatization Law No. 4046 and the law on the establishment of the Defense Ministry. Since the tank factory is owned by the Turkish military, it has national security implications and cannot be turned over to foreign nationals.

Since the rule of law has ceased to exist in Turkey, nobody can successfully challenge this privatization with the judiciary, which is completely subordinated to Erdoğan’s rule.