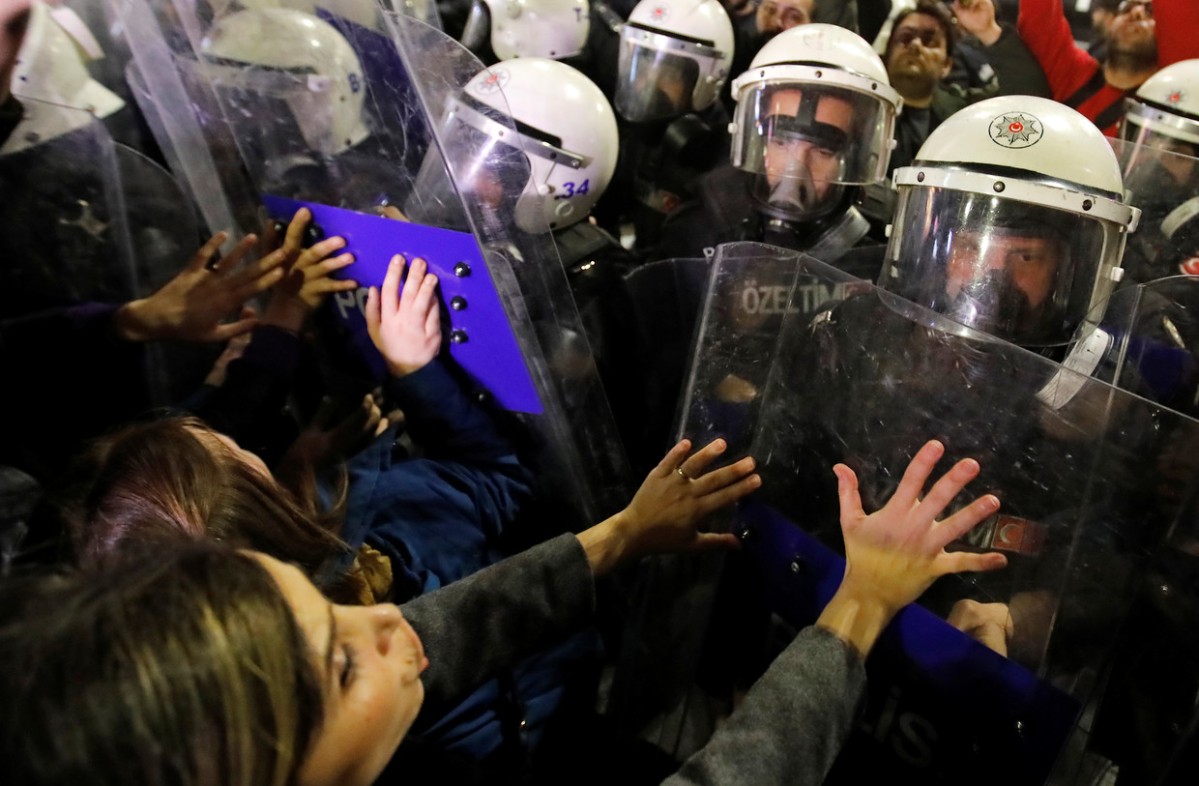 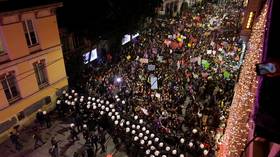 The “Feminist Night March” in Istanbul was one of the many demonstrations held on Friday across Turkey, demanding equality and an end to the historic oppression of women.

Demonstrators responded to the crackdown by chanting anti-police slogans, and telling riot officers to find another profession, local media reported.

One of the chants was “police, open the way, the streets belong to us!”

Earlier in the day, female students from Istanbul University held a march as well.

Istanbul police fired tear gas Friday at thousands of women who took to the city’s central avenue on International Women’s Day in defiance of a protest ban to demand greater rights and denounce violence.

Security forces in riot gear pushed the crowds of women — some wearing colourful wigs and masks — at the entrance to the city’s main pedestrianised shopping street Istiklal Avenue, an AFP correspondent reported.

Police then used tear gas on the marchers and menaced them with dogs, causing many protesters to flee onto side streets.

Ahead of the protest the area was flooded with police who set up cordons around the central Taksim Square, while many local shops were closed.

One woman, called Ulker, speaking to AFP from behind a barrier, said: “Here is the bitter truth: There is a system, there is a state that is scared of us. I condemn this.”

Thousands of demonstrators were eventually allowed into a small part of the avenue to stage the protest.

They unfurled banners that read “Feminist revolt against male violence, and poverty”, and “I was born free and I will live free.”

The crowds then became trapped between two security cordons and were subsequently dispersed by the police using tear gas.

Female students at Istanbul University held a manifestation in front of the university’s Beyazıt Gate due to #InternationalWomensDay. #dokuz8/@ayseegulkaragozpic.twitter.com/5SJzY6F3yQ

The issue was highlighted on Thursday when Turkish pop singer Sila went to court to accuse her boyfriend Ahmet Kural, a famous actor, of beating her.

The case was a rare instance of a celebrity breaking the silence that surrounds abuse in this conservative society in which traditional, patriarchal attitudes are dominant.

“As you know in Turkey violence against women is very high. The government is doing nothing to stop it. That’s all we can do: to come here and speak up,” one protester, Gulsah, on Istiklal Avenue said.

In the capital Ankara, hundreds of people took part in a smaller Women’s Day rallies, whistling, cheering and clapping as they walked and shouting “we will not be quiet.”

Some chanted: “Men are killing and the state is protecting killers.”

Large scale protests are rare events in Turkey since mass 2013 anti-government rallies, which were seen as a major challenge to Erdogan’s government.