Luis Fernando Sotelo, anarchist political prisoner in Mexico City, is set to be released on July 12th after 4 years and eight months in prison.

Luis Fernando Sotelo Zambrano was arrested alongside Sergio Pérez Landero on November 5, 2014, near University City in Mexico City, following the Third Global Day of Action for Ayotzinapa. During the demonstration, a Metrobús station and a Metrobús (a rapid transit bus service) were burned.

The following day, Sergio was released for lack of evidence, while 20-year-old student Luis Fernando was charged with several major crimes and sent to South Prison (Reclusorio Sur) in Mexico City where for a time he was held in solitary confinement. 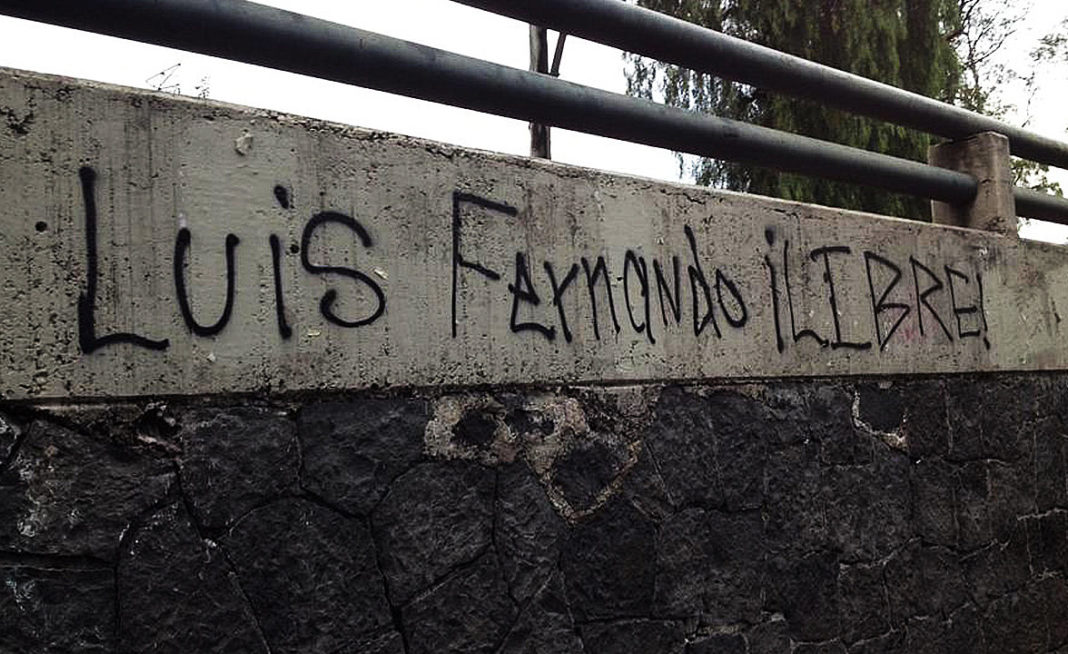 Luis Fernando was involved in various political projects, including the Ollin Meztli Collective, the ik’ otik Cooperative, the Network Against Repression and for Solidarity, and is an adherent to the Zapatista’s Sixth Declaration.

In 2016, Sotelo and several other prisoners participated in a hunger strike in solidarity with the prison strike underway in the United States against prison slavery and in support of the revolts against the killing of African-Americans by police.

Statement by Campaign for the Freedom of Luis Fernando Sotelo:

To the Zapatista Army of National Liberation

To the National and International Sixth

To the Compañerxs in Solidarity

Since November 5th, 2014, for more than four years, we have received solidarity from you all, to accompany the struggle for the freedom of Luis Fernando Sotelo Zambrano. The possibility of having Luis in the streets with us is possible thanks to the effort of the legal-political struggle that we have carried out against state repression.

Since November 5th when Luis was arbitrarily detained, even as the repression beat us again and again, Los Otros Abogadoz and Luis, you all, us, we never gave up. Each time we resisted, with a legal appeal, a protest and/ or the closing of the courthouse. In consequence, his sentence was reduced from long-term confinement that sought to rob him of his entire life, to his upcoming release.

To all of those who were there during these four years and eight months with your expressions of solidarity; the mobilizations, publications, economic donations, letters, music, food, forums that you all organized, coffee, honey, fanzines, psychological support, medical support, opening spaces to us in your community assemblies, “encanto del condón,” from the other side of the Atlantic, with your documentaries, engravings, hunger strikes, paintings, serigraphy, hand crafts, organic products, dance…to you all we thank you infinitely. With what you put together to accompany and sustain this struggle, we learned from your solidarity in practice and not only in words.

To those who were not there but who took the stage, who took the microphone, who waved the flag “our prisoners”, who spoke the name of Luis…to you all we say, thank you because we learned who are and who aren’t our compañerxs.

Today, after all of this, we inform you all that our compañero Luis Fernando Sotelo will be released.

WE CALL FOR A RALLY ON JULY 12TH IN THE SOUTHERN PRISON OF MEXICO CITY TO THOSE WHO WANT TO RECEIVE SOTELO AS HE IS RELEASED.

The struggle for freedom does not end with the freedom of Luis. There exists many more imprisoned compañerxs and we are clear that we can only build another world when we are all free!

Campaign for the Freedom of Luis Fernando Sotelo