note: we are against the religious/fascist Jewish state, but NOT Jewish people!

At least 40 protesters who took part in a “Jews Against ICE” protest at an Amazon Books store along 34th Street in Manhattan were arrested by police on Sunday, August 11, coinciding with the Jewish fast day of Tisha B’Av. 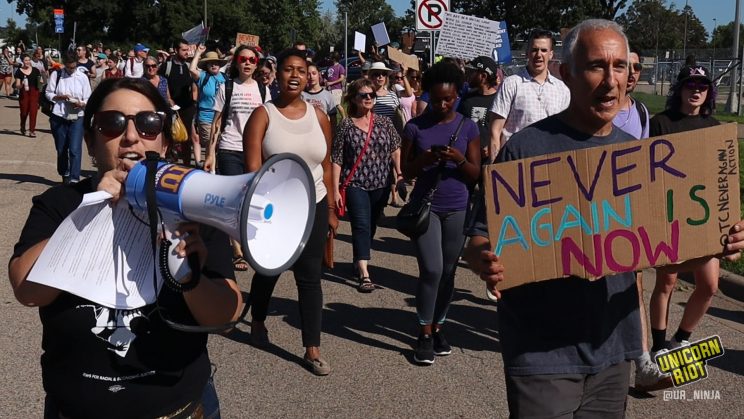 This footage, livestreamed for the Jews for Racial and Economic Justice organization by author and activist Abby Stein, shows the scene at the store where more than 1,000 demonstrators spoke out against detention centers in the United States, made speeches, sang songs and held banners with slogans including “Never again means never again,” drawing a comparison between the events of the Holocaust and the current immigration situation in the US.

New York Police Department officers can be seen escorting arrested protesters into an MTA bus, which was reportedly commandeered due to the large number of arrestees.

The protest in New York coincided with a number of similar demonstrations across the country on Sunday, but Amazon’s brick-and-mortar Midtown store was chosen as a protest site due to the technology company allegedly hosting database software enabling ICE to document and detain immigrants, according to reports from PIX11 and Haaretz.

St. Paul, MN – For over three hours, hundreds of ‘Never Again’ protesters blockaded traffic around Minnesota’s Federal Immigrant Customs Enforcement (ICE) building on Tuesday, July 30. The protest called for the closing of ICE border detention centers, which protesters deem as concentration camps. 27 people were cited for unlawful assembly in an orchestrated arrest starting at 7 p.m., when their permit expired.

Unicorn Riot was live for the duration of the action.

Led by Twin Cities Jewish and Immigrant community members, several street blockades of humans and cars were deployed to block traffic on the streets. Meanwhile others rallied at the main entrance to the Bishop Henry Whipple Federal building in St. Paul, Minnesota.

Young Jewish protesters began the blockades by holding hands and walking to the exits surrounding the Whipple building. The exits also include Metro Transit Park & Ride parking lots. At the east and the west side entrances to the building, two cars reinforced the human chains.

At this time commuters were arriving from the Light Rail to get to their cars in the Park & Ride lots, and others were leaving work from the Whipple building and other nearby buildings. The handful of blockades held their ground for the duration of Tuesday’s rush hour traffic. 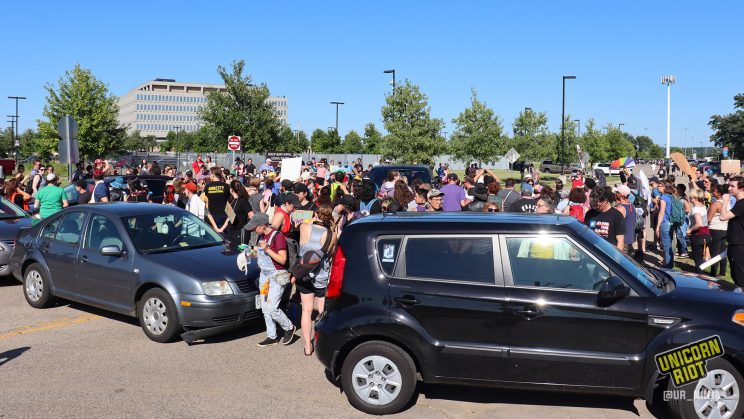 Near the Fort Snelling Light Rail station there was several reports incidents of cars plowing through the protesters. The atmosphere stayed semi-tense with a standoff at the blockade that lasted for hours.

One man yelled “Trump baby. Trump all the way! Build the fucking wall” from his large truck. He had positioned his truck just feet from the blockade and continually blared his horn. He stayed in direct confrontation with the protesters for hours. 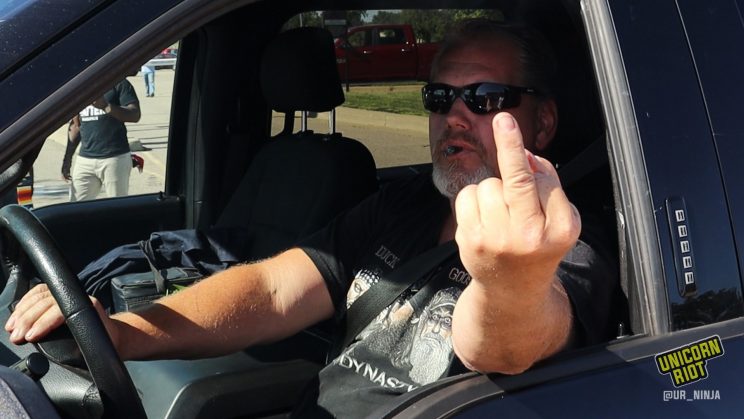 At the main entrance to the Whipple building the street blockade consisted of a human chain and two cars. Protesters were accompanied by the marching band collective Unlawful Assembly. 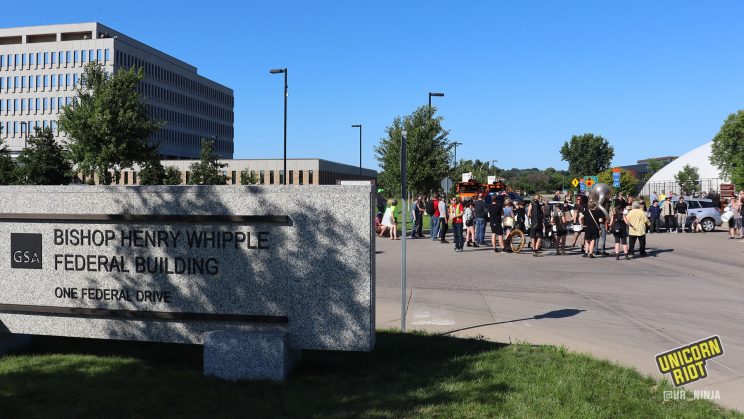 Jewish prayers, songs, and chants of solidarity with immigrants alongside demands to close the camps emanated continuously from the participants of the handful of human chains and their accomplices on the sidewalks and in the streets.

At the start of the rally at the Whipple building entrance, Twin Cities music artist Mixie DBest spoke via telephone with her husband, who is locked up in ICE detention.

Her husband and the father of her three children, John Bing III, is the artist named Sota Smoov. He came to the United States when he was three after his family fled the civil war in Liberia.

“This is not about protecting people. They’re splitting apart families. This is spiritual and physical warfare. They want Brown and Black people to be separated and they want the white supremacists to win.” – Mixie DBest 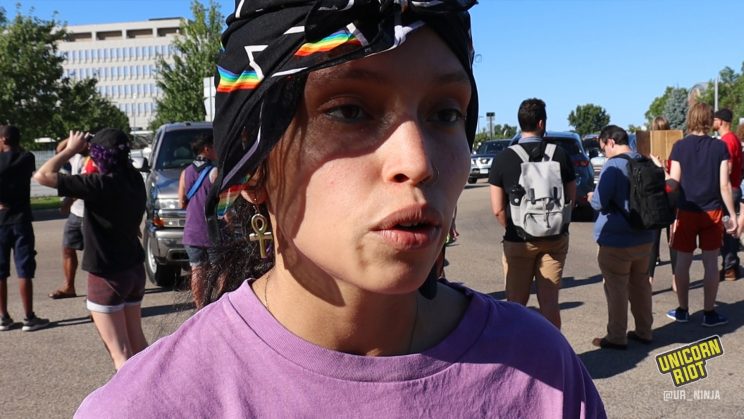 Sota has been locked up in Sherburne County Jail since June 6, 2019. ICE pays Sherburne County $100 each day per inmate. Sherburne reserves up to 300 beds a day for immigration detainees and wants more beds. If all the beds were occupied the county would be receiving over $30,000 per day from ICE.

Mixie told us that in regards to the “jail renting out to ICE,” it’s a “business” to the government and part of a deep-set game of divide and control. 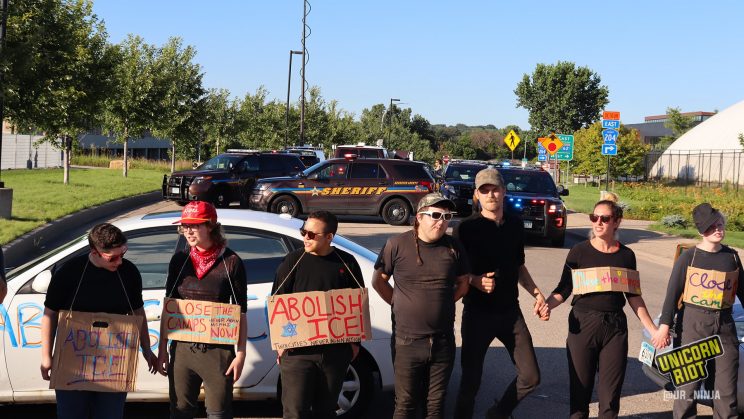 Unicorn Riot spoke with Susan Kikuchi, a Japanese-American whose family was interned in American concentration camps at Tule Lake and Minidoka during World War II.

Kikuchi said that overall she would like to see the “ending [of] mass incarceration in all of its forms.” It’s “very personal,” Kikuchi said; “‘never again’ means never again for anyone.”

“There’s concentration camps on the border right now … there’s kids in those camps in those cages and we wanna get them out. That’s why we’re here.” – Susan Kikuchi 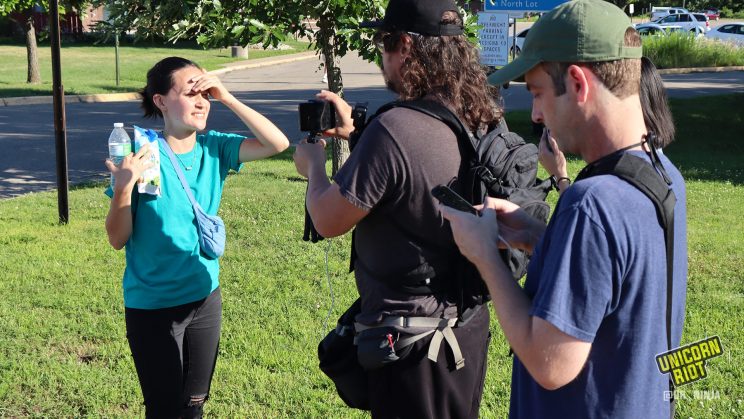 The ‘Never Again‘ movement gaining steam this summer is organized by young Jewish people who have been activated by the separation of families and the detention centers at the border. They say they were taught the story of the Holocaust, and taught to ‘never again’ let that happen. Standing up in protest of ICE is a way for them to put those lessons into action.

“We can’t just stand by and watch as this happens. We know that genocide happens in stages … We’ve seen this before, and if we were to stand by we’d be bad Jews.” – Jewish ‘Never Again’ protester cited for unlawful assembly

At the ‘Stop Separating Families’ march one month prior, a descendant of refugees told Unicorn Riot it made sense that they would demand others’ right to sanctuary.

“We were here to disrupt business as usual. Whipple is a deportation court and we are showing up here until the detention camps at the border are closed, until all immigrants, refugees, and asylum seekers have permanent protection and until ICE is defunded.” – ‘Never Again’ organizer

As the crisis at the border continues and the number of children locked up increases, it seems the 2018 movement to Occupy ICE has grown new wings with the Never Again actions led by the Jewish community. More ‘Never Again is Now’ actions are planned across the country.

Unicorn Riot’s Coverage of the Sanctuary Movement and Immigration: