[ for folks who are unaware Eric is an anarchist and anti-fascist prisoner who was sentenced to 10 years for an attempted arson, an action in solidarity with the Ferguson uprising in Kansas city. Throwing two Molotov cocktails into a state representatives office at night time. He has since remained outspoken against the prison system. Exposing abuses and standing tall in the face of constant attacks and oppression]

In august of last year Eric was dragged into a broom closet and attacked by Lt Wilcox at FCI Florence. Attacked because he is an anarchist and anti-fascist. It was timed to line up with the surgery for his wifes cancer. He was subsequently tortured and abused and never checked out medically despite being kicked in the head for 5 plus minutes. And tied to a 4 point restraint for 8 hours, having to urinate himself resulting in nerve damage to his wrists.

Since the indictment was filed (in May but conveniently they wait for the painful anniversary to serve indictment) he has been attacked twice at the orchestration of the BOP. Once being blatantly led into a fenced in area where a fash was waiting to attack while the guards watched and by putting someone who was known to have attacked the last cellmates in his cell. Not even talking about all of the other attempts.

Since the attack he was unable to see or talk to his family for a year, kept in segregation, not allowed even the most basic needs as the right to read a book, have a photo. Denied medical care as he begged for help August 1st, the day before his birthday. His words coming out in slurs because the whole left side of his body… paralyzed. Cognitive and confusion. 29 days without a scan, 29 days… every day further from the potential ability to minimize potentially life changing damage. Being held under the custody of the bop while fighting a bop case. Being held in a prison in which an adult man threatened their daughter 2 years before, a man who had access. A prison where this man still works. A prison where guards currently fuck with him by asking where his daughters go to school over and over. Despite the fact the BOP has attempted to attack and intimidate, orchestrating these attack by use of white supremacists. 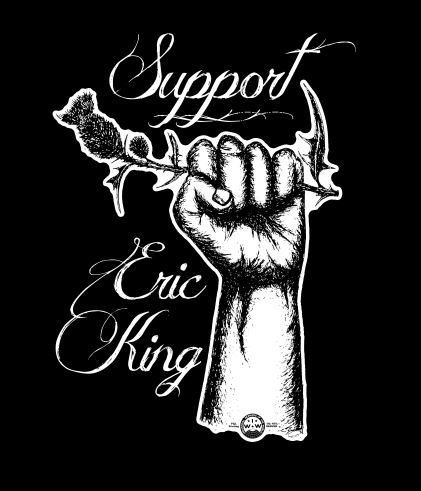 Eric was indicted yesterday for his own assault. He faces up to 20 years in prison for being attacked and beaten.By a guard who feels safe dragging prisoners off camera and attacking. A guard who is known by the PD office for doing this and then destroying lives. Being brought up in the federal court system, a court system that is built to crush as a much more effective machine than any other in our country. Where only 2% go to trial bc the feds dont take a case they cant win. Fewer than 1% going on to win their case. Things are looking grim.

We need folks to donate, hold fundraisers, we need to be prepared

We need folks to show up at court appearances. We need to show the state we wont let them bury our friend. File court dates same day to try to ensure folks cant be there. We let them do this to Eric once already. We let the state convict him of attempted arson and give him 10 years in federal prison. Where they are trying to make sure he never walks out those doors. Is buried at the ADX.

With love and rage

Eric on the final straw podcast

One thought on “Eric King beaten up: facing up to 20 more years in prison”