In Dêrik, the people protested the Turkish state’s invasion of northern and eastern Syria. People marched chanting slogans on the streets of the city.

While the attacks continued around the city of Sêrikaniyê with mortars, Sêrikaniyê Military Assembly forces responded. There are thousands of civilians in the city.

A 6-year-old boy in the village of Sê Girka in Qamishlo was wounded during the attack of the occupying Turkish state. In the same area, the Turkish army shot a vehicle belonging to civilians.

Responding to the Turkish state’s occupation attack, HDP co-chair Sezai Temelli said in a statement, “Let us give voice to Rojava. Let’s speak out against this war against the Kurdish people”.

Ready for Resistance-Call to Day X: No war on Northern Syria 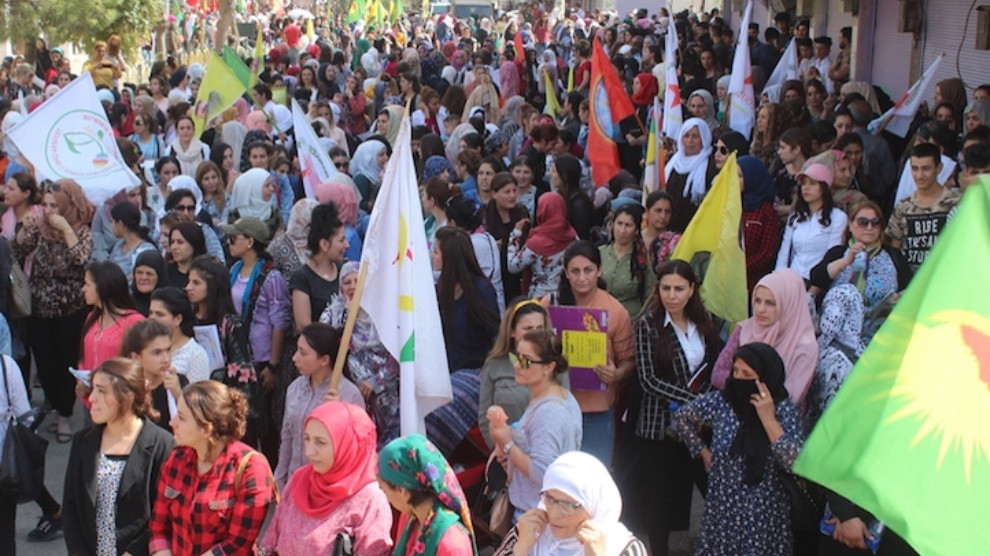 The local councils of various towns and areas have held huge protests and promised to resist Turkish fascism to their last breath.

Trump gave in to Erdogan with a silly promise to withdraw, then stated vaguely that there are limits, with some macho threats. The key limit may be whether he has permission to use the airspace which in NE Syria is controlled by the USA.

Without the bombing permission his gigantic army can still roll south, but might take heavy casualties. In the Afrin Invasion this airspace permission was granted by Russia in exchange for an evil deal, (making Putin a mass war criminal) and the place was carpet bombed for days before the invasion began. 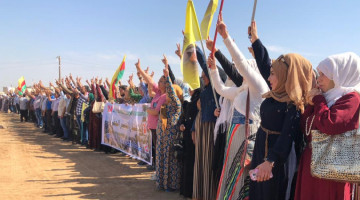 Trump did not deny giving bombing permission, but its possible with his Generals and many countries worldwide against the invasion, (including France and the UK which are still nominally in the Coalition), that airspace permission could be withheld.

Then Erdogan might go ahead anyway..( it’s hard to see the US shooting down a Turkish jet, which is also NATO and could even be sharing the same Incirlik airbase!).. or could limit the invasion for now to the fake ”safe area” along the border.

In any case the invasion is going ahead, despite the unanimous rejection by all communities, Arab, Syriac, Christian, etc not just Kurdish people in the local towns, where internal refugees have  flocked back as Isis was driven out and who seem happier to live in a democratic, horizontally organised democracy than under Erdogan, ISIS, Al Qaeda or Assad.

Demonstrations against Turkey all around Europe

The SDF coalition of militias, of Rojava/Autonomous Administration(AA) though 70,000 strong, are facing a giant 639,551.[8] strong modern NATO army , led by an openly fascist, racist, misogynist and mass murdering expansionist regime, as being illustrated daily  in Afrin,  which could roll over them in days.

The SDF has very few armoured vehicles, tanks or heavy artillery and of course no air force while Turkey is the second biggest NATO force with tens of thousands, now poised to take over Rojava and northern Syria.

Therefore the SDF will probably go for a guerilla resistance from the beginning, as any set battles in the open countryside could be suicidal.

Call for resistance against Turkey’s plan to invade Rojava

Free Women’s Movement (TJA) stated that an imminent military operation against Northeast Syria by the AKP-MHP coalition, which remains standing with war and repression, is an effort to bring itself into existence over attacks against Kurdish achievements and to cover its collapsing domestic policies with fascism and militarism.

TJA called upon all circles of society to stand against the AKP-MHP government’s policies for deepening the conflict.

Peoples’ Democratic Party (HDP) Central Executive Board stressed that the AKP-MHP government putting a new military aggression against North and East Syria on the agenda was an extremely dangerous and wrong step.

HDP warned that the destruction to be caused by an intervention of this kind and population engineering would be categorized as a crime against humanity before international law.

The party pointed out that in addition to the Kurds, Arabs, Turkmens, Syriacs, Armenians and Yazidis in the region were also under a great threat.

HDP called on the forces of peace and democracy in Turkey to take an effective and determined stance against the AKP-MHP alliance that is trying to consolidate its destabilized rule;  “Such a military intervention means more repression on the society in Turkey, more financial burdens, poverty, a deepening crisis, widespread lawlessness and the lack of democracy.

With this likely intervention, Turkey is being dragged into a dangerous and deep trap, an adventure with no boundaries. We can stop this together.”

The Socialist Party of the Oppressed (ESP) warned against “fascist Turkish state threat of invasion against the Rojava Revolution that gained its right to existence with a battle based on self defense against ISIS mercenaries, the reactionary states in the region and imperialist forces”.

ESP called on Turkish workers and laborers to reclaim their honor and to oppose the colonial war. 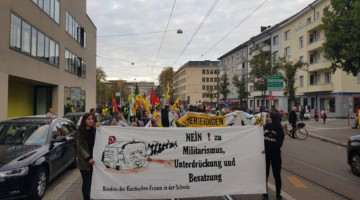 SYPG-JKŞ-CKŞ pointed out that this operation cannot be considered or started independently from international imperialist alliance relationships.

The statement by SYPG-JKŞ-CKŞ said; “It is not really surprising that the US which was in a tactical alliance with SDF at first, now approves the Turkish state’s occupation campaign against North and East Syria. The US, which acts in line with its own international military and economic interests, connives at the massacre of the region’s peoples by Turkish invasion today, an act that actually corresponds its essence. 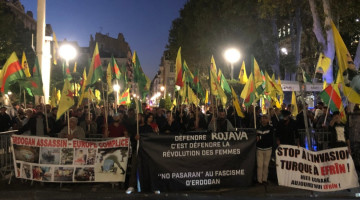 Demos against Turkish threats all over Europe

They are afraid because Rojava Revolution is the door to the freedom of all peoples. Alongside the self defense forces and mechanisms of the people, we will be resisting the occupation operations of the Turkish state, colonial regional states and international imperialist forces to the last drop of blood.

To keep silent is to be a party to this crime. All streets should be turned into areas of resistance against invasion.”

7 thoughts on “Urgent Calls for Resistance against Turkish Invasion of Rojava: Live Updates”