Follow RT on Julian Assange’s extradition to the US would sound the death knell for both investigative journalism and the rule of law, Pink Floyd co-founder Roger Waters told RT ahead of a march organized in support of the WikiLeaks publisher.

Campaigners have projected the footage of an American airstrike on Iraqi civilians, originally exposed by WikiLeaks, onto the parliament building in London, to protest against the proposed extradition to the US of Julian Assange. Clips from the infamous 2007 footage were projected onto Westminster Palace, where both houses of parliament are located.

The same video was projected on the wall of the Belmarsh maximum security prison in London, where the WikiLeaks co-founder is awaiting his US extradition trial. The images on the buildings’ walls included photos of the activist along with slogans like ‘Don’t extradite Assange’ and ‘Journalism is not a crime

With his extradition proceedings set to begin Monday, Assange faces 175 years in an American prison cell under the Espionage Act for his work with WikiLeaks, which has published thousands of pages of classified government documents since its founding – including evidence of US war crimes. But with the UK government intent to “feed him to the wolves,” Waters said Assange’s case has made a mockery of the law.

“If they extradite Julian and kill him in America, it is the death knell of jurisprudence in this country,” he said. “[Assange’s case] has nothing to do with the law, it’s not a legal proceeding at all. It’s a joke and it’s disgusting… It makes me ashamed to be English.” Also on rt.com WATCH harrowing footage of 2007 Baghdad killings projected onto UK parliament wall in protest against Assange’s extradition

Assange would never receive anything close to a fair trial in the US, the rock star added, noting that the UK authorities are already “breaking the law to try to get him there.”

“Julian Assange in America getting a fair trial? Zero chance,” he said. “He didn’t commit any espionage, he reported on things that were going on – they happened to be war crimes.”

There’s an extradition treaty between the UK and the United States, which has a number of articles. The fourth article says that no extradition proceeding should even start if there is a political motivation to it. This isn’t political? Of course it is. 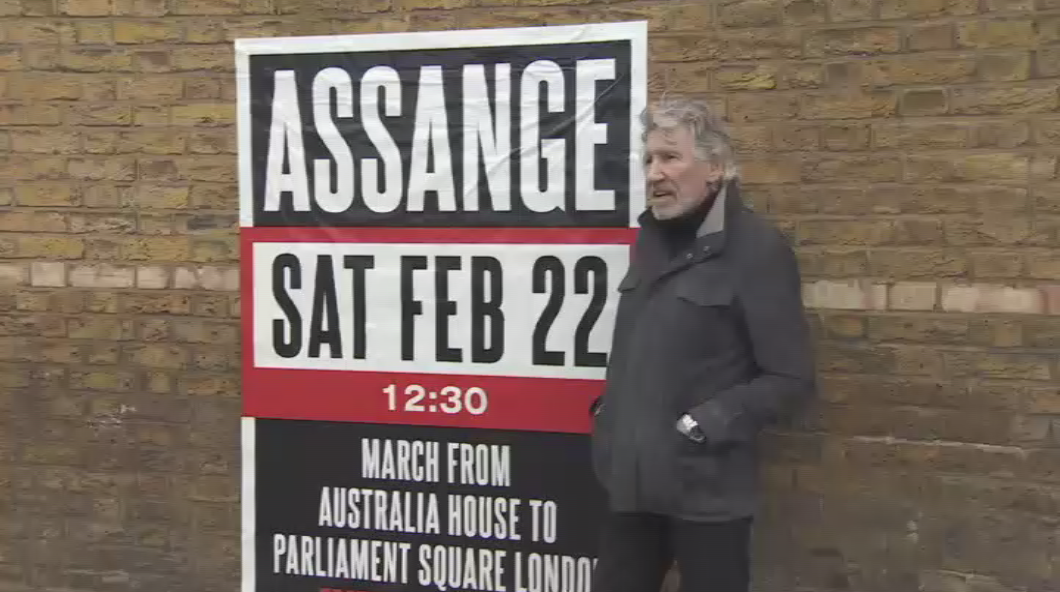 Waters performed at a protest march on Saturday afternoon in London, organized to voice support for Assange and demand his release from the Belmarsh maximum security prison, where the anti-secrecy activist was locked up after his arrest at the Ecuadorian Embassy in April. His health has steadily deteriorated since.

“He’s been in prison for seven years now, in the Ecuadorian Embassy and now in this maximum security place in Belmarsh,” where “they’ve almost killed him,” Waters said. “He’s really sick… Julian could hardly remember his own name.”

Also on rt.com ‘Journalism is not a crime’: Australian MP says charges against Assange must be dropped after visiting him in UK prison

Despite calls from Australian lawmakers for UK Prime Minister Boris Johnson to block Assange’s extradition earlier this week, Waters said the PM is much too beholden to Washington to follow through on the request.

Boris? Wouldn’t it be wonderful if we found even one iota of British bulldog in Boris Johnson, but unfortunately he is 100 percent American poodle.

“I suspect [Jonhson] will stay in his kennel and do what he’s bloody well told by his masters across the Atlantic,” he said.

Ultimately, Waters concluded, the persecution of Julian Assange is a “way of exerting… authority, so that nobody will report on anything that’s inconvenient to power ever again.”

Any reporting on wrongdoing by any armed forces anywhere in the world, I think it’s a moral obligation and duty [for journalists], and it’s a duty of the government to do something about it, not try and kill them!

Also on rt.com ‘Doctors for Assange’ worry he may die in UK prison having ‘effectively been tortured to death’

One thought on “‘Disgusting joke’ & mockery of the law: Julian Assange has ZERO chance of fair trial in US, Roger Waters”