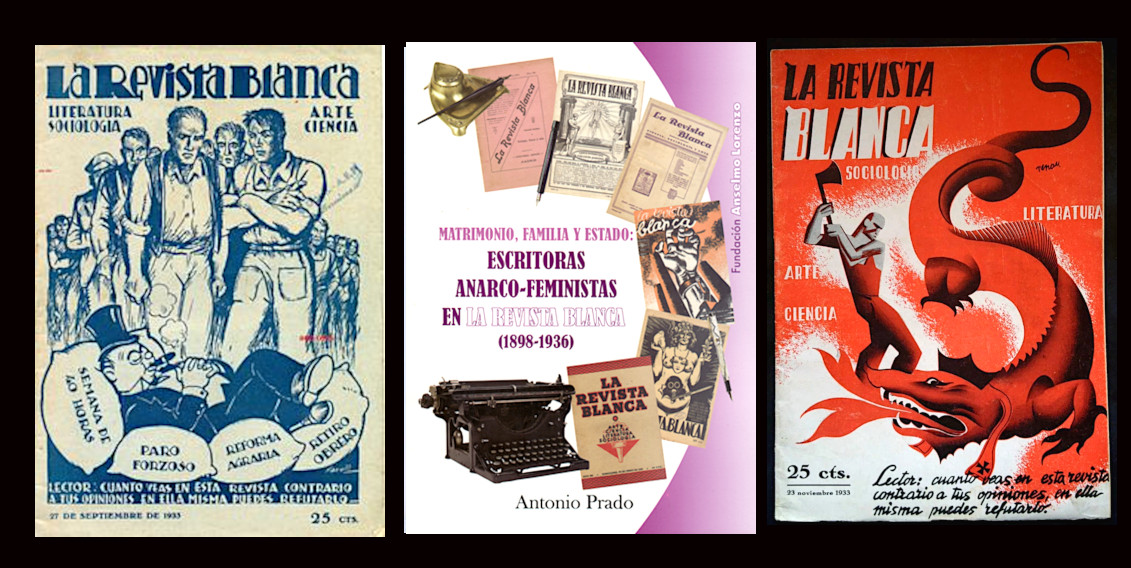 La Revista Blanca (The White Magazine), with a fortnightly circulation and fundamentally individualist anarchist content, was born in 1898. In both its stages you could read texts by anarchist writers and workers.

Anarcho-feminists at the dawn of the 20th century:

The cultural revolution launched in the late nineteenth and early twentieth centuries by the Spanish libertarian movement is a clear example of the strength that the working class has to reverse the established order in pursuit of a more just and egalitarian society.

As Alejandro Civantos points out, in a chapter of the book Cultura (s) obrera (s) en España, “in a period of barely fifty years […] Spanish anarchism promoted the most important cultural transformation in all of contemporary history.”

However, the dominant historiography has made sure that this story remains a mere marginal note. But what did this revolution consist of?

To answer this question, we must give a brief brushstroke of History. After the Spanish delegation of the International Workers Association (AIT) was founded in 1870, which culminated in the creation of the Spanish Regional Federation of the AIT, new cultural channels were established in the Spanish State where social and political structures were denounced since the anarchist postulates.

For the anarchism of the time, culture and education were fundamental pillars that should be available to the popular classes, this is how they could achieve their own emancipation: thanks to their own knowledge of their status as exploited.

With a population whose illiteracy rate was alarming, since anarchism it has been known to see in culture and literature a call to direct action. The objective was clear, to get the women and men who put their workforce at the service of the powerful out of ignorance through a comprehensive liberation project.

Athenaeums, libraries, plays and theatrical performances, but above all numerous anarchist newspapers flourished everywhere.
For the anarchism of the late nineteenth century, culture and education were fundamental pillars that should be available to the popular classes.

Spread throughout cities and towns, the libertarian press reached all corners of the Spanish state. From big cities to small towns with few inhabitants. More than a hundred titles in which the real problems of the workers could be read and where, contrary to the bourgeois or socialist press, the workers, from the factories or the workshops, wrote their own problems without censorship.

For example, Teresa Claramunt, an anarcho-feminist pioneer, would write in newspapers such as La Tramontana, Los Desheredados or El Productor about the terrible conditions of working women and the need for culture and their organization in unions.

Production widened with other types of publications appearing, such as sociological magazines, in which the proletariat began to meet authors such as Darwin, Galileo or Copernicus. Science, in fact, was a very important subject for anarchism, since in it there was a way of explaining the universe as opposed to religious explanations. Magazines such as Acracia or La Revista Blanca were true encyclopedias for male and female workers.

On this occasion, and due to the debates around the female question that were published on its pages, I would like to focus on La Revista Blanca, that seminar that already warned on its cover”Reader, what you see here may be contrary to your opinions.. Right here you can refute it “, and “Whatever your condition and gender, reader, don’t stop reading this magazine. “

Born as a bridge of solidarity to help the victims of the Montjuic trials, it ended up publishing 556 issues (168 in its first period and 388 in the second). With a fortnightly run and fundamentally individualist anarchist point of view. Its first stage began in July 1898 when, organised by two leading anarchists of the time, Teresa Mañé and Juan Montseny, perhaps better known by their pseudonyms: Soledad Gustavo and Federico Urales.

After a hiatus of 18 years, the magazine returned in 1923 with the incorporation of a young Federica Montseny,who from a very young age absorbed the ideals of anarchism from her parents.

Antonio Prado has studied in depth the contributions in the magazine made by three leading intellectual women. We refer to Soledad Gustavo, Federica Montseny and Antonia Maymón, who became prolific writers in the magazine , although they wrote in other libertarian media.

Their contributions are important to understand the history of worker feminism in the Spanish State. Thanks to their contributions ground has been gained and progress has been made in social improvements. These women created debates many of which still continue today in our own assemblies.

Soledad Gustavo was a rationalist teacher. At the age of 21, she opened the first secular school in Vilanova and later moved to Reus. In her thinking we find a seamless critique of capitalism and patriarchy, which she conceived as two sides of the same coin, understanding that neither of these two systems of oppression could be ignored; in fact, she attacked both bourgeois and socialists for not addressing them politically as a whole.

She harshly criticized the civil code and marriage. The question of free love is found throughout many of the texts she wrote, in fact she won the Second Socialist Contest for her work ‘Free love’.

She understood that for sexual liberation a transformation of class structures was necessary. There is a phrase by Soledad Gustavo that says “man already knows: either we rise up and we march together on the path of freedom or we all plunge into the abyss”, which well reminds me of the contemporary bell hooks in Entendiendo el patriarcado (Understanding patriarchy).

The figure of Federica Montseny has been one of the most studied and is one of the best known of Spanish anarchism. As we noted above, she grew up in an anarchist family. She was a writer whose literary production is abundant.

During part of the civil war, she headed the Ministry of Health and Social Assistance, in which she launched, among other measures, the first draft decree authorizing abortion in Spain; This, it should be noted, was also thanks to the unquestionable work of the anarchist doctor Amparo Poch y Gascón, her counselor in Social Assistance.

Montseny launched in La Revista Blanca novel proposals “of intersubjective relationships where the transformation of the domestic code of women into a new female sexuality was key to social transformation.”

In ‘The Lack of Ideality of Feminism’, she wrote: “Feminism, a word only applicable to rich women, because poor women have never been feminists, nor would they be allowed to be!” women did not question the existing institutions.

In fact, the debates between the different feminisms continue today. Pastora Filigrana launched the idea: Can you be a feminist without questioning the existing social and economic order that oppresses some women over others, some bodies over others?

For her part, Maymón was also a rationalist teacher and was president of the Women’s Association ‘La Ilustração de la Mujer’ —which had a hundred affiliates and was attached to the CNT—.

It is one of the main representatives of anarcho-naturism. In this sense, she advocated the regeneration of humanity in order to produce a new order based on the precepts of what is healthy, natural and good.

A life in which nature is at the center, where you can live in the open air and break with the toxic air of cities and factories; break with the diseases related to the poverty of the working class and the mental illnesses that capitalism produces.

We can frame Maymón in a much-needed anarchoecofeminism today, through which we fight not to save the limited resources of the planet.

It is true that the thought of these three women is very wide and we could extend this discussion at great length. When we approach their texts, we find strong materialistic approaches mixed with profound idealistic reflections that, at times, can suggest certain contradictions between their own approaches; However, when one examines them, you find that, even today, we ourselves continue to think in very similar terms and with debates that are not far removed from theirs.

We have not yet mentioned another of the great contributions that contributed to the cultural revolution that anarchism started. It is important to note that the contribution that was made from the anarchism of the folkloric genre or serialized novel brought literature much closer to the proletariat, creating a new genre: the revolutionary kiosk novel.

Covers of the revolutionary newsstand novel .. the Anselmo Lorenzo Foundation

In the collections La Novela Ideal and La Novela Libre were published, works by male and female workers who in their spare time wrote short proletarian stories.

There is no great literary refinement in the works, however, as Lily Litvak points out, it was genuinely popular literature. “We want optimistic novels that fill the soul with hope,” they asked from the seminar for future collaborations. Read massively, they approached an increasingly heterogeneous public.

Prado rescues six authors of the 17 that have been found in the collection of the International Institute of Social History in Amsterdam. Margarita Amador, María Solá, Ángela Graupera, Regina Opisso and, of course, Federica Montseny and Antonia Maymón.

The central axis of these novels written by working women is the liberation of women through love, a free love without the intervention of patriarchal structures: State, Church and traditional family.

The genre of the anarchist rose novel was the gender of the feminine subject par excellence, because in these novels love, desire and joy were demanded for women. In addition, in all of them, the protagonists are turned around, the representatives of the status quo are the bad guys and the revolutionaries the good guys who want to change the terrible material conditions caused by a corrupt system.

Through their narratives, they denounced the social order, both the State and its perverse policies and the morality of the Church that oppressed the people. On the contrary, they offered alternatives that aspired to a new, more harmonious system.

They believed in the new woman, more liberated from both the family and the maternal burden, and also in the new family based on true love and in which alternative forms were investigated compared to the traditional one: adoptive family and single mother families.

The truth is that there are few works that value the literary production of these women and it would be necessary to produce more in-depth studies of these works and their implications.

Once again, the invisibility of historical processes that aspired to great changes on the part of the working class becomes evident when we approach these women; writers who deserve to be rescued from oblivion and to be positioned in the place they earned.

Women who, despite the difficulties they suffered, took a step forward to contribute to the construction of a more just and free social system, a system that is worth living, which we still seek 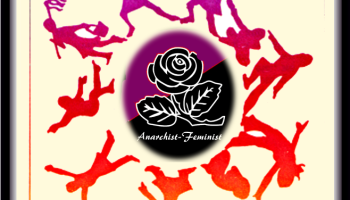 How To Destroy Domination : Anarcha-Feminism 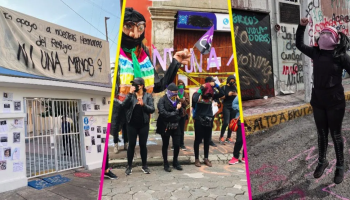 Feminists and Anarchists at War with Femicide in Mexico 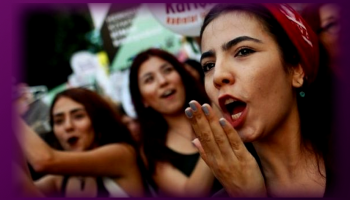 Between the Feminist Wave and the Green Anti Capitalist Sea 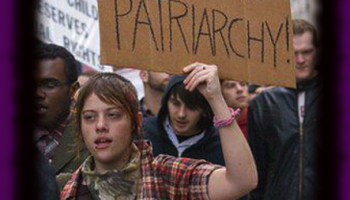 Anarcha Feminism is being Truly Anti-Authoritarian