The idea of turning deserts into forests seems promising, but how tangible is it? 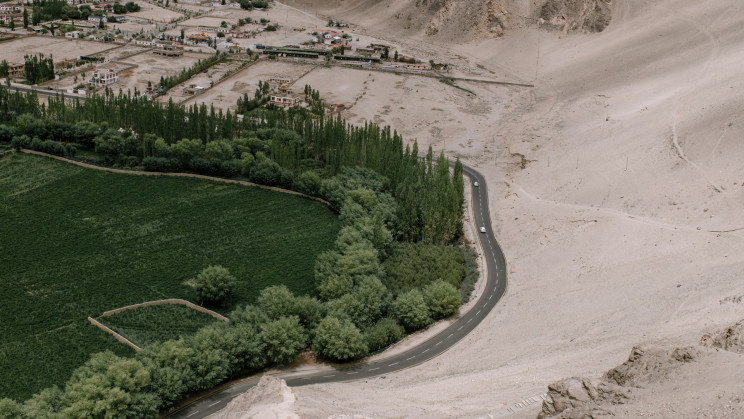 A report from the UN reveals that drylands, including vast areas of desert, cover 41.3% of Earth’s total land area. What if large amounts of this land could be converted into fertile ground capable of producing crops? This is a particularly important question in China, which has a total land area of 3.5 million square miles, but only 12% of which is arable.

In 2016, researchers from China’s Chongqing Jiaotong University claimed to have developed a novel technology that can convert desert to arable land.

How China turns desert into farmland

The technology developed by the researchers at Chongqing Jiaotong University involves a paste made from plant cellulose, that can greatly improve the ability of desert sands to hold water, minerals, air, microbes, and nutrients essential for plant growth.

This paste was applied to a sandy 1.6-hectare plot in the Ulan Buh Desert, in the Mongolian Autonomous Region. Over time, the plot was transformed into fertile cropland capable of producing tomatoes, rice, watermelon, sunflowers, and corn.

Professor Yang Qingguo, of Jiaotong University, explained that “The costs of artificial materials and machines for transforming sand into the soil is lower compared with controlled environmental agriculture and reclamation”

According to the Chinese researchers, the plants grown in the sandy plot delivered higher crop yields, using the same amount of water needed for growing crops in normally arable soils. Moreover, the amount of fertilizer needed to produce the crops was lower than what is generally required for the growth of vegetables in other soils.   Advertisement

This research was conducted by scientists Yi Zhijian and Zhao Chaohua, and their results were published in 2016 inthe English language journal Engineering, which is released by the Chinese Academy of Engineering (CAE). The technique undertaken by the researchers was also presented at the United Nations Convention to Combat Desertification (UNCCD), an initiative begun in 1994, with the aim of stopping the advance of desertification by 2030 through the use of global cooperation and long-term strategies.

The research work at Jiatong University is not the first Chinese attempt to convert desert into fertile land. China launched a much more ambitious program in 1978, known as the Three-North Shelter Forest Program, and often referred to as the Three-North Shelterbelt Program, or Great Green Wall. The goal of this program is to stop the expansion of the vast Gobi Desert and initiate reforestation projects in the northeast, north, and northwest regions.Advertisement

Thus far, the program has effectively curbed the expansion of desertification and helped prevent sandstorms and soil erosion, conserve water and soil, and safeguard agriculture in the region.

The Shelter Forest Program has a projected completion date of 2050, by which time it is estimated that a projected 35 million hectares (87 million acres) of land will have been converted to forest. The Chinese government claims it is the world’s biggest reforestation initiative.

At the same time, in the Loess Plateau, grass and forest coverage has been increased by around 60%, and the silt build-up in the Yellow River has been reduced considerably. Advertisement

NASA satellite images confirm that forest cover has increased in China over the last 20 years due to the various conservation efforts launched by the Chinese government.

Jennifer L. Turner, director of the China Environment Forum at the D.C.-based Woodrow Wilson Center, told National Geographic magazine in 2017 that. “With the Great Green Wall, people are planting lots of trees in big ceremonies to stem desertification, but then later no one takes care of them, and they die.”

The magazine also pointed out that afforestation can exceed the land’s carrying capacity, dooming the trees to an eventual death without constant human intervention. For this reason, in 2008, the World Bank recommended China focus more on quality than quantity in some areas of the project.Advertisement

Despite some initial problems, China has continued the world’s largest afforestation project and this has resulted in some positive outcomes. Since the project began, the northern region has witnessed a growth in green cover from 5% to 13.5%, and sections of the Gobi desert are now blooming with healthy vegetation, fertile soil, and increased rainfall.

Another major breakthrough came in the form of replacing the Maowusu Desert in northern China’s Inner Mongolia Region with lush forest. By 2020, 93.24% of the Maowusu desert had been restored with vegetation, and the desert areas, which were previously ranked among China’s four largest, have now almost disappeared from the map.

Beyond the Great Green Wall, China has taken other measures to stem the growth of deserts. A series of laws passed beginning in the early 2000s, also addressed the problem with efforts to return some farm and grazing lands to a state of forest cover or grassland.Advertisement

More attempts across the world to transform deserts into forests

What if all deserts turn green and fertile?

If all the deserts on Earth become fertile, this would have a number of consequences, both positive and negative for life on earth.

Desert greening is a challenging task but the experiments conducted in China and other parts of the world to implement desert reforestation on a large scale have raised hopes for a healthy and resourceful future ahead.