Pola Roupa, a member of Greek urban guerrila group Revolutionary Struggle, has been sentenced to life and 25 years imprisonment over the bomb attack on the Greek National Bank and the offices of the IMF in Athens in April 2014.

The attack destroyed the front of the National Bank. Nobody was hurt, as people who conducted the attack took precautions and informed the authorities before the blast, allowing enough time for evacuation.

According to the prosecution, the attack could have been much more damaging if not for the security guard who managed to lower the metal shutters at the Greek National Bank before the evacuation, hence preventing the total collapse of the building. Should the building have collapsed it would likely have  resulted in the destruction of Greek banking system and massively damaged the Greek economy. END_OF_DOCUMENT_TOKEN_TO_BE_REPLACED

24/02, early in the morning, a group of police special forces (EKAM) entered Korydallos prison and abducted comrade Konstantinos Giagtzoglou (who is on hunger strike since 21/02 demanding his permanent transfer in Korydallos prison, located in Athens) in order to transfer him to Larisa prison.

The comrade fought back which resulted in him being injured by the pigs. He wasn’t allowed to take any of his stuff, not even his medicine. As an immediate response, the rest of the prisoners rose up and captured all prison wings, demanding a meeting with a representative of the Justice Department. They demand the immediate return of Konstantinos in Korydallos prison.

As a result of the massive mobilization in Korydallos, Malandrino and Chania prisons, a representative of the Justice Department has met with representatives of the prisoners in Korydallos prison (the whole prison was occupied by the prisoners for 5 hours) and has promised them that there will be a new council in session in Monday to examine our comrade’s demand.

The prisoners ended the occupation warning him that they will take action again if the comrade’s demand is not met.
Ntinos is now in Larisa prison and announced that he will escalate his hunger strike to thirst strike starting from Sunday, 25/02/2018. He has also published a letter about his struggle.

Via Perseus999   Help translate this video

These images were leaked out of Moria refugee camp in the island of Lesbos in Greece, exposing the dreadful and inhumane conditions that migrants are being forced to endure in order to survive in – 5°C / 23° F, sleeping in tents, on the frozen ground, under heavy snowfall. The severe weather conditions had been foreseen and expected for many days before, and yet hundreds of people that sacrificed everything to escape to “civilized” Europe have been left to their own demise.

The footage itself was captured on January 7, 2017 by an anonymous refugee, as a desperate message to the world about the appalling conditions they face. These images contradict the January 5, 2017 statement of Greek Migration Minister, Yiannis Mouzalas, when he stated “there are no refugees or migrants living in the cold anymore. END_OF_DOCUMENT_TOKEN_TO_BE_REPLACED

from subMedia.tv on Vimeo.

We continue to be in awe, of the spirit of direct action by our anarchist comrades in Greece.

The fascist political party L.E.P.E.N. was gearing up to open its doors on September 18th, the same day that Antifa rapper Killah P was murdered by neo-nazis. A large crew of Antifa comrades went to the new L.E.P.E.N. HQ and demolished it.

This was followed up, by a clean-up of Exarhia Square. Comrades crewed up and kicked out drug dealers, out of this historically anarchist neighborhood.

Some more context on the situation – https://en.squat.net/2016/07/14/athens-responsibility-claim-for-the-execution-of-mafioso-habibi-in-june/#more-17519

To support our work go to http://sub.media/donate

While the world’s media is suitably distracted by the Olympic Games in Brazil, the war in Syria and beyond continues to see thousands of people – men, women and children – killed each week and many more attempting the perilous journey as refugees to seek safety.

Meanwhile in the last two months there has been a deafening silence in the media about the plight of the thousands of refugees still stuck in Greece. Only 2500 refugees have so far been granted asylum status – the process is excruciatingly slow and most of those granted this status have yet to be relocated.

A report by the Greek Centre for Disease Control recommended all 16 of the refugee detention centres it inspected be closed due to unsanitary conditions and poor water supply. But while the Greek authorities seem unable to move forward, grassroots activists – anarchists – have yet again taken matters into their own hands and are providing shelter and food to those in need. However, this is not charity, or the result of a philanthropic endeavour, but direct democracy in practice.

Anarchists in Greece have been providing squatted accommodation – abandoned schools, hotels etc – for refugees – since the current conflicts in Syria began. And as soon as the Greek authorities organised evictions of these premises, more buildings have been squatted. END_OF_DOCUMENT_TOKEN_TO_BE_REPLACED 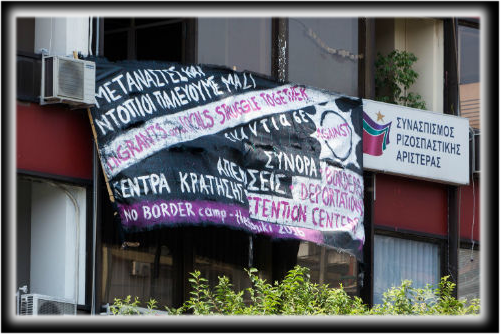 translated from La Marea with thanks     redaccion@lamarea.com

Three houses where dozens of refugees were staying in Thessaloniki have been vacated by order of the government of Tsipras , according to reports from support collectives on the scene.

One building, a former orphanage, is being demolished. As they explained to La Marea, 32 refugees have been transferred to other  “unspecified” camps and there have been around fifty arrests.

On Monday 22 June 2015, 40 anarchists of anarchist collective “Rouviconas” in Athens, defied the so called majority in the streets, infiltrated at the center of a right wing protest of approximately 5.000 protesters demonstrating in favour of EU and IMF austerity measures in front of the Greek parliament in Syntagma square and burned several European Union flags shocking the ultra conservative crowd. END_OF_DOCUMENT_TOKEN_TO_BE_REPLACED

If we accept that our predator capitalism is  rushing into financial and environmental disaster we need an equally vigorous and attractive alternative that people can turn to as things get worse.

One possibility is local ‘stamp-scrip’ (freemoney), which gradually loses its value if not spent, so people spend it immediately and the local economy booms. There’s no use hoarding capital in this scheme.

END_OF_DOCUMENT_TOKEN_TO_BE_REPLACED

(…update: after various threats and deadlines by the ECB, Germany, IMF, etc. have passed, and with Syriza openly threatening to get a loan from Russia and China,  leaked rumours of a a deal and partial Greek victory are in the air, causing the euro to rise briefly. We hope Syriza will NOT back down and sell out, Greece wants and needs a revolution!…  …….thefreeonline   )

by Jeff Nielson   reblogged with thanks

With a sane (and apparently honest/legitimate) government achieving election in Greece, the past six years of European “bail-out” fraud is about to be fully exposed. Indeed, the recent history of Greece, alone, is little more than a road-map of fraud, conclusively illustrated by a concise summation of events.

a) In 2009 and early 2010, the ECB “bailed-out” Greece on several occasions – and then it immediately went bankrupt, defaulting on 75% of its national debt. 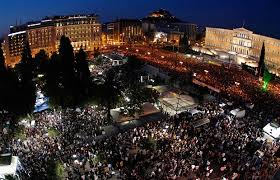 END_OF_DOCUMENT_TOKEN_TO_BE_REPLACED

Thousands of people march -under rain-  in the centre of Athens against the state of emergency that Greek Police and the minister of Police Nicos Dendias are trying to implement against the Anarchists. A few weeks ago Christodoulos Xiros the member of the communist armed struggle group ’17November’ escaped from Korydalos prison. Since then the police started a witch hunt against Anarchists supposedly looking for Xiros. At least 26 houses of Anarchists have been raided so far, with the police and the attorenys general destroying the homes they attack. END_OF_DOCUMENT_TOKEN_TO_BE_REPLACED