from Bloomberg News and Earth First

A chunk of Sempra Energy’s natural gas pipeline sits in the dirt behind a community center in the village of Loma de Bacum in northwest Mexico. Guadalupe Flores thinks it would make a great barbecue pit.

“Cut it here, lift the top,’’ he says, pointing to the 30-inch diameter steel tube. “Perfect for a cook-out.’’Photo: Yael Martinez/Bloomberg

It would be an expensive meal. The pipeline cost $400 million, part of a network that’s supposed to carry gas from Arizona more than 500 miles to Mexico’s Pacific coast. It hasn’t done that since August, when members of the indigenous Yaqui tribe – enraged by what they viewed as an unauthorized trespass their land – used a backhoe truck to puncture and extract a 25-foot segment. They left the main chunk about a mile from the community center, perpendicular to the rest of the pipeline, like a lower-case t.

The impact extends far beyond Loma de Bacum and its 4,500 residents. Arizona’s gas exports to Mexico have plunged 37 percent since the shutdown, hitting an eight-month low in December. Mexico’s state utility is having to burn fuel oil instead to generate power, raising costs.

It’s not an isolated case. Mexico’s opening of its energy industry has succeeded in attracting capital, but it’s also been beset by territorial or environmental disputes, often involving the country’s myriad indigenous groups. When protest turns into sabotage, there’s a risk that investors will be put off from future phases, like an extensive shale development. It’s also grist to the mill of the leftist frontrunner for next year’s presidential election, who’s vowing to reverse some of the reforms.

The Yaquis of Loma de Bacum say they were asked by community authorities in 2015 if they wanted a 9-mile tract of the pipeline running through their farmland — and said no. Construction went ahead anyway.

The Energy Ministry acknowledged that account is true, in a statement that highlights the difficulties its officials confront. Consultation of the eight Yaqui communities along the route was carried out, as required by law. Seven of them gave a green light, the ministry said by e-mail, “while the town of Loma de Bacum refused consent.’’

A piece of the gas pipeline extracted by the Yaquis of Loma de Bacum.  Photo: Yael Martinez/Bloomberg

The project is now in a legal limbo. Ienova, the Sempra unit that operates the pipeline, is awaiting a judicial ruling that could allow them to go in and repair it — or require a costlier re-route. “If they want to build a pipeline, that’s fine,’’ said Flores, the would-be barbecue designer who’s a local community leader. “But it won’t pass through here.’’

At the Energy Ministry in Mexico City, that’s becoming a familiar refrain. END_OF_DOCUMENT_TOKEN_TO_BE_REPLACED

Official Statement From Tom Goldtooth, of The Indigenous Environmental Network:

We are appalled by today’s forced evacuations of indigenous people at the Camp at Standing Rock, they are a violent and unnecessary infringement on the constitutional right of water protectors to peacefully protest and exercise their freedom of speech. It hinders the camp clean up process and creates confusion and chaos that puts the Missouri River at risk of pollution from construction and camping debris.

Today’s expulsion is a continuation of a centuries old practice, where the U.S. Government forcefully removes Indigenous people from our lands and territories.

We urge supporters of the water protectors to continue to resist this travesty by organizing mass mobilizations, distributed actions, speaking out against the violations of the Treaty rights of the Standing Rock Sioux Tribe and the Seven Council Fires of the Great Sioux Nation, and continuing to source up the capacity for litigation and grassroots organizing against the Dakota Access pipeline.

Our hearts are not defeated. The closing of the camp is not the end of a movement or fight, it is a new beginning.

They cannot extinguish the fire that Standing Rock started. It burns within each of us. We will rise, we will resist, and we will thrive.

We are sending loving thoughts to the water protectors along the banks of the Cannonball River, today. May everyone be as safe as can be. #noDAPL

see also…How to Stop a Pipeline: Trump, DAPL and the Power of Mass Action

WHAT ANARCHISTS HAVE BEEN SAYING FOR YEARS, AND WHAT LIBERALS NEED TO START HEARING

Originally published to It’s Going Down

On Wednesday, December 7th at Texas A & M University, as FBI agents monitored hundreds of protesters from the tops of roofs, heavily armed riot police clashed with demonstrators bent on disrupting and shutting down an event organized by Preston Wiginton, a 51 year old former student of the campus and long time white supremacist.

The event featured a talk by Richard Spencer, a leading ideologue within the growing “Alt-Right,” which attempts to re-brand fascist, Neo-Nazi, and white nationalist ideas for the millennial generation in order to create an all-white fascist “ethno-state.”

The clashes that erupted on the campus are just the latest in a string of growing confrontations between autonomous revolutionaries and the racist far-Right which is acting as an auxiliary force of the Trump regime while attempting to push it farther to the right.

Suddenly, anarchists and antifa, who have been demonized and sidelined by the wider Left have been hearing from liberals and Leftists, “you’ve been right all along.” But while revolutionary anarchist ideas and starting to have a broader currency, many of the things that people are starting to pick up on, we have been saying for years. END_OF_DOCUMENT_TOKEN_TO_BE_REPLACED 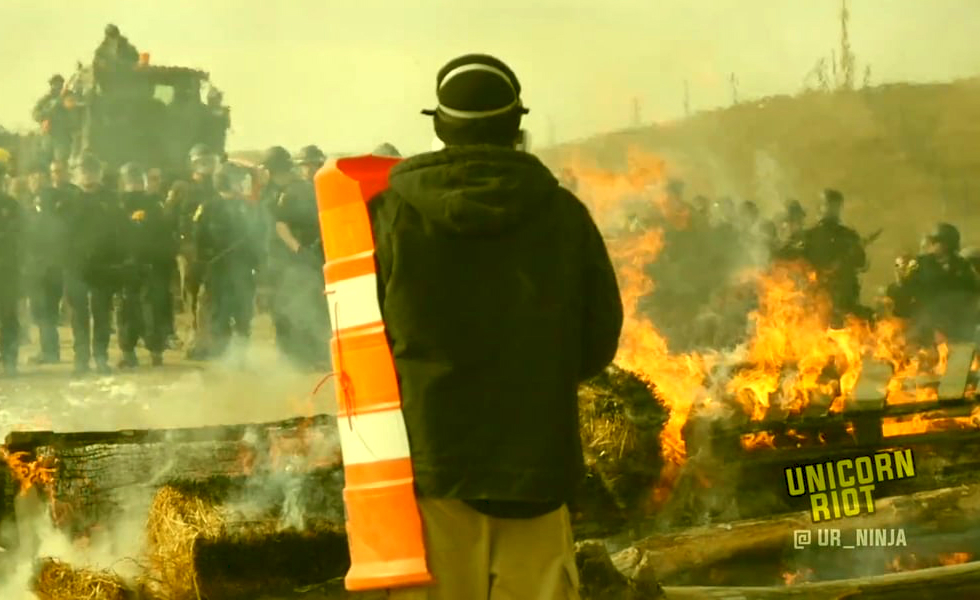 1. THE OBAMA ADMINISTRATION IS PASSING THE BUCK, TO TRUMP.

On Sunday, December 4, 2016 the Army Corp of Engineers denied the easement for pipeline development under Lake Oahe and made recommendations for an Environmental Impact Statement (EIS) on the river crossing and exploration for alternative routes. An EIS would likely take months to undertake and would be subject to the Trump regime’s Environmental Protection Agency.

Energy Transfer Partners issued a statement threatening to continue development regardless of the Army Corps decision stating that “Nothing this Administration has done today changes that in any way.” In spite of recent snow storms ETP has continued construction. END_OF_DOCUMENT_TOKEN_TO_BE_REPLACED