There’s something delicious about seeing very rich and powerful people take on a fight and then realise they’ve bitten off more than they can chew. They’re not used to it and sometimes seemingly small victories are the best we can hope for.

Last week Class War founder, Ian Bone, promoted globally on facebook the idea of redressing the balance on housing in London by occupying the Shard. There are multi million quid apartments in the building laying empty year and after year, meanwhile homelessness is on the rise and the vast majority of Grenfell survivors have still not been re-housed.

Before I go further I should say I’m part of Class War. My PhD research from the inside of the group has unearthed many examples of both the authorities and the media imagining that Class War just has to press a button somewhere and the unruly mob of thousands rises from the streets to literally devastate the avenues where the wealthy live. Class War are organising protests all the time and the size of a protest doesn’t really have an exact science behind it; some things take off and most things don’t.

The vast majority of Class War events pass without any media interest. This means that when they do take off and large numbers attend a demo and boisterous things occur the police and others can look terribly inadequate so there has become a standard theme to policing Class War events: they send at least a van of cops along, hours in advance just in case, presumably with others on standby if they feel it necessary.

END_OF_DOCUMENT_TOKEN_TO_BE_REPLACED

info from… Follow The Money                 Over the past two years, Qatar has conducted over $86 billion worth of transactions in Chinese Yuan and has signed other agreements with China that encourage further economic cooperation.

This is incredibly important because Qatar shares its major natural gas reserve with Iran, and Iran also conducts its oil-related business deals with China in Yuan. Iran signed deals with France’s Total, a multinational integrated oil and gas company, to develop this project.

If Iran and Qatar continue down this path, the U.S.’ self-asserted hegemony over the world’s financial markets will directly come under attack.

Until now the biggest losers are the 2 million immigrant workers who have been treated as slave labour, working in 40C degree heat,  but any real war on the oil and gas fields could wreck the world economy. 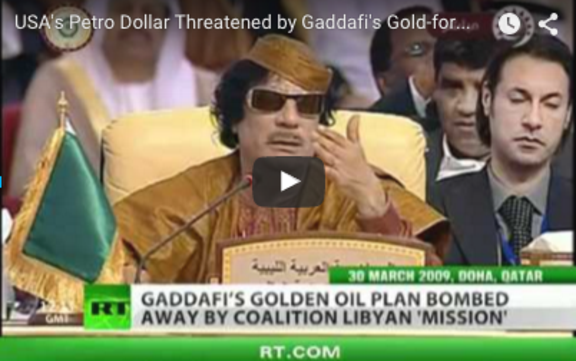 Remember that Hillary Clinton’s leaked emails confirmed that the U.S. and France were so concerned with attacking Muammar Gaddafi (and destroying Libya to this day) not out of humanitarian concern, but rather, out of fear of his plan to unite Africa under a single gold-backed currency that would be used to buy and sell oil on the global markets, thus sabotaging their lucrative petrodollar monopoly

Remember that in 2000, Saddam Hussein announced he would sell Iraqi oil in euros, and the Guardian reported in 2003 that Iraq had actually netted a handsome profit in doing so — at least until the U.S. invaded not long after and immediately switched the sale of oil back to U.S. dollars. END_OF_DOCUMENT_TOKEN_TO_BE_REPLACED