But already we are bursting through the physical limits of the planet that sustains us. Climate breakdown, soil loss, the collapse of habitats and species, the sea of plastic, insectageddon: all are driven by rising consumption.

The promise of private luxury for everyone cannot be met: neither the physical nor the ecological space exists.

But growth must go on: this is everywhere the political imperative.

And we must adjust our tastes accordingly. In the name of autonomy and choice, marketing uses the latest findings in neuroscience to break down our defences.

Those who seek to resist must, like the Simple Lifers in Brave New World, be silenced – in this case by the media. With every generation, the baseline of normalised consumption shifts. Thirty years ago, it was ridiculous to buy bottled water, where tap water is clean and abundant.

Today, worldwide, we use a million plastic bottles a minute. END_OF_DOCUMENT_TOKEN_TO_BE_REPLACED

Like Loading...
Every year wealth and power are concentrated in fewer and fewer hands.. HOW CAN WE STOP THIS MADNESS NOW?

‘Welfare for the Wealthy’: 227 Congressmen Pass $1.5 Trillion Tax Cut for Corporations and the Rich

“It’s immoral that many hardworking families will pay a higher tax bill or lose access to critical services like healthcare so that some CEO can get a bigger bonus and buy a bigger yacht.”   Common Dreams  by  Jake Johnson, staff writer¡ .. 34 Comments

By a vote of 227-205, Congressmen on Thursday passed a tax bill that would permanently cut taxes for massive corporations, reward the extremely wealthy by eliminating the estate tax, trigger billions of dollars in automatic cuts to Medicare, and raise taxes on millions of middle- and working-class families.

END_OF_DOCUMENT_TOKEN_TO_BE_REPLACED

CALLOUT: MAY DAY 2017 – WE ARE POOR BECAUSE THEY ARE RICH… AND IT’S RIGHT TO REVOLT! 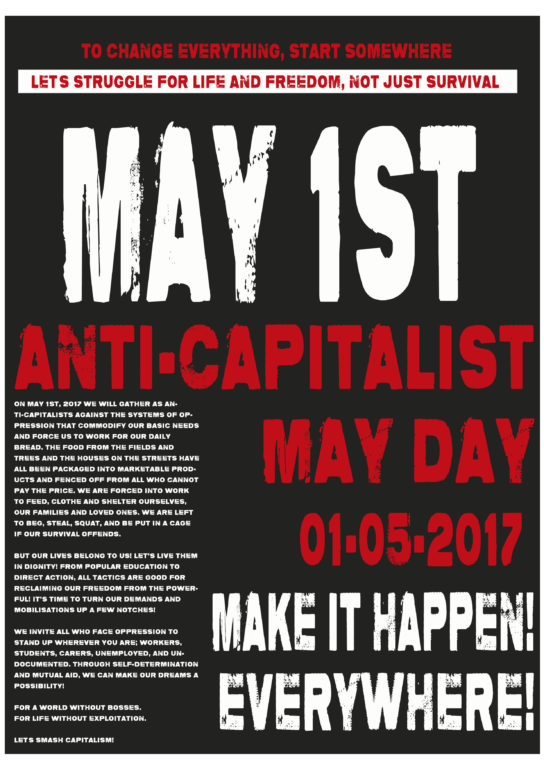 BY MR. MILITANT NEGRO  May 1st is a day of solidarity with other exploited people across the world and within our communities. This is a call to reclaim and rebuild the history and struggle against oppression with an anti-capitalist gathering, celebration and resistance. This year we will commemorate those who fought with their lives for an 8 hour workday in Chicago over 100 years ago, and the innocent anarchists who lost their lives at the hand of the law.

On May 1st 2017 we will stand against capitalism, colonialism, borders and the state; we will stand for freedom, community and self-determination as we continue the struggles of workers started so many years ago.

Capitalism continues to steal land, life, culture and language from in the name of profit. The empire it has built on stolen land keeps workers under the boot of the bosses, the unemployed under the boot of the state, as our labour increases their profit margins and we merely survive and dream of the lives we can live in our worn-out bodies come retirement.

On May 1st, 2017 we will gather as anti-capitalists against the systems of oppression that commodify our basic needs and force us to work for our daily bread. The food from the fields and trees and the houses on the streets have all been packaged into marketable products and fenced off from all who cannot pay the price. END_OF_DOCUMENT_TOKEN_TO_BE_REPLACED

Autogestió: Adventures into the New Economies of Catalonia from Enfable on Vimeo.  article AVAILABLE IN Castellano and Catalan

END_OF_DOCUMENT_TOKEN_TO_BE_REPLACED

Horror arrives at London Evening Standard by the pen of Matt Watts, supposedly a journalist , a posh and naive pawn, for whose neoliberal minds for whom it is difficult to understand the meaning of gentrification and class struggle.

<< A group of “five stars squatters” has taken over a historic office block just yards from Buckingham Palace. Activists who have entered the former HQ of the Institute of  Directors at 123 Pall Mall today vowed to stay “as long as they can”. The six-storey, multimillion-pound office block is 700 yards from Buckingham Palace. The squatters moved in last week and have renamed it as the Instutute of Dissidents.

END_OF_DOCUMENT_TOKEN_TO_BE_REPLACED

#‎ReconstrucciON29‬ ‪#‎Madrid‬: People are rebuilding the evicted and demolished house at 29 Ofelia Nieto st right now. Here is a video with english subtitles about the house: A documentary of Michele Cristofoletti & Hugo Atman. Synopsis

Six square meters. That’s enough for the city of Madrid to take the family Gracia Gonzáles away the ownership of their house, in which they live. Father, mother, two daughters and their families who have been struggling for 10 years to see recognized their right to live in the very same house in which they grew up. END_OF_DOCUMENT_TOKEN_TO_BE_REPLACED

The Solidarity Economy as a Strategy for Revolution

reblogged with thanks from:   http://www.corfizz.com/story.html

There are three roads to revolution. Some focus on seizing state power, others on revolutionary expropriation. The third strategy is to think seriously about how we would actually like to organise our lives and then to start putting these ideas into practice, constructing the new world directly, as a parallel alternative to capitalism.

Let’s be clear that the solidarity economy already exists and people are already fully engaged in the approach that I am describing. I am not messianically opening a new revolutionary pathway; I am merely reporting on a fruitful line of action, introducing it to newcomers, as well as offering some ideas about how it could develop to those who are interested.

END_OF_DOCUMENT_TOKEN_TO_BE_REPLACED

Occupied London #5, “Disorder of the Day”

Voices of Resistance from Occupied London #5: Disorder of the day