Climate change can’t be ignored. We need to live more simply so others can simply live.

They were there to mark the death and destruction caused by fossil fuel economies.

Carrying signs such as ‘Warren Entsch’s Walking Dead’ and ‘Tony Abbott Bit Me’, the zombie horde drew the link between horror fiction and the fact of climate denialism within the LNP government.

The Zombie Shuffle is in solidarity with a zombie event being held at the International Mining and Resources Conference (IMARC) in Melbourne.

The MASIL Project (Mapuche-Aboriginal Struggles for Indigenous Land) has initiated the Melbourne event to highlight the damaging effects of transnational corporate mining on First Nations peoples.

The Mapuche are a First Nations people from Chile.

They have partnered with Warriors of the Aboriginal Resistance for this event.

Zelda Grimshaw explained, “People often joke about ‘the zombie apocalypse’ but we know it is only half a joke.

Droughts, fires, plagues, floods, epidemics, rising seas, terrible storms and other climate impacts really are the stuff of apocalypse, and we know that this is what is coming unless we end fossil fuel use.

“In Melbourne the global heads of mining companies are meeting to work out how best to profit from the extinction of our species.

First Nations peoples in Australia as elsewhere are on the front lines of mining and climate impacts.

Here in Queensland, the negotiation rights of indigenous landholders have been trampled by the State and Federal governments in order to facilitate the Adani mega mine.

So we are shuffling in solidarity today.

“We are a reef electorate.

The Great Barrier Reef is suffering as a result of Australia’s coal-fired power stations, fracking, and coal exports.

Our federal representative, Mr Entsch, has yet to take any meaningful action at all to protect our people, our towns and our reef from continued fossil fuel use.

This needs to change, and quickly.”

Stop Adani Cairns was refused an audience with Mr Entsch to discuss the Intergovernmental Panel on Climate Change (IPCC) report on climate change, which warns that a temperature rise of above 1.5 degrees will have catastrophic consequences for humanity.

Stop Adani Cairns is demanding that Mr Entsch read the report and follow the recommendations to phase out coal and gas immediately from the Australian economy.

Hambacher Forest: Another day is over in this tough, weeks-long eviction by police and state machinery for the profits of RWE and their coal lobby.After the destruction of Oaktown, Gallien, Cozytown, Beechtown and Kleingartenverein, Lorien is the last major occupation that is still fought for. For days, the police there tried to evict the people from their tree houses

Call out for a decentralised day of action on Sun. September 30: Hambi stays! #HambiBleibt/We do not want a coal phase-out by 2038 nor 2030, rather we want to get out of coal immediately. We need to get out of this globally devastating dirty energy that has no future…  ……

END_OF_DOCUMENT_TOKEN_TO_BE_REPLACED 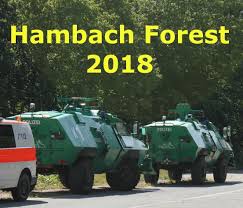 In the next days, while RWE employees, with support from the hired soldiers of the German state, attempt to evict the occupation, hundreds of people will join the forest struggle, in order to protect the climate justice protest-camp, and there are many ways to take part. See the text “How do I become active?” for more information. END_OF_DOCUMENT_TOKEN_TO_BE_REPLACED

On Thursday, September 17th, members of Northern Rockies Rising Tide and Blue Skies Campaign staged a peaceful blockade in order to prevent a coal train from entering the Missoula rail yard in an act of peaceful protest against Montana coal export projects that threaten the health of rail line communities and the global climate. This nonviolent action is part of a wider nationwide movement called Flood the System, which is mobilizing people across the US this fall to call for real climate solutions in the lead-up to December’s UN climate change negotiations in Paris.

Two community members, Lee Van de Water and Shannon Curry, locked their arms together and refused to move for the mile long coal train. With other participants, Lee and Shannon were able to hold space on the tracks for an hour, preventing it from moving towards its west coast destination. After refusing to leave and going limp, both were cited and released for trespassing.

“We refuse to let such a beautiful place be completely destroyed,” stated blockader Shannon Curry. END_OF_DOCUMENT_TOKEN_TO_BE_REPLACED

Ramping up renewed efforts to end mountaintop removal mining in central Appalachia, scores of protesters staged a daring action at the controversial Hobet strip mine today in Boone County, West Virginia, shutting down operations through a series of coordinated lock downs, tree-sits and banner drops. In a symbolic challenge to the Obama administration’s failed regulatory policies, the protest targeted the Hobet 45 mountaintop removal mine, which had been granted a widely denounced permit over two years ago.

According to RAMPS, a West Virginia-based grassroots groups that organized the “mountain mobilization” protest as part of a nationwide summer of actions against devastating extraction industry operations, St. Louis-based mine owner Patriot Coal has left behind a legacy of destruction in coal country for both area residents and miners. Patriot filed for bankruptcy earlier this month, which could also affect pension and United Mine Workers of America union contracts.

“The government has aided and abetted the coal industry in evading environmental and mine safety regulations. We are here today to demand that the government and coal industry end strip mining, repay their debt to Appalachia, and secure a just transition for this region,” said Dustin Steele of Matewan, West Virginia, in a released statement. The son and grandson of union coal miners, Steele took part in one of the truck lockdowns.

Protesters at Hobet mine in Boone County. Photo courtesy of RAMPS campaign.

Citing the mounting evidence of the health and humanitarian crises in the coalfields from toxic mining fallout, including a rise in black lung disease and links to birth defects and cancer, the protesters also stationed banners on the mine site: “Coal Leaves, Cancer Stays.”

“The coal companies are poisoning our water and air, and they’re treating the workers no better than the land — fighting workplace health and safety protections to get the most out of labor as they can,” said Junior Walk, a former coal company employee from nearby Whitesville, West Virginia, who won the 2011 Brower Youth Award for his environmental activism.

Coal mining residents have pleaded for basic civil rights and environmental protection for years, with more than 20 peer-reviewed studies suggesting higher risks and links between reckless strip mining and devastating health impacts, including birth defects, cancer and chronic heart, lung and kidney disease. (A recent report noted that strip miners are even subjected to unacceptable levels of black lung disease.)

A bill, the ACHE Act, calling for an emergency moratorium on mountaintop removal mining was recently introduced into Congress.

For updates on the protests and arrests, follow RAMPS campaign.