”Whilst the Russian government’s claims that the revolution was some kind of “Nazi Junta” are false, Ukraine does have a rising problem with militant fascism that cannot be ignored.

In a bid to combat the growing far-right, a group of anarchists calling themselves Rev Dia (Revolutionary Action) have begun to organise”.
”They’re armed, training, and have never spoken to journalists before. Until now…
(We fucked up the clip for a few seconds at 04:43 by having the wrong audio with the subtitles. The subs are what he said though. Sorry about that”.)
– patreon.com/popularfront – popularfront.co #Ukraine #Russia END_OF_DOCUMENT_TOKEN_TO_BE_REPLACED

A group of masked assailants attacked a  Roma minority camp on the outskirts of Lviv, killing one man and wounding four others.

text via Al Jazeera with thanks      Masked assailants have attacked a Roma camp in western Ukraine, killing one person and injuring four others including a child..

Police said on Sunday that a group of masked individuals carrying baseball bats and knives stormed the camp housing the Roma minority on the outskirts of the city of Lviv late on Saturday.

”According to Ukraine’s Zaxid.net, the recent lethal attack on a Roma camp in Ukraine has been linked by the law enforcement to a popular VKontakte (VK) community called “Sober and Angry Youth” (Твереза та зла молодь Ukrainian, or Трезвая и Злая Молодежь in Russian). The largest page linked to this straight-edge, neo-Nazi group has over 85,000 followers, while there are numerous local “chapters” of the organization across Ukraine, Russia, and other Slavic countries”.

see also: US is Arming Neo-Nazis in Ukraine

END_OF_DOCUMENT_TOKEN_TO_BE_REPLACED

By Katherine Brooks        Two members of the Russian punk activist group Pussy Riot were detained in Russia on Monday after participating in a protest outside of a Siberian prison, The Associated Press reports.

Maria Alyokhina, one of three Pussy Riot members famously arrested after performing in a Moscow cathedral in 2012, tweeted that she and Olga Borisova were taken into custody by police after protesting the imprisonment of Ukrainian filmmaker Oleg Sentsov in Yakutsk, a remote city in Siberia located approximately 3,000 miles east of Moscow. END_OF_DOCUMENT_TOKEN_TO_BE_REPLACED 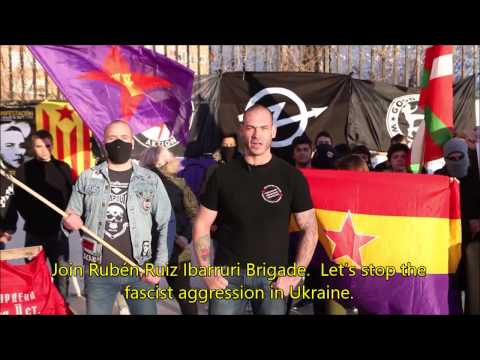 The Ukrainian government accuses of terrorism the Italian music group Banda Bassotti after a solidarity caravan to Donbass  (ver en catalan mas abajo)
The executive of Kiev demanded collaboration from various EU governments to arrest and extradite fifty activists who have recently participated in a solidarity caravan to Donesk and Lugansk regions, organized by the famous Roman rock group.

Members of the Banda Bassotti and other activists of the Caravan Antifascist some families of Donbass who distributed the solidarity aid .
by VICTOR SERRI translated from La Directa

Bringing toys to children, doing concerts, showing internationalist solidarity. These are, in the opinion of the Ukrainian government, the crimes of the Antifascist Donbass Caravan organized by the famous Italian musical group Banda Bassotti. END_OF_DOCUMENT_TOKEN_TO_BE_REPLACED

Predator Capitalism is war by other methods, but for the US those methods are fast running out.

The great scam of imposing the US dollar as a reserve and oil buying currency is falling apart as countries refuse to comply. So the gigantic debts run up by the USA by these means will finally become real and unpayable, causing a total crash.

The world economy is now like a juggler forced to throw up more and more balls into the air.

But the cocky billionaires running the US have one Ace left.. military force..  and are not averse to new wars to boost production and bully the world into line… Starting with Russia..

The lunatic logic of capitalist North America, after engineering a coup in Ukraine that will let them bring their nukes up to the Russian border,  seems to be..  BACK DOWN AND SELL YOUR OIL IN DOLLARS.. OR WE BLOW UP THE WORLD

The ultimate logic of Predator Capitalism is the annihalation of you and me. of human life on Earth, but even this is seen as a financial opportunity. billion dollar underground bunkers are  apparently selling like hot cakes to the 0.1%

continued  below. .. Nuclear Bullies face off in Ukraine

Every day the war in Ukraine gets more deadly and threatens to spiral into world war, sponsored by nuclear bullies Russia and the US. Both blocs are desperate to claw back economic advantage as the capitalist system totters to collapse under its absurd logic of infinite growth, terminal greed and conflict.

”The drums of war are beating on the BBC and other mass media,” writes Oliver Tickell – in The Ecologist  ” naked propaganda about fictitious ‘Russian aggression’ intended to soften us up for a war that could wipe out life on Earth. We must refuse to fall for the endlessly repeated lies, and tell our politicians that our highest priority of all is peace.”_drums_of_nuclear war

From the start the ‘Ukraine Revolution’ was suspicious, how many of the groups involved had been receiving US funding for years and years? Now Obama himself  has admitted on CNN that there was a ‘US brokered transition’ and that the US will directly supply arms to the new Ukraine government.

END_OF_DOCUMENT_TOKEN_TO_BE_REPLACED

The Ukraine is more or less bankrupt, ruined equally by predator capitalist western bankers and rapacious Russian oligarchs and swindlers. Now after 20 years pillage we see nationalists and macho morons on both sides playing WAR CHICKEN for the right to continue sucking the country dry for the foreseeable future.

So who is ”right”?  Both the US/EU and the Russian leaders are ODIOUS IDIOTS playing with the lives of us all for their own megalomaniac obsessions with power, prestige, rape culture and greed. END_OF_DOCUMENT_TOKEN_TO_BE_REPLACED

Below I reproduce an unattributed translation from the French anarchist publication, Le Monde Libertaire, of an interview with the Tunisian anarchist feminist group, Feminism Attack! I follow that with an earlier report about the Tunisian feminist activist, Amina Sboui, leaving the Femen group and declaring herself an anarchist. Femen is a radical feminist group founded in Ukraine which has captured some media attention through its topless protests where Femen activists paint various political slogans across their chests.

END_OF_DOCUMENT_TOKEN_TO_BE_REPLACED

AMINA MAY HAVE BEEN SENT TO A PSYCHIATRIC HOSPITAL BY PARENTS..SEE DETAILS AT BOTTOM OF ARTICLE

Radical Tunisian islamists represented by Imam Adel Almi call for death penalty by stones for young tunisian girl, who took a naked picture of herself and posted on Facebook to support FEMEN movement. 26th of February a Tunisian woman, Amina Tyler, sent an email to FEMEN with attached photo of herself in the style of FEMEN with written message on her body  “Fuck your morals!”.
The picture was posted on fan pages of FEMEN. Then Amina has created a fan page FEMEN Tunisia to support the movement from her country. Today the information about death threats to Amina from islamists was spread by mass medias, the call for death penalty was made the by Tunisian political figure and leader of the Association of centrists reforms Adel Almi. After getting info about threats for Amina FEMEN activists tried to get in touch with the tunisian supporter by phone, but the phone is switched off.
FEMEN cares for the life of a youn

Femen denounces the disastrous Islamization of Arab spring with full devaluation of all revolutionary achievements! Bearded monsters will never intimidated brave acts for freedom made by women!  http://femen.org/en